On Monday, 8 February, I saw an early honeybee on an early dandelion. On the 15th, temperatures were in the single digits. The state of Texas suffered a winter storm from the Panhandle to the Rio Grande. We were in one square mile that did not lose electrical power. However, by Wednesday night, the water quit.

Fortunately, on Monday, we had filled kitty litter pails and put them in the bathrooms for flushing. (We keep them for household moves because they store electronics, glassware, etc., very nicely.) But by Friday, when it warmed up, I refilled them all with roof runoff, again for flushing. We had enough bottled water. We keep 10 gallons in glass and refill six heavy plastic gallons for daily use. We have two Brita filters, one caraffe and one for the faucet. And we still have plenty of dry, packaged, and frozen food. Gratefully, we did lose power, though we could have put the refrigerated and frozen food outdoors for a few days, as other people did. And we have a barbeque grill and five bags of charcoal in the garage.

We expect the "boil water" notices to be lifted in a couple of days. Just in case, though, I started tap water boiling on the stove.

Emergency preparedness is a state of mind and a lifestyle habit. I was fortunate to have worked a project for the Texas Department of Public Safety Division of Emergency Management in 2014 and then go from there to a project at the Texas Military Department which took me into the Texas State Guard, which included 15 or 20 online classes from FEMA, and half a dozen live exercises, culminating in three deployments. Aristotle called deep learning "second nature."

Hurricanes, tornadoes, floods, wildfires, snowstorms, my nightmare scenario is that the Permian Basin is going to sink 500 feet and become a lava field.

The Next Hurrican Harvey

Volunteering in an Emergency: What to Expect

Posted by Michael E. Marotta at 8:25 AM No comments:

Finding binary stars has been fun and rewarding on several levels. First is the satisfaction from perceiving something that is not obvious to animal sensations. A modest telescope reveals that very many stars which appear as one are actually pairs and systems. Finding them required getting more familiar with the night sky and learning is fun. And there was discovery: even though someone else had found it first, the insight and understanding were my own.

Binaries and systems are the rule, not the exception. The stars are not randomly scattered individuals—though those do exist, even wandering rogues—but aggregations that are bound by internal and external gravity, and other forces and fields.

In the 200 years after Galileo, telescopes opened the heavens to exploration. Wanting to measure the distances to the stars, astronomers sought certain pairs, a very bright one and a much dimmer one. The assumption was that stars are randomly distributed. So, if two neighboring lights were different in apparent magnitude, the brighter one was much nearer, and therefore measurable with the instruments of the time. It was the search for parallax. After cataloguing thousands of stars and hundreds of binaries with one of the largest telescopes, while parallax measurements remained beyond our grasp, William Herschel came to understand that binaries are a natural phenomenon, not visual accidents.

Following William Thompson’s mandate,  I want to measure what I observe. In another topic I mentioned having been loaned a Baader Micro-Guide reticle. But even before that, I figured out that I could keep both eyes open and use a simple ruler to help me scale my sketches. I can calculate the field-of-view, and with a compass and graph paper, set a circle into which I can draw my observations. 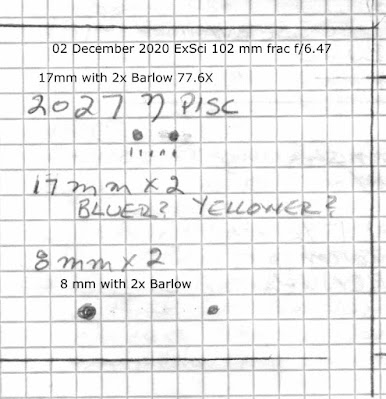 One night, while aligning on Mars,  I happened upon the binary Eta Piscium. At that point, I had followed instructions to locate five or six such objects, including the “Double-Double” in Lyra. When I saw them, they just looked like a binary. So, I noted the time and approximate location and looked them up later.

My last investigation (03 February) was Castor in Gemini, an easy double, and revealed in the largest telescopes to be a system of six.

All of that let me retrace the steps of the first pioneers in astronomy. On the one hand, I know from my own university education and from judging regional science fairs for over a decade, that we do not reward scientists for repeating and testing the works of others. We prize originality so much that perhaps one-half to three-fourths of all published papers are never independently validated, all the moreso in physics (and astronomy), less so in chemistry and sociology which are practical pursuits. So, I like knowing that the universe is pretty much as described. On the other hand, revisiting the discoveries in astronomy is analogous to the small wonder of holding an ancient coin and understanding it as a window into the cultural context of their time and place.

Posted by Michael E. Marotta at 8:51 AM No comments:

My mother was more for Chopin and Liszt and we had a lot of that, especially as sheets and books, but also on 33-1/3 LPs, eventually in stereo. So, growing up, we had at least one Rachmaninoff, the Preludes and Variation on a Theme by Paganini, perhaps. And also the Second Piano Concerto. But I never knew that until I read Atlas Shrugged in high school and my 11th grade American history teacher told me that that particular work was one of Ayn Rand’s favorites. I listened to it often while reading Atlas Shrugged through twice. To me, it is the soundtrack for the book and the soundtrack that the movie should have had.

Rand mentions it and Tchaikovsky’s First Piano Concerto in The Fountainhead, at the beginning of Part IV. We see an anonymous young man in the woods. Recently graduated from college and seeking a path for his future, he responds to the beauty of the world around him and yearns for something within himself to answer the promise in the music.

Rachmaninoff was an icon in the society in which Rand matured. In Dr. Zhivago, Yuri, Lara, Komarovsky, and Pasha are all at the very fine party in a sparkling home, while in the background, Rachmaninoff plays for the guests.

It is not that I don’t care for music (see Hallelujah here), but that I have a slight hearing deficiency. The piano worked well enough for me because you hit the key and you get the note. As open instruments, the coronet and French horn were impossible for me. In the third grade, we took a “music readiness” test in which we had to identify higher and lower notes; and once they got close, I could not tell them apart. But music is a language; and I am good at languages, dialects, and accents. I have two cassette tapes, Rachmaninoff Plays Rachmaninoff and Gershwin Plays Gershwin. You can hear covers all over YouTube and the performers are accomplished professionals. But these are not just different performers with their own subtle interpretations. They are the right way to play the music because there is no substitute for creation.

Autobiography of a Worker

Reflections on the Passings of Comrades

Posted by Michael E. Marotta at 9:34 AM No comments:

The Audacity of Entrepreneurship

"What comes out of a team or a committee is the most daring idea that the least daring man can accept." John Arnold. "Space, Time and Education," Astounding Science Fiction, May 1953, pp. 9–25. Introductory remarks by John W. Campbell, Jr., editor, pp. 9–10.

Earlier this month, I (virtually) attended a conference of the American Astronomical Society. I participate in the History of Astronomy Division. One of the presentations was about Voyager. One of the presenters sighed that the government cancelled several follow-ups to include messages on deep space probes. I asked if they had any contact with Elon Musk. The expert replied that maybe some entrepreneur in the future might launch a mini-satellite with a solar sail, but no private firm can send a one-ton probe out of the solar system. After the conference, I sent him a link about Elon Musk's Tesla two-ton automobile orbiting the Sun. That is exactly the audacity of entrepreneurship. It radiates a fundamental optimism about what is possible in human achievement.

The Public Good Be Damned

Politics and the Inverse Square Law

Disruptive Diagnostics and the Business of Science