Disruptive Diagnostics and the Business of Science

Former UT professor Tom Kodadek returned to address the postdoctoral student association of the . He met a full house of about 250. The title of his talk was “The Ups and Downs of Moving ‘Disruptive’ Diagnostic and Therapeutic Technology from the Lab to the Real World.”  Dr. Kodadek is now with the Scripps Research Institute, in Jupiter, .  Originally funded by the NIH, his work is now marketed by OPKO Health, Inc., which found the angel funding he needed to bring his theories to realization. 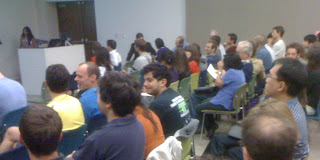 He first identified the standard approach to any drug therapy:
1. Perform basic research on the disease mechanism,.
2. Identify molecules in the blood that are unique to that disease, or whose levels change drastically.
3. Develop a specific method to measure the level of that molecule in the blood.
4. Commercialize.

This fits our standard model for diagnosis.  The patient feels bad and goes to a doctor for treatment.  Tests are run.  A cause is hypothesized and treatments begin while the patient’s course is monitored.  The shortcomings with the standard approach begin with the fact that we have to wait until we feel bad to get a diagnosis.  Also, tests are heterogeneous: any symptom suggests many tests.
Kodadek then offered a better approach.  His theory is that antigens must exist before symptoms reach perceptible levels: you are sick before you have a fever. With pre-symptomatic screening we could monitor for any active disease in its early stage, before the symptoms appear.  His recommended course is to routinely monitor the levels of dozens of disease-specific antibodies as part of any periodic medical check-up.

To achieve that, we need to develop a large, broad, and deep array of synthetic artificial molecules that act as antigen surrogates. This is possible through combinatorial chemistry.

He then rapidly outlined the some of the details of his methodology for the audience of post-doctoral biologists at the before re-aligning his presentation to the business community.

Having left the of , he thought that he was about to go to to present his ideas to venture capitalists.  However, he first was invited to speak to a group at  the Scripps Research Institute.  Feeling somewhat challenged to be sharing the stage with six Nobel laureates, he thought that he handled it well.  After the talks, the president of Scripps, Dr. Richard Lerner, came up to him and graphically explained that he was about to get screwed. Dr. Lerner introduced him to Phil Frost of OPKO Health, Inc.

Opko had just suffered a failed third-stage test of a major product initiative.  Phil Frost had a company in need of new work.  Opko also acquired Cytochroma, Inc., a company with “a suite of products for treatment of secondary hyperparathyroidism and hyperphosphatemia in chronic kidney disease patients.”  Another Cytochroma product screens for vitamin D deficiency.  In fact, said Kodadek, we may find that we are in the midst of an epidemic and not know it because we only now are coming to understand the many functions of that essential nutrient.

Tom Kodadek with his friends at the Reception

Dr. Thomas Kodadek closed by  summarizing his experiences. “Work on important projects, not widgets. Incubate for as long as possible in the university before taking your work to the market.  Angel investors are better than venture capitalists.  Focus early on the people you bring in to start the organization.”

Following the talk the hosted a reception.  About 50 people attended.  I met old friends Maggie Bishop of the Austin Chamber of Commerce, Benjamin Grosse-Siestrup of Antimicrobial Test Laboratories and Ken Russell of Metabolic Therapy, as well as new acquaintances Dr. Gregory Daniel Frank of XBiotech, and Dr. Priya Sridharan of the UT department of Microbiology and Molecular Genetics, and neurobiologist Dr. Sangeetha Iyer. (Dr. Iyer and I actually crossed paths in 2012 during South by Southwest. I was flattered that she remembered me.)
Previously on Necessary Facts
BioBash: Chamber Replicates Success
Austin Winter 2012 BioBash
BioPunks: DIY Scientists Hack the Code of Life
Bob Swanson and Genentech
Epigenetics
Mayim Bialik