The Science of Liberty

The Science of Liberty: Democracy, Reason, and the Laws of Nature by Timothy Ferris is excellent assembly of cogent essays is an extended argument for freedom and science. The scientific revolution and liberal democracy are inseparable.  To limit one is to defeat the other.  According to Ferris, the scientific method is the root of political freedom.  In that, he continues the case made long ago by Karl Popper in The Open Society and Its Enemies.

Like Popper, Ferris misses the center of the target.  It is not “liberal democracy” but capitalism that enabled and was empowered by the Enlightenment philosophy of rational-empiricism that we know today as Objectivism. To be fair, though, Ferris does devote an entire chapter to “The Science of Wealth” where he praises both free market capitalism and Adam Smith’s Wealth of Nations.

Anyone who values freedom and science will find this book is well worth the time invested.  The essays are crisp, insightful, and backed by citation.  While Ferris does good work building up the material benefits of the scientific method and the human values in liberal democracy, the core of the book is a total demolition of claims that centralism and totalitarianism can lead to good science.  In one chapter, plus other material throughout, Ferris shows that Nazi Germany and Soviet Russia were scientifically bankrupt, and technologically inferior to the liberal democracies they opposed.

In just under 300 pages, Ferris delivers a close and informative history of the scientific method, centered on Sir Francis Bacon's creation - and betrayal - of it.  Ancient Greeks such as Aristarchos and Demokritos, guessed correctly, reasoning well, that the Earth orbits the sun, and that matter is comprised of atoms.  But that was not science.  Science is a method of observation, questioning, investigation, tests, and reporting.  (To see why Aristotle's description of the chick embryo does qualify as science, see my review of Great Scientific Experiments, here.)  Science did not exist before the Renaissance; the creation of science led to the political Enlightenment. Like the chicken and the egg, of course, which came first is a moot point: you cannot have one without the other.  More to the point, Ferris argues well, the essence of liberal democracy, what it is that makes freedom work, is precisely the scientific method applied to social problems. 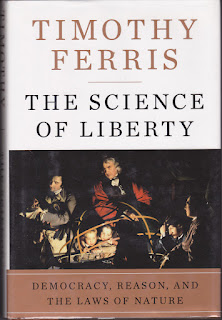 That said, Ferris is well aware of the essential weakness in liberal politics: experimental programs become permanent.  According to the scientific method as applied to civics, we, the people, vote on certain remedies, try them out, and if they fail, we pragmatically try something else.  Actually, that last never happens.  We go on to new attempts, but the old failures continue to be funded and staffed and enforced.  He has no solution for that.

Ferris does deliver a good history, especially of the American revolution as the triumph of citizen scientists.

In another chapter on “Academic Antiscience” Ferris reveals how Karl Popper’s theory of falsification and Thomas Kuhn’s theory of “paradigm” were misapplied at first innocently, and then wantonly, by “post modernists.”  Claiming that theirs was an agenda of liberation, Paul Feyerabend and those who followed him quickly moved on to demanding an end to science and an end to material prosperity.

Supplementing that demonstration is a chapter on Progress.  Post-modernists decry and deny it.  They claim that material progress leaves us spiritually impoverished.  Politically, they claim that progress is illusory, being only the looting of the poor by the rich. Ferris takes the second claim and shreds it with facts.  Even if the claim were true that the rich are evermore far richer than the poorest, the sheer numbers of the poor, multiplied by their material advantages today, bury any claims to injustice from progress.  The poorest are far better off than they were 50 or 100 years ago.

The book closes with a chapter on global warming and the consequent ice age that will come “unless we do something.”  What is that “we” must “do” is less clear.  Once again, Ferris is mindful of the precarious state of the world’s poor.  Reducing greenhouse gases, however accomplished, must not come by taking their lives. Who can afford to make which sacrifices today in order to secure the future is a tough question for which Ferris has no answer.

“The point is that lightswitch ethics—pounding the table and insisting, “We must save the lives of our grandchildren” or alternately, “We must leave free enterprise alone”—are inadequate. … Responsible stewardship requires dealing in quantities and probabilties, with little recourse to comforting certitudes.”

ALSO ON NECESSARY FACTS
Seeing in the Dark: Your Front Row Seat to the Universe
Science versus Common Sense
Slow Down and Think
Criminalistics: Science or Folkway