Syriaphobia: the latest fad in collectivism

It has been claimed that at least one of the terrorists of Paris November 13 hid among Syrian refugees to gain entrance into Europe. On the basis of that, some (Republican) governors of American states have declared that they will not accept Syrian refugees sent to them by the federal government. But immigrants to America have been associated with crimes since 1492. Immigrants also bring enterprise, initiative, invention, and, most of all, descendants.
In the wake of the French Revolution, Federalists and Republicans both supported and opposed the immigration of French refugees, depending on who was referring to whom.  To the Federalists, the French Revolution was the expression of everything evil in democracy.  However, many of the refugees were aristocrats, fleeing the Terror.

(And that is another point for another essay: Terrorism, as we understand it today, was invented by a native government. The Reign of Terror was not imported from Arabia.)

Those aristocrats were worrisome for the Republicans whose sympathies were with the Revolutionaries. However, the Revolutionary government of France sent spies. Its envoys interfered in American politics,  attempting to influence our foreign policy. For all of that, and more, see the website of the Office of the Historian of the U.S. Department of State here.
Long established as proper Bostonians, the English in America were appalled by the Irish immigrants of 1848. They lived like animals, bred like animals -- and bred crime. Or so the English of Boston claimed. Among the consequences of Irish in America was the cliché of the Irish cop, established following the War Between the States, and enduring even today. Another cliché was the Irish army sergeant.

Many had enlisted in the North and South in order to obtain military experience that they could take home to fight Great Britain. Many more stayed here. And their descendants supported terrorism for over 150 years. With the founding of Sinn Fein in 1905, evermore American money flowed into the conflict.

We worry today about Arab Americans and Islamic Americans supporting terrorism now, but no one was concerned when “professional Irish” in America paid for revolution in Ireland and terrorism in the United Kingdom.
They were not alone. In the 1930s and 1940s, both Nazi Germany and Communist Russia maintained huge networks of supporters. It is also quite likely that the USSR insinuated its agents into the stream of European refugees from World War II. Similarly, communist agents probably were among the Vietnamese. We know that China sends its operatives in as students. Disturbing as that is to consider, actual harm is harder to prove.

Homegrown socialists, whether Fascist, Bolshevik, or others were common enough. Our coinage of the era should appear shocking to any thinking person today. It was not an accident: many progressives and intellectuals of the late 19th through mid-20th centuries were collectivists. In Aldous Huxley’s Brave New World, the clones were named after great collectivists of the times, Polly Trotsky, Lenina Crowne, and Benito Hoover, and others. In our time, the political leaders charged with defeating ISIL actually share many of its philosophical foundations: mysticism, revelation, altruism and collectivism, and ascetisim.
Among the spies for the USSR was Samuel Dickstein, a US Congressman and New York Supreme Court justice. Meanwhile Prescott Bush, scion to the presidents of our time was able to get out of being implicated in a Wall Street Coup against President Roosevelt.  The German-American Bund pushed the Nazi Party line here at home. It only resulted in more anti-German sentiment.  Unlike the Japanese, the Germans were not put in concentrations camps - it was a possibility. In the movie Wings, about World War I, when the comic German, Arnold Schwimpf enlists with his buddies, the recruiting sergeant (an Irishman) says, "If you ask me, all you Dutchmen ought to be locked up until this thing is over." Those were heady times.  And America survived.

Ayn Rand used the term “muscle mystic” (likely invented by Nathaniel Branden) to explain people who worship brute force. They thought that seizing factories would make them productive. They saw goosestepping rows and columns followed by arrays of tanks and mobile artillery, and accepted that whoever brandished them must be strong. In fact, reality and reason required that the Nazis and Communists would fail. So, too, is ISIL's program ultimately unworkable.

According to the news reports now about the Paris bombings, this murder of 180 people was carefully planned and executed over months.  Over 700 million people live in Europe, about 68 million of them in France. A million years will not be enough time for the terrorists to kill everyone they dislike.

Meanwhile, immigrants to Europe and the USA and everywhere else bring valuable human capital away from ISIL.

Yes, some may be criminals, as were the boys at Five Points, the Purple Gang, and the Mafia. It is a fact of human population distribution, however, that there must be at least as many Kennedys, Reagans, Einsteins, Fermis, Scalias, and Ayn Rands. And the creative work of good people outlasts  the destruction by evil people.

It is an axiom of criminology that "crime knows no neighborhood." In other words, no place, no population is especially criminogenic. Crimes are committed by individuals who make bad choices. That is why Dr. Martin Luther King's dream was a world where a person is judged by the content of their character, not the color of their skin. The basic error, the fundamental fallacy, is considering masses of people as collectives. Including or excluding groups, tribes, ethnicities, etc., is the wrong way to consider the question. In point of fact, US immigration policy requires each legal immigrant to prove their case on their own merits. That is appropriate.

Posted by Michael E. Marotta at 06:48 No comments:

We are Texans serving Texans.
We are volunteers for you.
We are the Texas State Guard.
We’re the red, white and blue.
The Lone Star shines within us.
We’re always more than equal to the task.
Your community is in our care.
To republic and union we are true. 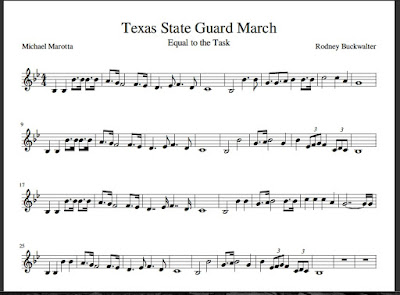 We are Texans serving Texans.
We are volunteers for you:
Medical Rangers and Maritime,
Army and Air Components, too.
Faithful and constant in hardship,
First responders, we are stronger than steel.
Your community is in our care.
To republic and union we are true.

Posted by Michael E. Marotta at 02:28 No comments:

An asterism is a recognizable group of stars that is not accepted as a constellation by the International Astronomical Union. The Big Dipper is the perfect example: it is part of Ursa Major. The Dipper, the Wagon, or the Plough was recognized as a distinct image by various peoples in what is today “Great Britain.” To ancient people in modern Finland, it was a net. To some native Americans (Ojibiway or “Chippewa”) the bowl of the Dipper was a Bear, and the three (or four) stars of the Handle were cubs trailing, or else hunters in pursuit. Mizar was supposed to be one of the hunters, and Alcor was the pot in which the Bear was to be cooked, something of a challenge to be sure - hunters are optimists.

In that utility, asterisms remain important to the societal institution that we call astronomy. Certainly, the physics of astronomy also must remain important. We are not merely gaping open-mouthed at the splendor of the night skies like slack-jawed anthropoids. However, the sociology of the science of astronomy is a different pursuit entirely. Papers published in peer-reviewed academic journals may or may not illuminate the thrills and wonders of the night sky. The distinction between an asterism and a constellation must remain a modern nicety. After all, nothing about these is actually written in the stars. We decide what images to see when we connect the dots.

It is true that some of them do look similar to things we know. The first three recorded constellations were the Bull, the Lion, and the Scorpion. They marked the year in old Sumeria. But the head of the Lion is also the Sickle... and the poor Scorpion lost his powerful claws when the Romans invented the constellation of Libra: 12 constellations, for 12 months, for 12 gods, 12 ounces to the pound, and a dozen more that made them feel that the universe is an orderly place. And, indeed, it is. Just look at the night sky.

"Frosty November is often called the month of the Pleiades, because it’s when this star cluster – sometimes called the Seven Sisters – shines from dusk until dawn." -- here from Earthsky.org

Astronomical Symbols on Ancient and Modern Coins
The Drunken Astronomers
Turn Left at Orion
Seeing in the Dark: Your Front Row Seat to the Universe

Posted by Michael E. Marotta at 07:26 No comments: