It took five hours over four nights to figure out how to get an image with my new iPhone 11.  I gave up trying the smaller telescopes, a 2-3/4 inch refractor and a 5-1/4 inch reflector. Just attaching the phone knocked them far out of alignment and I had to retighten the bolts against the extra weight. So, I turned to a large 8-inch Maksutov catadioptric that I borrowed from the Austin Astronomy Club. That, at least, had good inertia.
The next problem was focusing. The iPhone 11 makes a lot decisions for you. And it has a lot of options. It all just gets in the way.
The Austin Astronomical Society featured a guest speaker a couple of months ago who talked about astrophotography. He kept waving his iPhone around saying, "All you need is one of these. All you need is one of these." Well, behind him was an electric guitar. So, this was a dextrous dude. No wonder he finds it easy.
My current project is working my way through Astronomy Activity and Laboratory Manual by Alan W. Hirshfeld. The arithmetic, algebra, and trigonometry are easy, but real the fun is in following the logic and discoveries of the Paleolithic people, Aristarchus, Copernicus, and Kepler, up through Hubble, to measure the day, the distances to the Sun, the Moon, the planets, and beyond.
It is true that the telescope is a wonderful instrument. Last week, I again observed the star group catalogued as Messier 7, called "Ptolemy's Nebula." Ptolemy knew it as a permanent cloud, just as other ancients catalogued the Andromeda Galaxy as a fixed patch of something. The first telescopes allowed many of those sparkly patches to be resolved into collections of individual stars.
Andromeda was not resolved into a flat disk until our century and it was not so much the 100-inch telescope as it was the photographic plates that made that possible. So, photography is important and useful. That being as it may, only in 1924 did Edwin Hubble rely on Henrietta Leavitt's work with Cepheid variables (1912) to demonstrate that Andromeda is another "island universe" 860,000 light years away.
I distance myself from the hobbyists who stack images and photoshop the colors to produce artwork that is not science. Perhaps even more to the point, Astronomy magazine for August 2020 has a glowing review of the Stellina imaging telescope. This robotic camera "captures and stacks exposures to create ever-more-detailed celestial images." You do not even need to know a single star or constellation. The database does all the work.
PREVIOUSLY ON NECESSARY FACTS
Astrophotography and Me
The Andromeda Galaxy
M-44 Beehive Cluster First Sighting
Seeing in the Dark: Your Front Row Seat to the Universe
The Perfect Machine
Newton versus the Counterfeiter
Posted by Michael E. Marotta at 5:00 PM No comments:

The GOP as Pushy Beggars

That Donald Trump is a bully is obvious. His influence on the Republican Party and conservatives is also apparent. Back in late October 2016 when Trump’s election was still in some doubt in the minds of Democrats, at a press conference in Michigan, Michael Moore explained in clear language why Trump would win: Donald Trump brought to the polls millions of disaffected non-voters and other centerists whose personal losses and disappointments opened them up to a Leader making Promises. Now, the Grand Old Party attempts to energize its loyalists by reacting as a victimized bully.

Back in 2007, I was elected as a Republican precinct delegate from Ann Arbor Township. It was pretty easy. Ann Arbor is heavily Democrat. There were six slots on the GOP side of the ballot and I was one of four people running. Before moving here, I joined the Austin Tech Republicans luncheon club. Since then, I have been registered on both sides depending on the candidates in the local elections. Austin is heavily Democrat, but sometimes it is important to send the GOP leadership a message in a primary. The same is true of the Democrats. In 2016, I voted for Bernie Sanders as a vote against Hillary Clinton.

Because I still have my Ann Arbor cellphone number, I have been getting these text messages from the Republicans. Their strategy reveals their soul. (And, yes, I block each one. They use a different number the next time.)

Aggressive beggars kept us from moving to Portland, Oregon. Back in 2010, after completing an associate’s, a bachelor’s, and a master’s, work was still hard to find in Michigan. So, we looked around. Portland was nice. The beggars were hard to take. They followed us on the street; sometimes they stood in front of us. Austin was different. With four months of 100-degree highs and no rain, brown was the new green. The beggars in the medians were selling ice water. I liked that entrepreneurial spirit.

Despite the political narratives to the contrary, government in Texas follows the Taxachusetts model. Our senior federal senator, John Cornyn, never met a new law he did not like. We got a problem? Make it illegal. The state legislature made it illegal to buy Tesla automobiles by making it illegal to buy a car from a manufacturer who did not have a dealership in the state. It was the Texas automotive dealers association who got that passed in the Republican-controlled state legislature and signed by the Republican governor. That was changed a couple of years ago. Tesla is in orbit now and that plays well in Houston.

Working on a state agency project now, I have been diving into the Texas Compiled Laws, especially the Texas Government Code and the Texas Administrative Code. We have a franchise tax here. If you license your music or your painting or your poetry, you pay a tax on the income. But, if you license mineral rights, you are exempt from the franchise tax. That’s what makes fascism more successful than socialism: they know whose bread to butter.

The root of the problem is that in essence fascism is just another kind of socialism. Right wing syndicalism and left wing syndicalism are mirror images. Whatever the shades in their rainbows, the radiation is on the same spectrum.

July 14 -- Bastille Day. I am not going to post all of these as they keep coming in, but this is starting to sound like On the Waterfront. 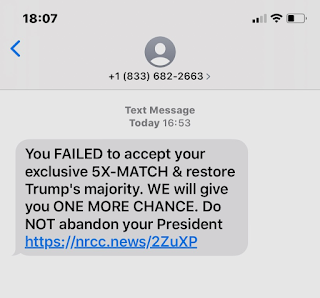 In Support of Paid Political Advertising

President Trump and the Military

Posted by Michael E. Marotta at 8:41 AM No comments:

From the Declaration of Independence

We hold these truths to be self-evident, that all men are created equal, that they are endowed by their Creator with certain unalienable Rights, that among these are Life, Liberty and the pursuit of Happiness.

--That to secure these rights, Governments are instituted among Men, deriving their just powers from the consent of the governed,

--That whenever any Form of Government becomes destructive of these ends, it is the Right of the People to alter or to abolish it, and to institute new Government, laying its foundation on such principles and organizing its powers in such form, as to them shall seem most likely to effect their Safety and Happiness. 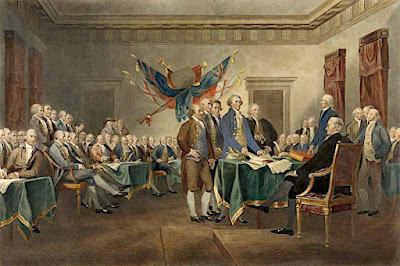 Prudence, indeed, will dictate that Governments long established should not be changed for light and transient causes; and accordingly all experience hath shewn, that mankind are more disposed to suffer, while evils are sufferable, than to right themselves by abolishing the forms to which they are accustomed.

He has endeavoured to prevent the population of these States; for that purpose obstructing the Laws for Naturalization of Foreigners; refusing to pass others to encourage their migrations hither, and raising the conditions of new Appropriations of Lands.

He has made Judges dependent on his Will alone, for the tenure of their offices, and the amount and payment of their salaries.

For cutting off our Trade with all parts of the world:

For transporting us beyond Seas to be tried for pretended offences.

And for the support of this Declaration, with a firm reliance on the protection of divine Providence, we mutually pledge to each other our Lives, our Fortunes and our sacred Honor.

The Science of Liberty

Libraries of the Founders

The Land of the Free and the Home of the Brave

Posted by Michael E. Marotta at 2:04 AM No comments:

We buy this brand of meats at the Wheatsville Co-op here in Austin. I was fixing dinner last night and the pun occurred to me. Ground bison. Water buffalo. Air hog.
Isaac Asimov's "Jokester" rested on the premise that puns are original to humans and that all other jokes are experiments by aliens. We laugh at jokes. We groan at puns. There is no such thing as an original joke; they are all variations of a known joke. Puns are typically spontaneous. 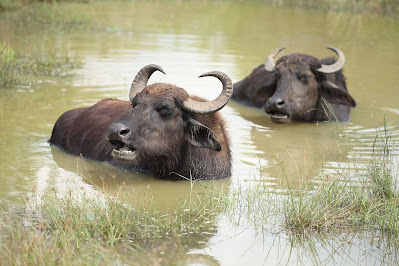 Water Buffalos from National Geographic
One day, one of the technicians in the fabrication shop said that in the bottom of a controller, he found a bag of dirt labelled with the electronic symbol for "ground."
When it is never going to happen we say, "When pigs can fly..." But like Pegasus and dragons and other chimeras, the flying pig is an archaic Greek image.
The funny thing about Pegasos, and (when you stop to think about it) angels, zombies, cystaline silicon-based aliens in hyperdrive spaceships, and whatever else we imagine, it all comes down to real attributes of real entities, just mixed up. We cannot imagine the unreal. The unreal cannot exist.
Entities that do not exist could be potentially real. The fluorescent lightbub is a perfect example. Absent an actual working device, even Aristotle or Newton would require a lot of argument to accept the potential reality of such an object. You think that's a challenge? Try telling your Century 21 broker about the real value of ground bison.
PREVIOUSLY ON NECESSARY FACTS
Big Bang Theory: More Friends than Seinfeld
America Surrenders to North Korea
The Ferengi Rules of Commerce
Visualizing Complex Data
Happy Pi Day of the Century
Posted by Michael E. Marotta at 3:29 PM No comments: