Newton versus the Counterfeiter

Intended for a general readership, this book rests on an extraordinary foundation of careful scholarship.  Newton and the Counterfeiter: The Unknown Detective Career of the World’s Greatest Scientist by Thomas Levenson (Boston/New York: Houghton Mifflin Harcourt, 2009). 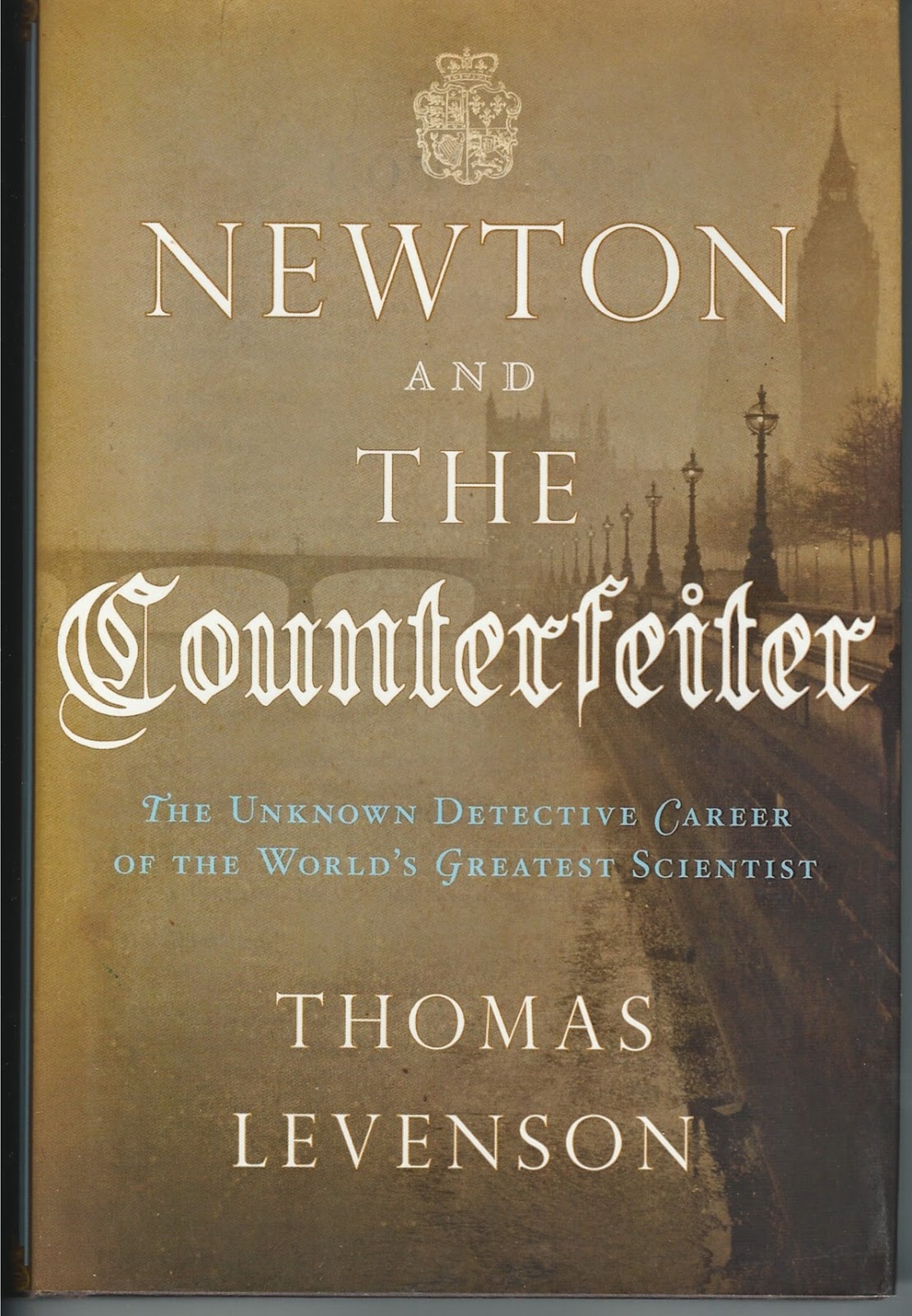 Thomas Levenson teaches science journalism at MIT. He has been granted special recognition for his Public Broadcasting Service (PBS) documentaries. Among those is a Westinghouse award from the American Association for the Advancement of Science, which he shared with co-producer Paula Apsell, for the 1992 PBS “Nova” presentation, Eclipse of the Century. In 2005, the National Academies honored Levenson with a Communications Award for his PBS mini-series production, “Origins: Back to the Beginning,” about evidence for the ontology of life. He knows science; and he knows how to present its difficult facts and complex theories.
This lively historical narrative of criminology and jurisprudence animates Sir Isaac Newton’s career as a detective and prosecutor. Levenson delivers to print the videographer’s impact of sight and sound. Levenson introduces us to Newton in a series of establishing shots, pan-and-zoom vignettes that sketch and detail the events spotlighting the intellectual and emotional development of the man easily nominated as the greatest scientist. You walk down the alleys and into the pubs where Sir Isaac Newton investigated crimes against the British Royal Mint which he served as warden and master.
Levenson opens the book by outlining Newton’s intellectual and emotional development. Complementing his work in mathematics, astronomy and optics, Newton also experimented with alchemy, performing purifications and alloys of metals. Emotionally, Newton’s isolation was rooted in self-abnegation. The hint of a homosexual dalliance comes as an instantaneous action, the lifelong reaction to which only distanced his social relations to ethereal planes. You could get no closer to Newton the man than you could to the Man in the Moon. Thus, this combination of unflinching pursuit of difficult theoretical and empirical truths, bulwarked by a stellar disregard for other people’s feelings made Newton the perfect prosecutor.

The counterfeiter, William Chaloner, was Newton’s opposite. A runaway apprentice whose first lawful skill was making nails, Chaloner found London to be a probabilistic cloud of moral relativity whose potentials suited his self-indulgence. For William Chaloner, counterfeiting coins was only one craft in a wider enterprise. In the language of the day, Chaloner called his swindles “funning”. He funned the Mint with counterfeit coins, and the Bank of England with fake paper, both bank notes and drafts. When his counterfeit notes were discovered, he turned informant, not only avoiding prosecution and prison, but being granted £200 in reward. Accused by informants of counterfeiting, Chaloner won the first courtroom skirmish, humiliating Newton. Consequently, Chaloner erroneously considered himself Newton’s equal; and his complex, long-range plans were but moves in a game designed to give him access to the Mint in order to coin for his own profit.

Before Newton, the posts of warden and master were only sinecures for the favored who then further stocked their own larders at public expense. They were not exceptions. Married to sisters, the master smelter and the assay master were brothers-in-law, living beyond the limits of their official salaries, inferentially guilty of conspiring to pass debased silver into the official coining operation. The vector that impelled Newton’s trajectory was the sale of dies from the Mint to counterfeiters on the outside.
Whether Newton’s career as a detective and prosecutor is “unknown” is putative. While most readers here probably know of his Three Laws of Motion, his work at the British Royal Mint is less often taught. Biographer David Berlinksi (Newton’s Gift: How Sir Isaac Newton Unlocked the System of the World, New York: The Free Press, 2000) called Newton’s tenure at the mint uninteresting. Numismatists, who study the forms and uses of money, feel differently.

Levenson acknowledges the works of Sir John Craig. Craig’s book, Newton at the Mint (Cambridge, 1946) is catalogued by the libraries of both the American Numismatic Society and the American Numismatic Association. Levenson also cites two other Craig monographs, "Isaac Newton—Crime Investigator", Nature 182, 149-52; and Isaac Newton and the Counterfeiters, 18 Notes and Records of the Royal Society 2, 136-45 (1963). When I proposed a review of the Levenson book to the Numismatic Bibliomania Society, editor Wayne Homren shot back: “How does it compare to Craig?” Levenson draws on the same sources as Craig: Newton’s papers, the mint archives, court records, a biography of Chaloner, Chaloner’s own petitions and letters. Where numismatist John Craig presented the facts, videographer Thomas Levenson brings them to life.

Nonetheless, graphical animation can be dangerous. Of Newton’s meeting in a pub with an informant, Levenson says, “The detective swallowed his irritation.” (P. x.) Did he?  Was that recorded?  “For Newton’s part, this first encounter with Chaloner did not register very deeply.” (P. 157.) The storyteller’s power depends on many such inferences and inventions. The salient question is: Does the poetic license that is extended to creative non-fiction jeopardize the truth?
Of course, we have the compiled confessions of the accused and the accusations of informers whom Newton interrogated. Yet, those folios are decidedly incomplete. We know that many were burned. To explain why official records were destroyed, Levenson leaves the main narrative to establish a historical context for the use of torture in interrogation, a subject of some immediacy to us. Newton could not resort to extreme methods, but the actual tactics are lost because the documents were burned according to the reports of Sir Isaac Newton’s secretary.
Whether William Chaloner was factually guilty may never be known. It is accepted that William Chaloner did not get a fair trial. “Chaloner was sentenced to death, very fairly on his record, unjudicially on the evidence …” (Craig, 1963; P. 143.) Levenson concurs. William Chaloner was accused of crimes committed in London. “And yet Chaloner faced charges brought by a Middlesex grand jury, being heard by a Middlesex trial jury. How could such a court, Chaloner asked, address crimes committed outside its jurisdiction?.” (P. 231.)
Our modern experience with wrongful convictions throws a harsh light on the testimonies of jailhouse snitches, casting shadows of doubt. Yet, those informants were the only source of Newton’s evidence against Chaloner. Prima facie evidence is easy to accept. Chaloner probably was guilty, but certainly did not get a fair trial by modern standards. Moreover, our sociological context also condemns much else of that time and place. We do not horribly execute counterfeiters. Chaloner was drawn and quartered.


As a casual read, the book can be enjoyed in a couple of hours. No reference numbers or inline citations encumber the text. The Notes are all in the back with concordance by page number and key words. Some readers will find profitable cause to linger there and reflect.