The Living Fish Swims Under the Water

My Google email account associated with this blog is uszik11@gmail.com.  It is a pun. I took USZIK ELEVEN from what is supposed to be one phrase mutually intelligible in Finnish, Estonian, and Hungarian.  “The living fish swims under water.” You can google the phrase for articles dedicated to it.

The proposition was offered by Mall Hellam, a scholar from Estonia who has taken on a fight for the cultural traditions of ethnic minorities within western Siberia. In those lands, native peoples speak languages that are similar to Hungarian, Finnish, and Estonian.  Over the years, I acquired books and articles about the languages of the Ostyak, Vogul, and others.  I recognized words that I learned in Hungarian, such as “kutya” for dog.
"Linguistic roots common to both branches of the traditional Finno-Ugric language tree (Finno-Permic and Ugric) are distant. About 200 words with common roots in all main Finno-Ugric languages have been identified by philologists including 55 about fishing …"
Wikipedia here: https://en.wikipedia.org/wiki/Finno-Ugric_languages

“The Dying Fish Swims in the Water” in The Economist here: http://www.economist.com/node/5323735
(Article is about the suppression by the Russian central authorities of native cultures in northwestern Siberia .)

Mall Hellam biography (in Estonian) here:
https://et.wikipedia.org/wiki/Mall_Hellam
(The Latin words “Information” and “Institute” are easy to spot. The Finns and Estonians must have had some contact with the Czechs in the distant past, and apparently stole all the vowels from the Czech   language and brought them back to the Baltic lands.)

PREVIOUSLY ON NECESSARY FACTS
Sandor Korosi Csoma
What is Literacy?
The Problem of Cultural Patrimony
Money as Press and Speech
Libertarians and Racism

Why Do Young Women Growl?

If you listen to young women, about age 35 and below, you will notice that they growl.  They also end every sentence and many phrases with an uplifting question tone.  The two mannerisms combine to deliver a distinctly female way of talking that is also demarcated by age. Whatever their other sins, Sarah Palin and Elizabeth Warren do not growl.

You can hear this on the radio, especially news radio, and most especially on public radio.  I do not know that this affectation is a cultural consequence of progressivism.  But that is where I hear it because that is what I listen to on the radio.  We have a Fox radio affiliate here in Austin, KLBJ-AM/FM, but the only deejays I hear there are middle aged white men.  And I do believe that this does cross ethnic lines: from certainly some to perhaps many young Black women who are college educated also mimic this linguistic artifact.

I noticed this first perhaps five years ago.  But thinking back, I suspect that this began in California with the “Valley Girls” of the 1970s.  I finally decided to log a few convenience samplings for my citations. We have several non-profit radio stations here in Austin, and our NPR affliate is KUT-FM.

NPR All Things Considered
Melissa Block
“Going for the Gold…”
(September 8, 2016)
http://www.npr.org/sections/thetorch/2016/09/08/493111873/after-going-for-gold-athletes-can-feel-the-post-olympic-blues
What is interesting here is that the first two women that she interviews also growl.

Perhaps the best offender I found right away is Alyssa Rosenberg  of the Washington Post. She was interviewed for her series “IN POP CULTURE, THERE ARE NO BAD POLICE SHOOTINGS:  DRAGNETS, DIRTY HARRYS AND DYING HARD: PART III” which was published on Wednesday, October 26, 2016, and for which she was interviewed on NPR’s “All Things Considered” Thursday, October 27, 2016, by Kelly McEvers. McEvers also growls, but Rosenberg is deep into it. Here: http://www.npr.org/2016/10/27/499637421/washington-post-reporter-explores-how-pop-culture-influences-views-of-police

I could suggest several origins.  For one thing, we all project tentative, unproven beliefs. “I think, like, maybe, there is no God?, in the traditional sense?, but there might be a Higher Power? out there on, like, a higher metaphysical? plane.”  That just begs for growling and upward tones.  Valley Girls of the 1970s would have been unsure about homework but certain about make-up and clothing, like ya know what I mean?

Regardless of the etiology of this linguistic disease – if it is that and not a mutation? with survival benefits?—it remains a cultural artifact.  I first learned of this studying Japanese.  (I had two college classes in "Japanese for Business" before working for Kawasaki and Honda.)  Japanese women speak in different tones than Japanese men. They also have different words for the same things.  I understand that this phenomenon of gender differentiation in active language is not limited to the Japanese, only that I learned of it while studying their language and culture.

ALSO ON NECESSARY FACTS
The Virtues of Aviation Culture
Police in a Global Culture
A Culture of Reality, Reason, and Freedom
The Problem of Cultural Patrimony
Posted by Michael E. Marotta at 6:10 PM No comments:

Dated at 2360 BCE, Sargon of Akkad eclipsed the Sumerian kingdoms along the Tigris and Euphrates. In Akkadian SALIMUM ALLAKUM means “peace will come.” Today, even among Turkic peoples of central Asia, the common Arabic greeting has been adopted into the local culture as one word: SALOMALEIKUM–“peace be upon you.”  It is nearly the same in Kyrgyzstan, the first western neighbor of China: ASALAMU ALEYKUM (two words).  But those are not native to those Turkic people, either.  They inherited them when they adopted the Muslim religion of the Arabs, who were and are Semitic.
The word for “seven” in Akkadian is SEBE.  It has not changed much in over 4000 years. The Indo-Europeans found it convenient. The word “number” comes from “name-bearer” and these early peoples, Semitic and Indo-European, shared a margin where the Hittites met the Akkadians. The earlier Sumerians had their own merchant colonies within Hittite cities and it was the Sumerians who invented the naming of quantities.  Everyone else stopped with “one, two, many.” When the Akkadians conquered Sumeria, they adopted the cuneiform script and much else that went with it.  The Akkadians borrowed words from the Sumerians, also a common occurrence, among them those for Crown, Palace, and Scribe.

Dog was KALBUM like the modern “Caleb” a man’s name in the Bible or “kalib” in modern Arabic.

House was BITUM like the later root “beth” as in Bethlehem or Elizabeth. It is seen the second letter of our alphabet: Beta from the Phoenician letter which was a pictograph of a house.  Their letters were called Ox, House, Camel, Delta, … as in modern Hebrew:  Aleph, Beth, Gimel, Daleth.

The common Arabic man’s name HABIB (beloved) is found in the Akkadian word KABTUM.  Like the Indo-European languages, the Semitic have a tie from the aspirated Ha to the harsher (velar) Ka. We see it in Latin, Spanish and Italian CARA which are the English WHORE and German HURE with French in the middle with CHER.  K-H is also found in words common to Finnish and Hungarian.

Posted by Michael E. Marotta at 7:52 AM No comments:

A Moment of Science Fact as Science Fiction

The picture that appeared on Reuters.com was startling familiar.  "My god! Someone built the Time Tunnel!" I thought.  But, it was actually the shrinking machine from Fantastic Voyage that NASA did not build.  What they did announce was preparations for the James Webb space telescope.  And congratulations are appropriate.

Posted by Michael E. Marotta at 4:39 PM No comments:

The Shannon Brewing Company’s local representative, Sam McClelland, was at the Guadalupe store of Wheatsville Co-op here in Austin last Friday.  I met him as I stopped in to get food for the long drive home down Lamar Avenue. (I had other shopping to do that took me off route. And Austin City Limits Live was enjoying their second weekend this year; so, traffic was worse than usual.) A couple of sips of good beer helped, also. 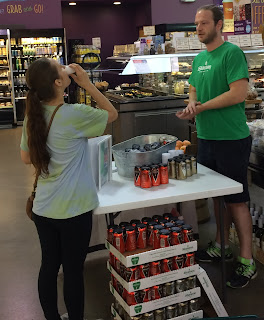 Shannon Brewing Company is two years old.  Sam said that they have been popular in Dallas and are now branching out across Texas.  I think that they will do well. When I moved here in 2o11, I was not impressed with the beers.  The Prohibition Wars were fought in Chicago, not Houston, for a reason. In the five years since, I have found quite a few worthy brews and Shannon is one of the best.


I tasted their Irish Red and Honey Porter.  The Red was flavorful, not hoppy, with a light grainy aftertaste.  The Honey Porter was surprisingly light and also not cloying the way other honey brews can be.

On their website, they say:
Lets face it, beer is mostly water so brewing with the purest, best-tasting water we can find is a pretty good starting point. Shannon Brewing Company shares 20 acres of land with Samantha Springs, a natural source of exceptional drinking water. We secured the rights to brew our beer with pure Samantha Springs water — straight from the spring, through our filtering system, right into our brewing tanks — no chlorine, fluoride or any other treatments…just pure spring water.

At Shannon Brewing, we prefer two-row barley — the plumper, sweeter and usually more expensive version, which brings a full-bodied sweetness to the beer. It also provides a larger and stronger husk that is imperative to our natural filtration methodology. We will never compromise great flavor to save a few dollars. --http://shannonbrewing.com/ingredients/

Posted by Michael E. Marotta at 7:53 AM No comments: