I can see by your coat, my friend, you're from the other side. There's just one thing I have to know. Can you tell me, please, who won? 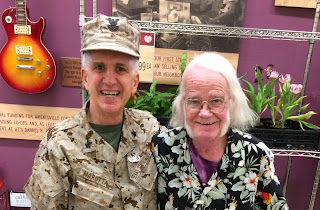 Won't you have some of my purple berries? I've been eating them for six or seven weeks now; haven't gotten sick once. Probably keep us both alive.

Posted by Michael E. Marotta at 3:38 AM No comments:

Rebels: A Well Regulated Militia by Brian Wood is a graphic novel that explores the lives of otherwise ordinary folk caught up in the extraordinary drama of the American Revolution. The main characters are fictional representations of real people. Historical figures pass through the narratives to add credence to the portraits of farmers, villagers, slaves, and natives. These stories span a lifetime, from the 1750s to 1800s, bringing the reader to Vermont, the Ohio frontier, the Carolinas, and the city of Boston.
Anyone who can tell you much about the American Revolution is likely to be a political activist. Radicals, whether conservative or progressive, identify with the struggle for rights and independence, even as they find fault with it. On the left, the fact that the leaders were well-to-do merchants and lawyers explains the incomplete recognition of rights, the eventual three-fifths compromise, the Alien and Sedition Acts, and other betrayals of democracy. From the far right, libertarian science fiction author L. Neil Smith, who penned a set of Lando Calrissian stories, has an alternate universe in which Alexander Hamilton escaped to Prussia following a failed federalist coup to make George Washington king of America, leaving the republic to the true republicans.
Here, in essays apart from the graphic novel, author Brian Wood explains that he is a socialist. His passions for the commoner feed the compelling histories. The contextual events are real: Vermont’s war against New York, Breed’s Hill and Bunker Hill, Ticonderoga, and the Cowpens. The men and women who fought and suffered and died or survived are inventions of the author. 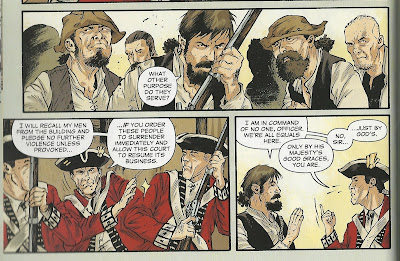 “Creating Seth Abbot was partly to give myself a break – a fictional character allows us to tell the story we all want to tell without being trapped by historical facts and having my hands tied narratively. I mean, the Green Mountain Boys were real, as was Ethan Allen and the “noble train of artillery,” but I wanted to be control of the personal narrative of the main character. Seth needed to be a sort of everyman. I also wanted to be able to filter some of my own stories of Vermont childhood, the history that excites me, and the locations I know personally into that narrative.” – “Interview: Brian Wood Returns to Rebels with the Next Generation,” by Jeffrey Renaud in CBR Exclusives here.

Within the ten stories is the continuing drama of Seth Abbott and his wife Mercy Abbott. He leaves her behind as he goes off to fight. The second time, he does not know that she is pregnant. He returns five years later. 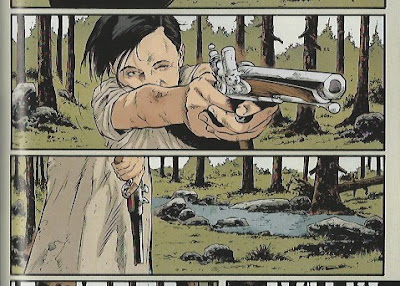 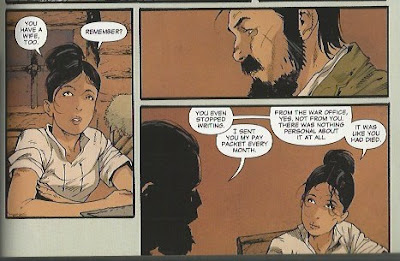 Among Seth Abbott’s adventures is his leading the team that brought the cannons from Fort Ticonderoga to Dorchester Heights. In that story, Brian Wood’s socialist preferences lead him astray. He draws Henry Knox as a soft sycophant, a bookseller with no military or other practical experience. A bookseller he was. He was also a street tough, a hoodlum who acquired the trappings of culture and sold them successfully until Boston was occupied. That remaining so, we slog through the mountain snow and valley mud with the farmers who hauled the cannons. For them, it was just more hard work. As one veteran told me about his view of Army life compared to his home life, “In other words, the Army was a lot like Tuesday.”


“We actually have Washington in the story in issue No. 4 along with Benedict Arnold,” he revealed. “Later in the year we’ll see Jane Mecom, Ben Franklin’s sister. I think it’s a good idea to drop these people in from time to time for context, but part of the point of ‘Rebels’ is to not re-tell the same stories everyone’s heard about these famous people, but to find the untold stories, the stories behind the folktales, and tell those instead. So you can expect famous cameos, but no more than that. Those public figures of 18th century America are often referred to as “patriots” — a term that has been misused, misappropriated and/or misunderstood in recent years,” he said. Exclusive preview: “‘Rebels’ writer Brian Wood explores the Revolutionary War” Hero Complex LA Times May 12, 2015 here.

Brian Wood invented Sarah Hull and her husband, Captain Samuel Hull. She is the “Molly Pitcher” whose service to her country included hauling water for the cannons and for the men who fired them, and then loading and firing those guns with them.  The real Sarah Hull was just as interesting.

“Sarah Hull, the wife of Major William Hull, was one of those women who followed their husbands to the camp, resolved to partake their dangers and privations. She was with the army at Saratoga, and joined the other American ladies in kind and soothing attentions to the fair captives after the surrender. She was the daughter of Judge Fuller, of Newton, Massachusetts, and was born about 1755. At the close of the war she returned home; and when her gallant husband was appointed general of the county militia, did the honors of his Marquée, and received guests of distinction with a grace, dignity, and affability that attracted general admiration.” “Sarah Hull” at AmericanRevolution.org here.

Posted by Michael E. Marotta at 6:42 AM No comments:

Austin Under the Stars

Last night, Laurel and I attended a star party hosted by the Austin Astronomical Society and St. Stephen's Episcopal School. Laurel recommended it on the advice of a friend of hers from a Saturday morning kaffee klatsch for computerists. I went because I knew that there would be about 20 telescopes there, more powerful than my own, operated by people who know the sky better. Even though she is not into astronomy, we both had a good time. Laurel integrated some “Star Trek science” into her general knowledge base.

As is my routine, before the event, I referenced the current night via the US Naval Observatory site http://aa.usno.navy.mil/data/docs/mrst.php. I made notes on what I wanted to see. Unfortunately, at the event, I was not able to view Markanian’s Chain (NGC 4406). However, as so often, serendipity delivered the M3 globular cluster, which I never saw before. Most of the telescopes were aligned to Jupiter and Venus. Venus was gibbous. But other than that, it does not grab the eye as does Jupiter, which most instruments were on for most of the night. In a Dobsonsian, it was bright enough to hurt.

Laurel’s friend has a neat little instrument. The housing is aluminum and titanium; the optics are “folded.” This kind has been used by NASA and the CIA. “You can parachute it into the field,” he said. “Mercury and Gemini astronauts used them to look at Russia.” Even though the small aperture (about 2-1/2 inches), precludes deep sky objects, Rob knows the sky. (I bought two of his astro-photographs at an artists walk last winter.) He had all four Galileans in view. And he took out his cellphone and accessed an app to identify them.
As with all knowledge aids since the first notched stick, phone apps and computer controls come with a cost. I saw one dad using an app to line up Leo for his daughter. But Leo is one of the three constellations of the Sumerians that actually looks like what it is: The Lion, the Scorpion, and the Bull. (The Giant is probably older, but not on the ecliptic.) On the other hand, it may just be my own perspective, but looking up the relative positions of the Galileans on your phone seemed no different than looking them up in an ephemeris. Without repetition, you can only keep so much in your head.

Knowing the sky makes all the difference. I was dismayed to discover that no one could answer my questions. People with Dobsonian “light buckets” knew even less than I do. According to Space dot Com, Ceres is in Leo right now, but that echoed as arcana when I asked. Then I met Frank Mikan, the science teacher at St. Stephen’s. As far as I can tell, he knows everything. I learned a lot that will help me when I am star hopping in my backyard.

Finally, one of the astronomy club members had his 10-inch reflector lined up on M-3, a globular cluster near the zenith. Actually Messier’s own very first object (May 3, 1764), it is catalogued as M-3. The elder Herschel resolved it 20 years later. It contains about 500,000 stars; is 8 billion years old (or 11.4 according to the latest research); lies 31,600 LY above the galactic plane and 38.8 kLY from the center and 33.9 kLY from us. It is coming toward us at 147.7 km/sec. According to the astronomer last night, globular clusters do not show relative orbital motions: the stars are just out there together. It will give me something to chase with my 5-inch reflector, though it will probably not resolve to a cluster.

The Austin Astronomy Club provided many hands-on learning opportunities with books laid out, and stickers and paper models from NASA. They also provided little glow-in-the-dark hand rockets. With a QR-activated app, you could “walk the solar system” and listen to transduced “sounds” of the sun and planets.

Laurel and I are working our way through Star Trek: The Next Generation. We are up to Season 6. In "Ship in a Bottle" the Enterprise is sent to witness the collision of two gas giants which is expected to create a proto-star. Laurel asked me what a "gas giant" is. I replied that it is like Jupiter and Saturn. That led to more questions, including the subject of hydrogen as as metal. Last night was Laurel's first view of Jupiter.