Today's "Great Debate" from Reuters online was a one-sided argument about the effect of "uber-rich tycoons" on our democracy.  The authors acknowledge that these individuals express a range of political opinions, from Republican, to liberal, and libertarian. (Put "richest Democrat … ic Party Donor …. in Congress…)"  into your search engine.)  However, their thesis is that no one person should have too much influence; and that claim is arguable.


What is "too much" of anything?  Obviously, if you had such power, you would engage it ethically.  You would support worthy causes and meritorious candidates.  Of course, from my point of view, your actions might be objectionable.

It is known that "facts do not matter." In other words, research has shown that people make up their minds first and then find the expert opinions and demonstrated facts that support their notions.  (See "Why Evidence is Not Enough" on this blog for a discussion and a link to the Yale Law School research archived on Mother Jones.)  The spectacular failures of the presidential bids of Steve Forbes and Mitt Romney are only paradigmatic of a myriad of others where all the slick advertising thrown at the voters did not bring victory.  On the other hand, the meteoric rise of Barack Obama shows that you can go far if you speak well in public for other people who prefer to remain private. But those Chicago communists are not rich. They just write well.  By the commutative law of arithmetic, if money is speech, then speech is money.

And wealth is power.  We Americans distrust power.  Our federal and state constitutions distribute and balance power.  That explains both the integrated elegance of the federal charter and why state constitutions are often clumsy amalgams.  We all know Lord Acton's maxim that power corrupts.  The full statement is a louder alarm:  "Power tends to corrupt, and absolute power corrupts absolutely. Great men are almost always bad men." Perhaps the root of the problem is how we measure greatness. Also, we apparently have no corollary about great women. 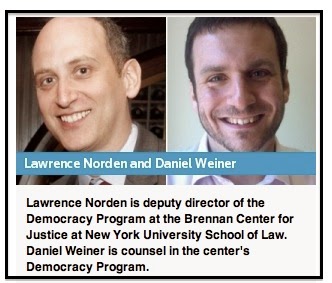 Good writers address the back of your mind.  Lawrence Norden and Daniel Weiner call these people "uber-rich." According to the Urban Dictionary (here) the germanism "uber" came into our language in the 1980s via California punk music as a direct play on Deutschland Über Alles.  While the Urban Dictionary allows that you can be uber-confused, the subliminal message from Weiner and Norden is that tycoons are unAmerican, perhaps even anti-American crypto-nazis.  Slandering the rich pays big dividends.

Among the targets chosen by Norden and Weiner was Sheldon Adelson whose many charities include the Republican Party. However…


Adelson was born into a poor family and grew up in the Dorchester neighborhood of Boston, Massachusetts, the son of Sarah (née Tonkin) and Arthur Adelson.  His family was of Ukrainian Jewish ancestry.  His father drove a taxi, and his mother ran a knitting shop.
"An entrepreneur is born with the mentality to take risks, though there are several important characteristics: courage, faith in yourself, and above all, even when you fail, to learn from failure and get up and try again."  - Sheldon Adelson, 2013
He started his business career at the age of 12, when he borrowed two hundred dollars from his uncle and purchased a license to sell newspapers in Boston. At the age of 16, he had started a candy-vending-machine business. He attended trade school to become a court reporter and subsequently joined the army. Adelson attended City College of New York, but soon decided to drop out.
He established a business selling toiletry kits after being discharged from the army then started another business named De-Ice-It, which sold a chemical spray to help clear frozen windshields. In the 1960s, he started a charter tours business. He had soon become a millionaire, although by his 30s he had built and lost a fortune twice. Over the course of his business career, Adelson has created over 50 of his own businesses.  -- Wikipedia here.

In The Invention of Enterprise: Entrepreneurship from Ancient Mesopotamia to Modern Times, edited by David S. Landes, Joel Mokyr & William J. Baumol (Princeton University Press, 2011), the authors admit that in every society, some people rise in status, but what matters is the moral standards of the society.

In America, from Benjamin Franklin's Way to Wealth to Napoleon Hill's Think and Grow Rich, the "bourgeois virtues" elucidated by Deirdre McCloskey were the implicit norms.  In ancient Rome, conquest brought honors. You cannot blame Marc Antony for looting the town of Pergamum and giving its library to Cleopatra. We might prefer that he had used his organizational skills in some great profit-making ventures, but he was only a man of his time. It is also true that in Republican Rome, "ambition" (literally, ambling around glad-handing citizens for votes) was a crime.  Today, we reward it.

My libertarian and Objectivist comrades wring their hands over Elon Musk, Jeff Bezos, Mark Zuckerberg and other entrepreneurs who achieve great success in the marketplace and then go to bed with governments.  Rather than squelching individual efficacy, we should just limit the government's powers.  That is easier said than done.  The strictest constitution cannot prevent unlimited government, if that is what very many people want.  As Aristotle said, tradition is stronger than law.