Assign a Number to it, said Lord Kelvin

“When you can measure what you are speaking about, and express it in numbers, you know something about it; but when you cannot measure it, when you cannot express it in numbers, your knowledge is of a meagre and  unsatisfactory kind:  it may be the beginning of knowledge, but you have scarcely in your thoughts, advanced to the stage of science, whatever the matter may be.” – Sir William Thomson, FRS, FRAS, etc., “Electrical Units of Measurement,” May 3, 1883 in Popular Lectures and Addresses, MacMillan, London, 1893.

Oddly enough, for all of the numbers in the hobby of astronomy, we observers report very few of our own. We have the Bortle scale of relative darkness. And of course, stellar magnitudes are commonly referred to, mostly in the context of what is the dimmest you can see tonight? We know that for eta Cassiopeiae, the main star is +3.44 (apparent) and +3.45 absolute and that the companion is +7.51 because that is what is in the references, the same as their classes: G0 for eta Cass A and K7 for eta Cass B. But we do not measure them and report those facts ourselves. Someone might take a picture of them. No one subjects them to a spectroscopic investigation. I, too, am remiss: I only have noted visual impressions and subjective evaluations.

I do not remember where I read of epsilon Lyrae as a viewing target, but I have it in my notebook between 12 and 14 November as a possible goal along with eta Cassiopiae and gamma Delphinus. (I identified Delphinus on 01 November, above Jupiter.) I found eta Cass, but have not pursued gamma Delph. Capturing all four stars associated with epsilon Lyr took some work and encouragement from peers. 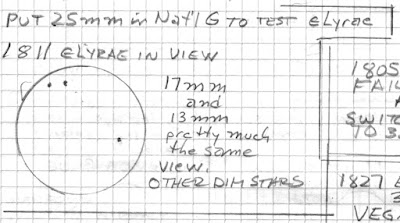 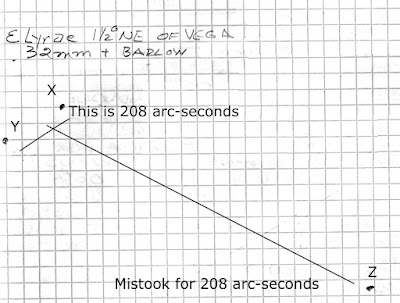 I posted my sketches to The Sky Searchers under Observing Reports. (I also figured out a way to make drawings more-or-less to scale by keeping both eyes open and holding a ruler at arm’s length in the image.) 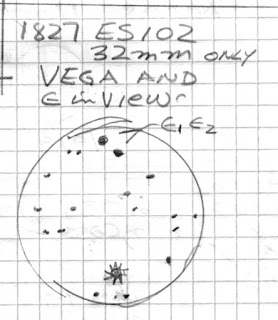 Username Bigzmey replied that with my ES-102 and a 6 mm ocular with 2x Barlow, I ought to be able to split the two stars e1 and e2 into four. I went back and did more reading and found my mistake. 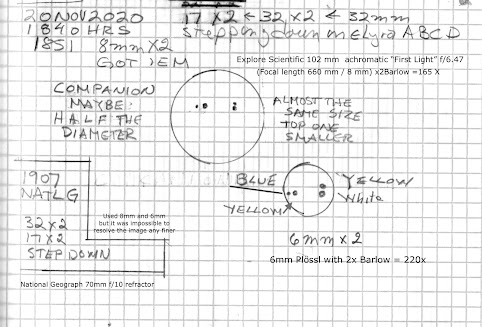 I posted my sketches of 20 November 1851 hours along with my thanks.

[A note on the scientific illiteracy of our era: On this blog you can find excoriations of Neil deGrasse Tyson's Spacetime Travesty and errors in the Sky & Telescope desk calendar. In this article, you will have caught the fact that the Greek letters are written out. I write my drafts in Word. Characters created with the MS-Word Symbol font do not always import. It depends on the versions of this and that. Google Blog has Lots of New Cool Fonts, (including Cherry Cream Soda) none of them supporting a technical set. Even the s0-called Cambria Math is sadly deficient.

A-hat and O-hat are OK for unit vectors, or would be if they were lowercase. Such do not exist.

The right-hand alt opt key give the line shown above.

... because mathematicians and other technical workers so often call on the archaic copyright © and registering ® their trademarks to protect their incomes in Japanese ¥ yen when citing the words of James Madison on the advantages of a fœderal constitution.]

Space is the Place: Come to the High Frontier

On October 13, 2020, at 23:00 UTC (6 PM CDT), Earth passed directly between the Sun and Mars. And given the eccentricity in the two orbits, this was a close opposition. Even into November, the viewing has been good. My new telescope arrived on October 24, but I did go out earlier with my National Geographic 70 mm and view. “You can observe a lot just by watching,” said Yogi Berra.

Technically, Venus is the planet closest to Earth most of the time, but at opposition, especially when Venus is at inferior conjunction (on the other side of the Sun), Mars is closer still.  That fact has been with me since I first saw Invaders from Mars (1953) on TV about 1960 or 61.

Unlike Venus which is covered in clouds, Mars has long enticed us with its changing surface features. I even have a Warner Brothers Marvin the Martian t-shirt and another with the Martian fleet from Mars Attacks (1996). My first narrative view of a Martian was in Assignment in Space by Blake Savage (a re-issue of Rip Foster Rides the Grey Planet, 1953).

Rescuing Aristotle and the Church

Posted by Michael E. Marotta at 6:47 AM No comments:

We knew that Désirée had feline leukemia when we adopted her four years ago. After she passed away, we waited a few months to take in a family member. Sunny is also a rescue. PTSD is the easiest diagnosis.

Laurel got her from a rescue lady with a clouder of her own. Sunny's kittens had been taken away from her and she spent her time with her nose in the corner of a closet. We got her here and put her in a closet. It took about two weeks for her to settle in under the bed. She was good about the litter box and always cleaned her food dish so like you just put it back in the cupboard. But she was tragically aloof. She still does not like to be petted. But now she does come out to play with us, chasing balls.

She comes into the living room and watches TV fairly intently. We moved her food from the bathroom to the bedroom and now into the living room. She still does not like to spend too much time in the kitchen, but does explore. She found the back door and sniffed at it and her back went up. She likes attention from a distance. And she like to play ball. Not only does she chase them, of course, but she bats them back and has a backhand move. Last night, she slept on the bed and did not spring off and go under when one of us shifted. Recovery is a process.

Plenty of Time When We Get Home

Posted by Michael E. Marotta at 5:52 PM No comments:

My wife and daughter bought me a telescope for my birthday in 2014. Today, I reviewed by notebook. It was disappointing. Overall, I made very little progress in observation, even though encouraging entries do exist. I first saw Mars on 17 June 2016. I sketched it two years later on 17 August. I spotted the Andromeda Galaxy 1 December that year. I attended some good star parties and a lecture by Dr. Steven Weinberg. This past June, I became an assistant editor with the History of Astronomy Division of the American Astronomical Society. In six years (2162 days), I have 195 pages with ten colored flags for wins. Flags aside, the latest entries since April are more informative. 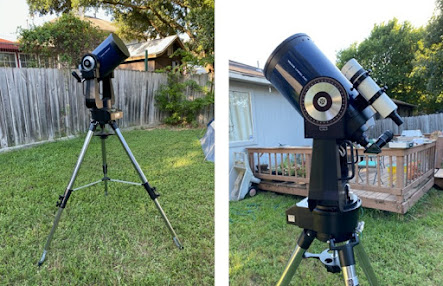 I may unpack the Celestron EQ-130 (5-inch reflector) and use it again, but it is not my favorite.
In many ways the abused National Geographic 70mm (2-3/4 inch) refractor that I bought served me better. It has a longer focal length and a higher f/stop ratio. And it is a simple altitude-azimuth XY mount.
My time in the Austin Astronomical Society has been a ledger of gains and losses. Laurel gave us a family membership with my telescope in November 2014. When the club had the Canyon of the Eagles dark sky site and observatory, I completed a certificate in telescope operations with their classic 12.5-inch Newtonian and 16-inch Cassegrain instruments on March 15, 2015.
Five months later to date, at a COE members-only star party, when he was serving as the Outreach director, Jim Spigelmire spent an hour with me getting me oriented to more stars than I had seen in my life at one time and place.
When she was serving as the newsletter editor, Joyce Lynch assigned me to interview the club’s stalwarts for a series of articles in 2016. I learned a lot. I interviewed Terry Philips (now serving as the president), on May 27; and thanks to him, on June 17 I first viewed Mars with my EQ 130. I interviewed astrophotographer Mike Shaffer and learned that a telescope is composite of different assemblies: an objective lens system in an optic tube, oculars (“eyepieces”), a mount, and a tripod. When you buy them all as a package, you buy someone else’s trade-offs in price and performance. As a mechanical engineer, he preferred to write his own requisitions.
After one club meeting on the University of Texas campus, we held a star party on a walkway over MLK Boulevard and one of my colleagues lined up Albireo for me in his telescope.
The downsides reflect the fact that we prefer to be alone in the dark focused on objects very far away. Everyone is on the autism spectrum, often with obsessions, compulsions, and other disorders. One of the affiliated social clubs is “Astronomy on Tap” and I served on a committee with a mean drunk.
After a star party, I put the telescope back in its shipping cartons for five months, devoted more attention to my military service, and let my membership lapse. I re-enrolled in 2019 and volunteered as a member-at-large on the executive committee. This past June I ran unopposed for vice president.
For those of us who do not work and play well with others, online discussion boards can substitute for warm body interactions. I subscribe to Cloudy Nights and The Sky Searchers, writing and reading more with the latter.
I also subscribed to Sky & Telescope and Astronomy. I leaf through them, but they don't speak to me. Purchased from their bankrupt holding company Sky & Tel is now published by the American Astronomical Society. Astronomy maintains a database of past articles that was not as  helpful for research as I had hoped. I bought their CDs of past issues, but unfortunately, the disks are no longer compatible with Mac OSX. So I sent them back and told them to keep the $129 because it was not as important to me as knowing never to buy from them again. Then, Astronomy caught me with an automatic renewal this year, so that was fifty bucks out the door, but I was able to cancel it for the next time around.

I like to go out at night, observe the universe, and satisfy myself that it is pretty much as described. The heavens are orderly and predictable, made of the same stuff as I am, yet made astonishingly different from mundane, secular experience. The stars are pretty at any magnification. Viewing them bigger and brighter only reveals their surfaces. As pleasurable as observing is, my greater passions are for the history, the theory, and the history of the theory. 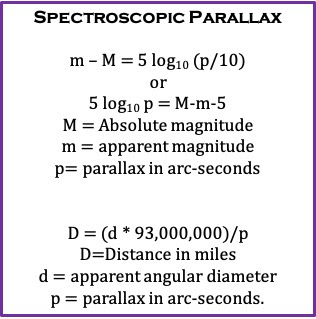 Ultimately, for myself, astronomy is about the mathematics and science and the people who discovered them by creating methods and instruments. The invention and improvement of the telescope, the discovery of the spectrum, the application of radio to astronomy, and then launching those telescopes and radios into outer space are all very grand. That it can be expressed as a small set of symbols that I can understand is at once humbling and ennobling.

Austin Under the Stars

Physics for Astronomers: the Works of Steven Weinberg

Posted by Michael E. Marotta at 6:03 PM No comments: