Every endeavor has its great names. This is a book that "everyone" in astronomy knows. Despite having been published in 1979, this set never loses its importance. In astronomy far more facts are added than are subtracted (poor Pluto). Burnham's Celestial Handbook: An Observer's Guide to the Universe Beyond the Solar System by Robert Burnham, Jr., New York: Dover Publications (1966, 1978) has not been updated because it did not need to be.

The book began as a 3-ring binder that Robert Burnham made for himself while working at the Lowell Observatory outside Flagstaff, Arizona. His interest was in "deep sky objects": stars, clusters, nebulae, galaxies. He assembled his data from the standard references in the observatory library, as well as from other sources. He organized it for himself alphabetically by constellation. Volume 1 runs "Andromeda Through Cetus"; Volume 2 is "Chameleon Through Orion"; Volume 3 is "Pavo Through Vulpecula". 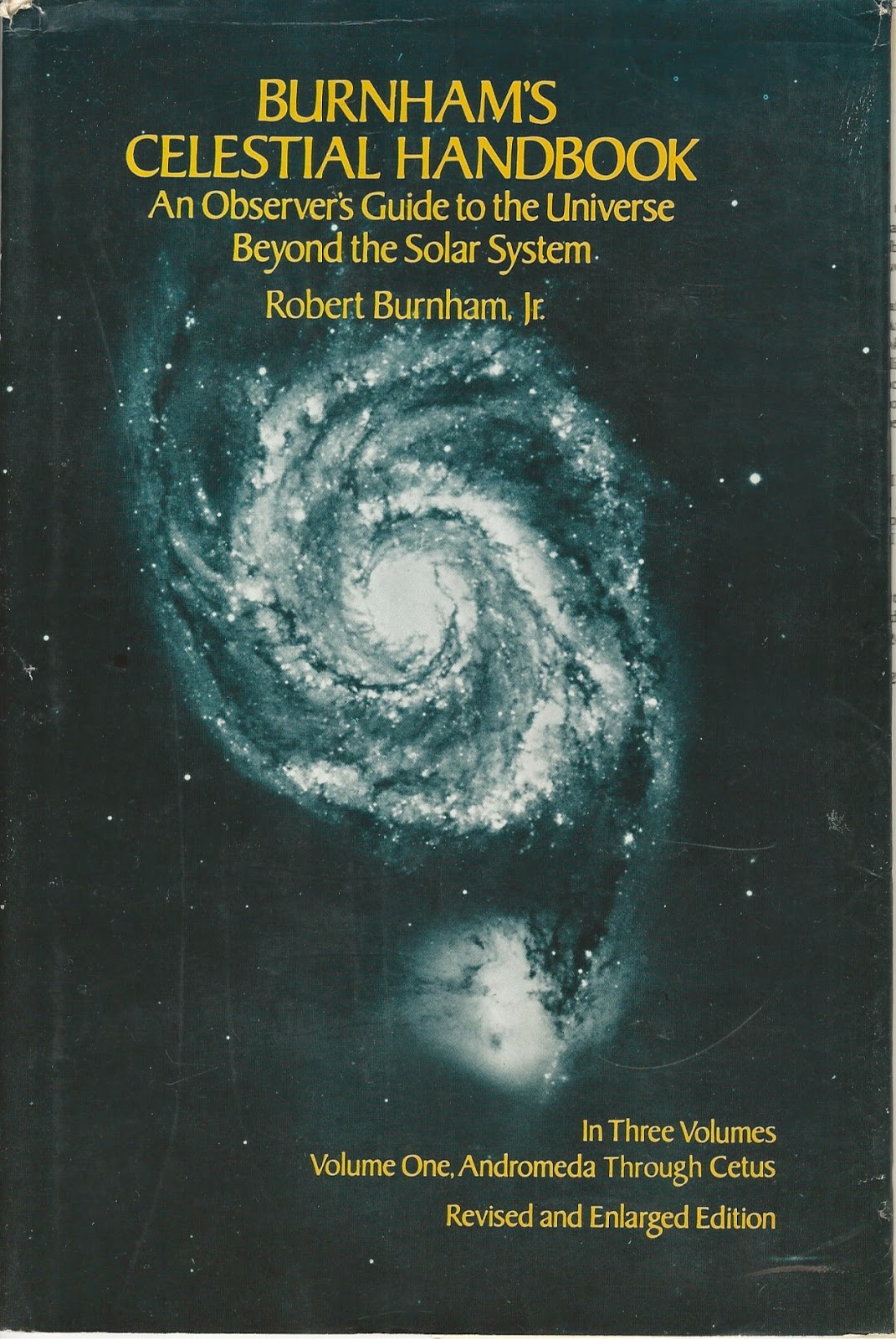 Hercules is a rich area of the sky. The descriptions run 46 pages, including double stars, multiple stars, variable stars, and then clusters, nebulae, and galaxies. The chapter closes with a lengthy descriptive summary of the facts about each of the stars in the constellation. Moreover, Burnham includes both the (brief) mythological story and the (longer) historical aside with pictures of ancient Greek coins depicting the hero. Again, all of this was intended for himself. It now serves us all.

Like any good discovery, the three-volume set offers more. It begins with what is essentially a 90-page class in Astronomy 101, covering the general layout of the universe and our place in it, as well as a basic table of objects. Burnham of course includes a dense array of facts, though much of the presentation delivers adjectives about the astounding, terrifying, and strange nature of the unearthly universe.

Perhaps the only paradigmatic addition to our general store of knowledge has been the discovery of more stars with planets. In Burnham's day only Barnard's Star offered that potential, an investigation beyond most amateurs, even today. (Barnard's Star is only 3.8 light years away but a red dwarf of +9 visible magnitude; you can see it with a telescope, but you will not see the planets, which arguably are not there after all…)

[In 2014, I wrote this in three installments on the International Astronomy Forum (now closed). There, Pikaia commented: “I have all three volumes which I have owned for a long time, and I enjoyed reading them. Unfortunately he had an unhappy life.  Robert Burnham, Jr. - Wikipedia, the free encyclopedia.

In 2019, I posted this with some edits to the SkySearchers.com discussion board (inheritor of the IAF site). There, Piet Leroux replied with a link to this 11,000 word biography of Robert Burnham from The Phoenix New Times by Tony Ortega: https://tonyortega.org/sky-writer-the-cosmic-life-of-celestial-handbook-author-robert-burnham-jr/ Ortega's blog is pretty much focused on exposing Scientology, but this article has nothing to do with that.]

Burnham's tables give the Right Ascension and Declination for the interesting objects (binaries and multiples; variables; clusters, nebulae, and galaxies). So, you can set your 'scope by him. This is more than rhapsody, though he does speak poetically and dramatically. Also, as mentioned, he drew upon the Lowell Observatory library and other sources. Volume I gives the key to the tables. Sigma Σ is for F. G. W. Struve the Struve Double Star Catalog. Arg is for F. Argelander.  In all, Burnham references 21 catalogs, including those compiled by Kuiper and John Herschel. Δ (Delta) is for J. Dunlop; and lowercase beta β is for S. W. Burnham (the other Burnham).

The "Terms, Symbols, and Abbreviations" to explain the Tables runs four pages.

He catalogs the Nebulae by NGC (New General Catalog) but also relies on the Messier list. Burnham developed an interesting and useful symbology for Galactic Star Cluster (open dotted circle), globular cluster (circle with cross, like the old astrological sign for Earth), and so on.

In addition, he notes which clusters are loose and irregular ( C ), loose clusters (D), moderately concentrated (E), fairly well compressed (F) and rich and compact (G). All of that and more runs another two pages in Volume I.

Burnham provides several indexes in Volume 3. First is a numerical list of Messier Objects 1 through 104, giving the NGC number, common name or constellation, and the page number. (The three volumes are paginated sequentially.)

Next are two lists, the 35 Brightest Stars and the 25 Nearest Stars, though six of the latter are not mentioned in the books. The index of Brightest Stars gives their common names, Bayer Designation - Sirius is α Canis Majoris; Kaus Australis is ε Sagittari - Magnitude, Spectral class, and page number. The table of nearest stars lists them by their most usual designation - Proxima Centauri, Wolf 359, etc. It also gives their Constellation, Distance, Magnitude, Proper Motion (in seconds of arc per thousand years, Mu") Position Angle (PA), location (RA and Dec) and page number in the volumes.

Next is a Bibliography separated into General Stellar Data, Double Stars, Variable Stars, Star Clusters, Nebulae, and Galaxies. The Bibliography closes with Observer's Handbooks, and General History and Astronomical Lore.

The volumes are in alphabetical order by constellation, Andromeda through Vulpecula. Nonetheless, they are indexed at the back, giving their page numbers, as well well the Norton's Atlas Chart number, and the Skalnate-Pleso Atlas Chart number. Next is a list with page numbers of about 170 stars and other objects by their common names: Achernar, …, Eagle Nebula, …, North Star, … Sword of Orion, …, X-Ray Sources, … (The list of White Dwarf stars is on page 417.)

The work closes with an Index of General Topics, and an Index to Tables of Data.

In short, what you have in these three volumes is the twenty year diary (1958 forward) and professional research notebook of a working astronomer who was passionate about Deep Sky Objects.

ALSO ON NECESSARY FACTS
Seeing in the Dark: Your Front Row Seat to the Universe
Astronomical Symbols on Ancient and Medieval Coins
Science in the Middle Ages
Is Physics a Science?