December 24, 2014.  Many doubts remain about who hacked Sony and why.  It may be that an insider with a grudge was located and turned by North Korea.  Perhaps some other explanation will satisfy whatever facts are established.

Moreover, the President did not stand tall and proud for freedom of speech back then.


The Obama administration asked YouTube to review whether to continue hosting the video at all under the company's policies. YouTube said the video fell within its guidelines as the video is against Islam, but not against Muslim people, and thus not considered "hate speech".[73] Ben Wizner of the American Civil Liberties Union said of this, "It does make us nervous when the government throws its weight behind any requests for censorship."[82]


"Graham Cluley, former senior technology consultant at Sophos and author of the security blog grahamcluley.com:  "It’s a bit like asking if I think Belgium was involved with the Sony hack. Why would you think North Korea is involved? The idea appears to only have popped up in a story in Re/Code a few days after the big, public reveal of the attack. The hackers hadn’t mentioned it. Sony executives received an e-mail a few days before the attack that said 'you just need to pay us.' When the message with all the skulls came up, there was no mention of the movie. If stopping 'The Interview' was the point of the attack, why wouldn’t they mention it? I just don’t get it. When have we ever heard of state sponsored cyberterrorism putting skulls on people’s screens?" "Did North Korea Really Hack Sony? Cybersecurity Pros at Odds" (On Yahoo News here but originally from the Christian Science Monitor.)

"The film was available for rental on Google Inc's Youtube site as of early Wednesday afternoon. Microsoft Corp and Sony itself are also showing the comedy, the studio said, a day after agreeing to release it at some 200 independent theaters." -- Reuters here for 24-Dec-2014

And lest we forget, Iraq did not seek to buy uranium (http://en.wikipedia.org/wiki/Niger_uranium_forgeries)
In that case, CIA analyst Valerie Plame was exposed by journalist and CNN pundit Robert Novak, perhaps in retaliation because her husband Joseph C. Wilson refused to endorse the Administration's claims on the subject.  (http://en.wikipedia.org/wiki/Plame_affair)

… and who really shot President John F. Kennedy?
Below is the previous version of this blog article.

We do not let our own government prevent the expression of ideas.  To surrender to North Korea over The Interview is to give up everything important about America.  The general lack of outrage in this country is a sad commentary on how far we have slid since September 11, 2001.

In 1735, New York newspaper publisher John Peter Zenger criticized colonial governor William Cosby.  Cosby sought an indictment for libel, but the grand jury refused to indict.  So, the governor turned the attorney general who did bring charges.  The petit jury took ten minutes to return a verdict of not guilty. 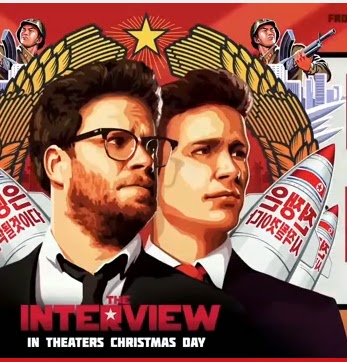 The Interview is a comedy. Even if it were serious, it would make no difference in the issues.   The world stood behind Salman Rushdie  in 1988 when the Ayatollah Ruholla Khomeini, as Supreme Leader of Iran, issued a fatwa for his execution.  The book, Satanic Verses, was banned in countries with significant Muslim populations.  If The Interview is banned in North Korea, not much can be done.  But the world at large – and the American political press in general – seems unconcerned about the consequences of letting North Korea be the lodestar of our moral compass.
My Fellow Americans was a 1996 comedy – with two deaths – in which the vice president of the United Sates attempts to kill two ex-presidents.   Wag the Dog was a 1997 dark comedy where a Hollywood producer creates a phony war to help the  president deflect the nation’s attention from his sexual indiscretion with an underage girl visiting the White House.  Truth and fiction can be difficult to differentiate; but if it is perfectly acceptable to make a comedy about American presidents – and it is – how can the First Secretary of the Workers Party of Korea be above ridicule?

Here is one gauge of how unclear the general thinking is on this.  On December 17, CNN afternoon anchor Brook Baldwin interviewed Kurt Loder from Reason magazine and CNN’s own media critic, Brian Stelter.  Loder was clear and consistent, of course.  Baldwin and Stelter sort of thought that maybe this could be kind of inappropriate to make a movie about killing “a world leader.”  Reason’s Kurt Loder pointed out that whether the story’s plot is appropriate is totally irrelevant. 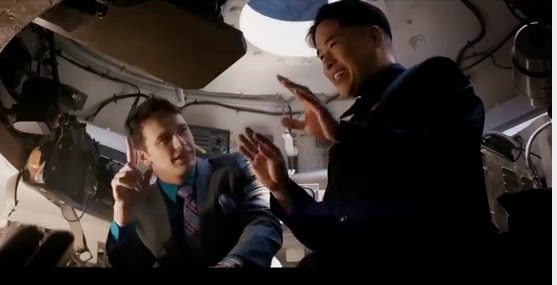 Six months ago, North Korea called the movie “an act of war" (CBC here, for example). The press release supposedly came from an unnamed source within the government of North Korea, cited in an official communiqué first by Agence France-Presse.  That was quoted by news channels in Canada and Australia, and by Yahoo news and Huffington Post, on June 25, 2014.  Not much was said in mainstream media. Not much (if anything) came from the conservative or liberal political media (except HuffPo).  As Sony Pictures, the major movie theater chains, and the American people and our government all compromised the basic principles of our political constitution, then North Korea won this war,

Congress should show this film – and link arms to sing “God Bless America” after the credits roll.

[Added December 20, 2014:  Yesterday, President Obama delivered a cogent message.  Among his many points were that we should not censor ourselves "for fear of offending the sensibilities of somebody whose sensibilities probably need to be offended." From the 2:27 mark.]