This blog earned its 100,000th page view on December 10.  The Google metrics are somewhat questionable. I read through all of the numbers provided individually and found many more that were popular, but not listed.  Also, it is hard to understand why so many hits come from France, the Ukraine, Russia, China, and Malaysia.  Perhaps hackers automatically probe all blogs looking for weaknesses. 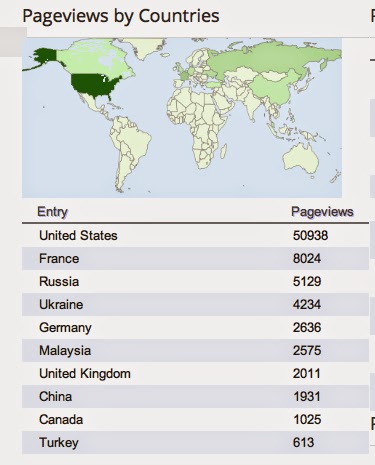 Many of my Objectivist comrades visit, as I post out-takes, or cross-link articles from here to Rebirth of Reason, Objectivist Living, and the very popular Galt's Gulch Online.  Unfortunately, from what I can tell by the metrics, they seldom have read more than the target link, even though most of the articles here close with "Also on Necessary Facts" (sometimes "Previously on Necessary Facts").  I also get some traffic from Michael "wintercow" Rizzo, professor of economics at the University of Rochester (New York), who writes the Unbroken Window blog. A few more viewers come in via Organizations & Markets.

Although "Alongside Night" jumped to first place this year, historically, the top post had been "What (if anything) did Dorothy Learn?" The conclusion to the famous 1939 movie version of The Wizard of Oz still leaves people around the world wanting to know.

The other subject of perhaps truly wider appeal that did not make even the top 30 this year was "Firefly: Fact and Value Aboard Serenity."  A libertarian friend recommended the series on the Objectivist Living discussion board.  I found it favorably reviewed on the Atlas Society website.  I got the disks from the library; and we both enjoyed the series. My ex enlightened me about Joss Whedon. From there, I found more works, such as his Astronishing X-Men issues; and I understood why the "Serenity" page won so many looks.  (We just watched Season One of Buffy the Vampire Slayer last month.)

I created the Score by dividing the Days into the Views. I figured that about One per Day was good.

Personally, I have my own favorites.
Over all, topics on this blog ride a wide range because it is my alternative to paid work.  As a technical writer, I enjoy delivering information about products and services to the clients and customers of those who hire me.  Here, I write for myself.  Many of the posts fall under a few rubrics.

Some necessarily cross the demarcations. John Jay Ford and William Sheldon perpetrated their crimes within the field of numismatics. Similarly, misconduct in laboratory procedure is one of the causes of false convictions. So, I have a different site, entirely, CSI:Flint (2011) which I created for a "Super Science Friday" session for middle schoolers visiting the University of Michigan.