Birth of a Theorem by Cédric Villani

I gave up after 30 pages. The difficult mathematics was the largest but not the only barrier.
The story follows the “Save the Cat” format. As the author says in the Preface:

“This book tells the story of a mathematical journey, a quest, from the moment when the decision is made to venture forth into the unknown until the moment when the article announcing a new result—a new theorem—is accepted for publication in an international journal.

“Far from moving swiftly between these two points, in a straight line, the mathematician moves forward haltingly, along a long and winding road. He meets with obstacles, suffers setbacks, sometimes loses his way. As we all do from time to time.”

But if you do not know what a “cat” is (or the nuance in "save"), then saving him lacks context.

For his work, Villani was recognized with a Fermat Prize, the Henri Poincaré Prize, and, ultimately, on August 19, 2010, a Fields Medal. At the ceremony he heard the announcer: “A Fields Medal is awarded to Cédric Villani for his proofs of nonlinear Landau damping and convergence to equilibrium for the Boltzmann equation.” (Page 231) One thing I will give Villani is that he was clearly focused on winning the Fields medal (pages 61-62).

I once read that publishers feel that every equation costs 100,000 readers. If that is so, then this book was read by one person. Pages 144-155 consist entirely of a section of a paper from Acta Mathematica.

Those are not just two egregious examples. The whole book is like that.

It is not just the equations. The vocabulary is highly technical. "Yes, a Moser-style scheme. The key is that the Boltzmann operator... true, the operator is bilinear, it's not local, but even so, it's basically in divergence form--that's what makes the Moser scheme work. You make a non-linear function change, you raise the power...You need a little more than temperature, of course, there's a matrix of moments of order 2 that have to be controlled. But the positivity is the main thing." [ellipses in the original]

You know all the words. What you do not know is their mathematical meaning. The "Boltzmann operator" is the collision operator. I had to look that up and read three links to get the meaning. But I already knew that Boltzmann's work was a statement of thermodynamics.  "Divergence" has a common meaning close the mathematical use of the Nabla operator. The Nabla is the upside down Delta. It is used to express changes in vectors. (Look for Div-Grad-Curl).  "... a matrix of moments..." is not a grid of small times. In common engineering, a moment measures force times distance to express rotation. A moment is like a lever arm, why on a teeter-totter or see-saw, 40-lb child six feet from the center can lift a 160-lb man only one foot from the fulcum. In statistics, the first, second, third, and fourth moments express mean, variance, skewness, and kurtosis. So, now, it is somewhat clearer why the matrix of second moments is related to the divergence. But not knowing the language, I have stop to look up every word.

By comparison, like any American boy, I know “something” about cars and have worked on my own over the years. I was employed by Kawasaki. I have been on projects at GM, Ford, and Honda. So, when I read that in 1998 Honda developed an experimental Formula One car, the RA099 3-liter V-10, I can say “That’s nice.” The stuff that excites motorheads is beyond me. And, so, too, here, were the plot turns lost in the dense shoptalk among specialists.

The detours were also problematic. The author loves Manga. It is his escape from mathematics. I know the genre a little bit. Long ago, I even read some in Japanese. But rather than an inclusion, it was an exclusion. An editor warned me about that: when you write for two different audiences, you do not get the union of the sets, you get the intersection. Here, the audience is the set of mathematicians whose published works bring them to the attention of prize judges.
Previously on Necessary Facts

Posted by Michael E. Marotta at 12:52 No comments:

A picture is worth a thousand words, so I will not say much. I just thought that it is interesting that when something is true, it can be demonstrated by many methods. 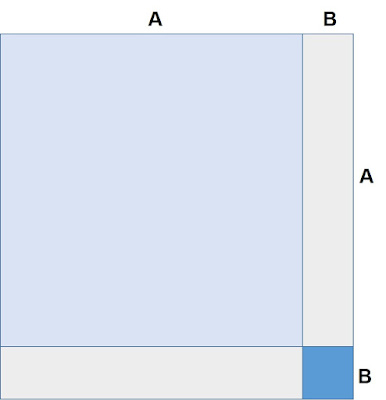 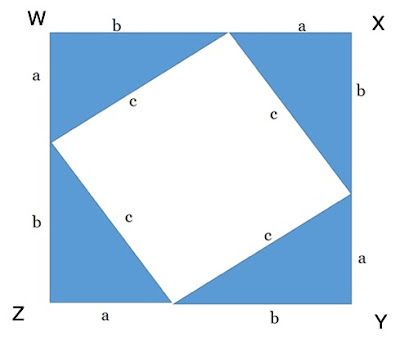 From Texas to the Moon with John Leonard Riddell
Nerd Nation: 4.5
Integrating Criminologies
Why a Level Playing Field?

Number Theory as an Adventure

Number theory can be taught to children. It all begins with integers. First year algebra (at least) is required to prove these conjectures. But the facts can be presented and tested by a nine-year old who is comfortable with long division. Even a first grader can understand, appreciate, and test many of them.

Multiplying odds and evens always yields: odd X odd = odd; even X even = even; odd X even = even. A child learning arithmetic can test examples until she is tired and at least get a lot of practice. It is not a proof, of course, but it can remain a challenge for a child who wants to learn algebra. The algebra is easy to show.
A child who is comfortable with first year algebra can get lost in the Pythagorean theorem and many of the truths that can be derived from it. Among the Pythagorean Triples are some such as 3-4-5 and 5-12-13 and 15-112-113 for which the hypotenuse is one unit longer than the longer of the two other sides. And there is an easy formula for generating them. It can be coded up as a computer program or a spreadsheet.

This second edition was released soon after Andrew Wiles announced his proof of Fermat’s Last Theorem. Richard Friedberg cautions that the proof was not yet accepted. It was not. A second proof was. Friedberg discusses Fermat’s Last Theorem as an extension of other explorations, principally the Pythagorean Theorem. That venerable truth is the crux of this work though Friedberg brings the reader into many other fields: infinite descent, perfect numbers, modulo arithmetic, and prime numbers. Along the way, he cites the discoveries made by Fermat, Euler, Lagrange, Gauss, and, of course, Diophantus, among others.

G. H. Hardy’s “Apology”
The Man Who Loved Only Numbers
Elisha Loomis and the Pythagorean Theorem
Imaginary Numbers are Real; Pegasus is Not
Two Books on Fermat's Last Theorem

Posted by Michael E. Marotta at 04:19 No comments: