The fact that over 300 proofs of the Pythagorean Theorem are known and an infinite number are possible is in and of the nature of the universe.  When something is true, many other truths support it; and a truth leads to many others.  Moreover, no truth can be supported by a fallacy; and a truth cannot lead to a fallacy.

The Pythagorean Proposition: Its Proofs Analyzed and Classified and Bibliography of Sources for Four Kinds of Proofs by Elisha Scott Loomis, Ph. D., LL.B., Masters and Wardens Association of the 22nd Masonic District of the Most Worshipful Grand Lodge of Free and Accepted Masons of Ohio, Cleveland, Ohio, 1927.  National Council of Teachers of Mathematics, Washington, D.C. 20036, 1940, 1968; 2nd printing 1972.

Algebraic proofs show that for two numbers, each of them multiples of other numbers by themselves (squared), there exists a third number, also the product of some number by itself (a square) that is the sum of those.  That is, for some integers A and B there is a C such that C*C equals A*A + B*B.  Geometric proofs are achieved by constructions, folding, cutting, and superimpositions. Dynamic proofs come from the mathematics of engineering mechanics, from vector arithmetic, in which magnitude and direction together define a force.

For quaternions, I can only quote Wikipedia: “quaternions are a number system that extends the complex numbers. They were first described by Irish mathematician William Rowan Hamilton in 1843 and applied to mechanics in three-dimensional space. A feature of quaternions is that multiplication of two quaternions is noncommutative."  In other words A * B ≠B * A.  The only explanation I know – perhaps not actually from quaternions – is that there are ways to flip a book (transformation with rotation) so that when you reverse the steps, the book is in a different orientation than when you started.

But I could follow the concepts supporting the algebraic and geometric proofs; and they are the foundation for the vector arithmetic.

The simplest algebraic proofs are attributed to Pythagoras and Euclid, but I would like to find them in the original because, in fact, those ancient savants did not know algebra. Nonetheless, citing Loomis, those proofs were explored and generalized by Artemas Martin (1891) and Leonard E. Dickson (1894).

Start with any odd number. Square it and subtract 1; then divide by 2; this is the second number. For the third, take the original, add 1 to it, and square the sum. That third number equals the sum of the squares of the other two.

The algebraic proof is difficult to lay out with a word processor but is easy enough with paper and pencil.


The simplest geometric proof is achieved by starting with a right triangle. Drop a perpendicular from the right angle. The three triangles are similar. The ratios and proportions of their respective sides can be stated algebraically, and then be manipulated to show that the square of the original hypotenuse is equal to the sum of the squares of the other two sides. 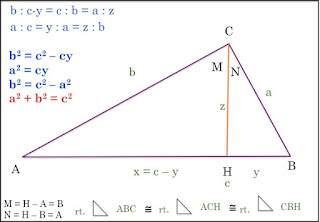 The other 368 proofs are left for the reader to enjoy.

Elisha Scott Loomis held a doctorate in mathematics from Wooster College in Ohio, earned a law degree and was admitted to the Ohio bar, worked as the town engineer in Beria, Ohio, and, after some other appointments and assignments became the chairman of the mathematics department at West High School in Cleveland, Ohio.

The first edition of this book includes a roster of the 22nd Masonic District of Ohio with their officers, including the Past Grand Masters, and the Masters and Wardens Association, about 150 names in all. I recognized many of the neighborhoods:  Brooklyn, Denison, Collingwood, Windemere, Lakewood, Euclid, Sheffield. Other lodges had honorific names: Laurel, Pythagoras, Warren G. Harding, North Star, Halcyon.

The second edition had three printings, 1940, 1968, and 1972 by the National Council of Teachers of Mathematics. Their office is listed in Washington DC, but the books were printed in Ann Arbor. The dedications to the FAM lodges were removed in the reprinting.

You can find a biography of Elisha Scott Loomis in Wikipedia.  The same information can be found in the front matter of the books.  Other biographies have been archived online. 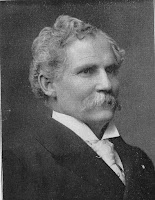 “While he was living in Berea, Loomis began to study civil engineering and became the village engineer. He also served a three-year term as president of the Berea board of education. He continued to study while he taught, and this led to an A. M. degree from Wooster (Ohio) University in 1886 and a Ph.D. in metaphysics and social science from that same institution in 1888. The subject of his doctoral thesis was "Theism the Result of Completed Investigation."

In 1895 Professor Loomis left Baldwin University to become head of the mathematics department at Cleveland West High School, where he remained until his retirement in 1923. In 1900 he earned the LL.B. degree from the Cleveland Law School and was admitted to the Ohio state bar. He served a 3-year term as president of the High School Teachers¼ Mathematics Club of Cleveland, and he was active in the Masonic lodge.” – Kullman ("Elisha Scott Loomis," The National Cyclopaedia of American Biography, vol. 15, New York, James T. White & Company, 1914, p. 186. Article by David E. Kullman, Miami University.)

ELISHA SCOTT LOOMIS, educator, author and man of affairs of Lakewood, was born on a farm in Wadsworth Township, Medina County, this state, September 18, 1852, son of the late Charles Wilson and Sarah (Oberholtzer) Loomis.  …  He was superintendent of schools at Shreve, Ohio, from 1876 to 1879; principal of Burbank Academy at Burbank, Ohio, from 1880 to 1881; principal of Richfield Central High School, Summit County, Ohio, from 1881 to 1885; professor of mathematics in Baldwin Wallace University from 1885 to 1895, and from 1895 up to the close of 1923 was head of the department of mathematics in West High School of Cleveland. At the last mentioned date he retired on school pension, having reached the limit established by Ohio law which provides that no teacher of the public schools shall hold position after having reached the age of seventy years. He taught his first school, beginning in April, 1873, and completed his last term of teaching in June, 1923, thus rounding out a full half century of successful teaching, and but for the intervention of the Ohio school law limiting the age of teachers for school teaching he would have continued his school work for an indefinite period, should he have so desired, for his physical and mental faculties are unimpaired, and "his spirit is willing."
http://www.onlinebiographies.info/oh/cuya/loomis-es.htm