Electrum and the Invention of Coinage

The book was typeset in sentences. The result is a disjointed narrative, a series of unattributed assertions and contradictory generalities. Despite those and many other problems with the text and narrative, the work was intended primarily as “a comprehensive handbook on the origins of coinage.” As such, its best feature is the presentation of 179 coins organized chronologically, geographically, and by size. Overall, the book would have been greatly improved by professional editorial management. 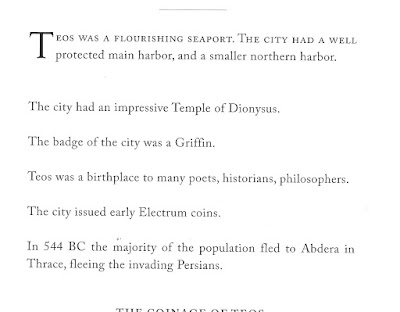 I believe that the author made note cards from the reference books he relied on and then wrote the narrative after sorting the cards more or less by main subject. Maybe he just wrote it all off the top of his head. However it was built, the lack of craftsmanship is painfully obvious. “Gold is immutable, Electrum has the appearance of gold. The first coins were made of Electrum.” (page 9). “The use of gold and silver coinage quickly spread throughout the known world, with City-States such as Kyzikos, Phokaia and Mytilene minting Electrum trade coinages with great success.” (page 74)


Capitalization is Germanic. “Electrum, Silver, Bronze, Copper and other metals all have been highly esteemed and valued.” (page 1) … “One Talent equaled 60 Minas. A Mina was worth 60 Shekels.” (page 3) … “An Eighth Stater of Erythrae, 1.77 g., with a Floral pattern round with pellets with a reverse of a shallow square punch is published as Sear, Greek Coins and their Values, #3462.” (page 127). The lack of italics for the title of the book is typical of other typesetting problems. Oddly enough, although the foundation of the bibliography consists of German titles, the u in Münze has no umlaut, though Muenze would have been acceptable.

The invention of coinage is a singular problem. It is easy to project ourselves on the past and assume that they were initially intended to be money and were created as a medium of indirect barter to facilitate economic calculation. Over the past 150 years, scholars have attempted half a dozen theories to explain the creation of coinage. In 1869 Ernst Curtius put forward a "religious" theory, since the word "money" stems from the temple of Juno Moneta. That these earliest known proto-coins and coins are definitely associated with the Temple of Artemis at Ephesus, which was excavated 40 years later, could substantiate that. Payment of mercenaries, specifically, as opposed to general commerce was the theory put forward by Robert M. Cook in 1958 ("Speculations on the Origins of Coinage," Historia, v11 1958, 257-262.)  Philip Grierson looked to the administrative needs of the early Greek city-states (Origins of Money 1970, 1976). Following Cook, Martin J. Price underscored the fact that these first coins were worth more than anything you could buy with them, and therefore, they were probably given to mercenaries as honor awards. (See "Thoughts on the Beginnings of Coinage" in Studies in Numismatic Method Presented to Philip Grierson, Cambridge, 1983). Given the intellectual ferment of archaic Hellas, those theories might all be true in some array of close context, but none of that is in this book. Linzalone cites Aristotle and Plato who posited the need for a medium of indirect barter to facilitate commerce and leaves it at that.

The author does indeed acknowledge the consequences of the commercial revolution associated with the introduction of coinage. The event coincides with the rise of democracy, as well as the birth of philosophy, formal geometry, the ascent of a mercantile class, and the mercenary army. But understanding the place of coinage in that context requires teasing out those threads, which the author never does. He merely repeats that coins (beginning with unmarked proto-coins) were money. 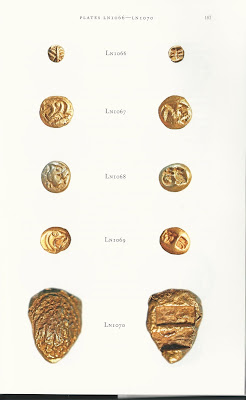 The author also projects into the past our atomic theory of matter. The first abstract conception of “elements”—earth, water, air, fire—came from Empedocles of Akragas c. 500 BCE. But it was not developed further until the Enlightenment and it was still argued into the 1800s, even as the periodic table was being worked out. The author misses the fact that electrum, silver, and gold were three distinct metals, as were copper, tin, and bronze. Demokritos of Abdera and others notwithstanding, lacking an atomic theory of matter, the ancients had no other way to understand electrum but to accept it as a metal in its own right, naturally occurring but capable of manufacture.

The primary strength of this work is the catalog of 179 images of proto-coins and coins, organized geographically and sorted by size. Each listing includes the weight in grams to two decimal places. Coin 1001 is an archaic proto-coin stater of Samos 17.65 grams and 17.5 mm in diameter. In every case that diameter is always the major axis of the ellipse. And most of these objects are elliptical, not the least of which is the famous Phanes coins of Ephesus. However, all of these images are reproduced at twice actual size. So, comparisons are easy. Moreover, modern technology allows the user to blow these images up even more before pixiliation and the loss of resolution. Unfortunately, except in the cases where the images were borrowed from the owners, no attributions or provenances are given; and the ones that are, give only the last auction house by name, not by sale and lot number.

In response to a request for an interview via email, Joe Linzalone wrote (verbatim): “It is a hand book filled with useful facts and information about the coinage and the issuers. Focusing thus I did not maintain a narrative story-teller stance. The book was written on request off my colleagues, in that I am the foremost dealer in Electrum, with 41 years experience. I was asked to write that my expertise would not be lost when gone.” According to Worldcat.org, the book is shelved at 14 libraries including the Library of Congress, the University of Oxford, and the University of Queensland. There, and on the shelves of private numismatists, this “comprehensive handbook” will serve as best it can.

PREVIOUSLY ON NECESSARY FACTS
Not Conned by Sehgal's "Coined"
Gresham's Conjecture
Supplies and Demands
Numismatics: the Standard of Proof in Economics
Astronomical Symbols on Ancient and Medieval Coins