Not Conned by Sehgal’s Coined

A degreed economist (LSE) who works for J. P Morgan, Kabir Sehgal is the author of Coined: The Rich Life of Money and How Its History has Shaped Us. By its title, it is obviously a book with a great breadth of scope for its 257 pages of narrative. However, every story that I already knew was arguable. This is a scissors-and-paste effort, quickly assembled without deep reflection, insight, or questioning. In truth, throughout the book, the author does present the facts approximately. He gets almost all of it almost right. But as we say, “close only counts in horseshoes and hand grenades.” 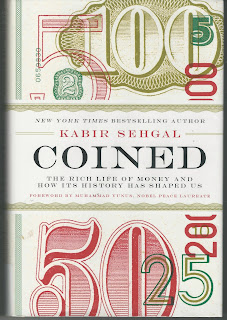 As this is a book about the history of money, the origins of money are important. His narrative is incomplete, coming from secondary sources. Sehgal apparently failed to grasp the central facts of the event. The same is true for the invention of coinage. Sehgal does correctly understand the fact that seems curious to us today, that promissory money, “soft” money, preceded precious metals as hard money by thousands of years. That said, the story of ancient Sumer and the creation of promissory notes (pg. 86) is wrong in so many details that it is wrong in substance. His deepest misunderstanding is the claim that clay balls containing tokens were a form of proto-currency (page 104). They may have been a harbinger or foreshadowing of that, but he completely misses the significance of the contemporaneous invention of writing. For the correct accounting see “Debt: the Seed of Civilization” on this blog, which points to the works of Denise Schmandt-Besserat.

On the invention of coinage, he again relies on secondary popularizations, rather than the best academic research. And he fails to ask delving questions. He claims (as many do) that coins were invented in Lydia before 630 BCE. But he also identifies the famous hoard of the oldest known coins and coin-like objects, from the Temple of Artemis at Ephesus. Why were the oldest known coins and proto-coins not uncovered within the excavation of Sardis, the royal site of Lydia?  Ephesus, Miletos, and Kolophon have been suggested as possible candidates for the first cities to strike coins, not for commerce, but as bonus payments to mercenaries.

Sehgal never questions the economic motive for the origin of coinage. But if they were invented to facilitate commerce, they would have originated at a center of commerce. And they would have been commercially convenient. In fact, the first coins came from a cultural hinterland, the Turkish coastline of archaic Greece. And they were worth more than anything you could buy with them, as if today, the smallest bills were $1000 and relatively rare, while $10,000 bills were common. And Sehgal completely misunderstands electrum, the naturally occurring alloy, nuggets of which the first coins were struck. Lacking anything like an atomic theory, gold, electrum, and silver were three distinct metals, even though the ancients knew that electrum could be made by alloying gold and silver; and that electrum gold could be parted from electrum silver.

Seghal never stops to ask why but just keeps going with a facile, though interesting, narrative.  He correctly identifies the fact that coinage is closely tied to the development of democracy, but he misplaces the origin of democracy at Athens.

It does not get any better with his stories about Nero, Diocletian, Lincoln’s greenbacks, or Bretton Woods.

Kabir Sehgal lavishes praise on the deep knowledge base of the numismatic auction house, Stack’s (pgs 247-249) and rightfully so, but simply cites Q. David Bowers as “David Bowers, legendary numismatist and business partner of Harvey Stack.”  Harvey Stack gets all the credit. And he is worthy, indeed. But everyone in the know calls Q. David Bowers “the dean of American numismatics.”

So, as much as I would like to believe that a cash economy created niche employment for the beggars of Jakarta as extra riders to validate a taxi cab’s right to the high-occupancy high-speed traffic lanes, I have to remain doubtful that Sehgal actually understood what was happening.