Over the weekend of September 25-27, I completed the first of three courses in leadership development required for non-commissioned officers in the Texas State Guard.  Unlike basic training, prior federal military service does not earn an exemption from the studies. PLT is required for promotion to E-5 (Army sergeant, Air staff sergeant, or Maritime petty officer second class). Following that are BNOC and ANOC, the basic and advanced courses for sergeants (and petty officers) through the highest grades. The BNOC and ANOC classes ran concurrently to ours.

Delivered in a standard classroom environment via PowerPoint slides supported by lectures, the PLT course covered the missions of the TXSG, the principles of leadership, the basic structure of written orders, the chain of command, the essentials of critical thinking and effective listening, and the fundamentals of motivation.  We also received an overview of WebEOC operations. Our instructor was a command chief master sergeant from the TXSG Air Component Command. He was also the non-commissioned officer in charge for the weekend. In addition to the airmen, most of us were TXSG Army component, while four were from Maritime.

Critical Listening
"The ability to listen critically is essential in a democracy. On the job, in the community, at service clubs, in places of worship, in the family—there is practically no place you can go where critical listening is unimportant. Politicians, the media, salesmen, advocates of policies and procedures, and our own financial, emotional, intellectual, physical, and spiritual needs require us to place a premium on critical listening and the thinking that accompanies it." – Listening Effectively by John A. Kline, Air University Press, 1996.
During the course, repetition defined the most important teaching points.
The Problem-Solving Process

1. Define the problem and the criteria for a solution.
2. Identify your options.
3. Evaluate the options against the criteria.
4. Assess the strengths, weaknesses, opportunities, and benefits.
5. Assess the risks and liabilities.
6. Compare the alternatives.
7. Identify and select the best alternative within the resources available.
(from the Civil Air Patrol Squadron Leadership School Squadron Leadership School Seminar 4.3 online here.)

When disaster strikes your community, do you know what to do for yourself, your family, or neighborhood? Your city or county probably has a CERT program for training volunteers. The classes are free. You do need to commit to all 20 hours, typically two hours a night, once a week. I took a weekend class, 4 hours on Friday night, and two 8-hour days Saturday and Sunday.  And, of course, you can find a wealth of information online to supplement the training.

The organizing framework is called the Incident Command Structure. ICS is becoming common across all first responder agencies. I learned it when I worked as a contract technical writer for the Texas Department of Public Safety. I learned it again when I joined the Texas State Guard.  You can find the ICS explained online in a certification tutorial from FEMA.  (See IS-100a on the FEMA independent study online course guide here.)  ICS is how the Austin Police plan for all the parties we have here – South by Southwest, Austin City Limits Live, Formula One, Republic of Texas motorcycle rally, and over a dozen races, runs, and marathons, and another dozen parades, marches, and celebrations.  You can plan a birthday party by following the Incident Command Structure.

The salient point for first responders is that the first person on the scene is the Incident Commander until the next more qualified person arrives.  Qualification is not by rank. If a rookie cop has completed ICS training, but her captain has not, she remains in command of the incident. (If the incident involves multiple agencies and jurisdictions, the police captain could become a member of a unified command team.) The commonality of FEMA ICS usually means that some senior responder from the fire department or emergency medical service holds all the right certifications, but it could be anyone.

In addition to the ICS, the 20-hour CERT training covers expected emergencies, with fire being the common denominator. Where you live, the likely event might be a flood, tornado, hurricane, or earthquake. Each has its special demands, while fire makes a good model for all of them.  We also covered general preparedness, floods, medical responses, search and rescue, the psychology of disasters, and terrorism.  Though not a Red Cross certification in active response, the medical session was extensive, and took six-and-a-half hours.

“Spontaneous volunteers” have been called “the disaster within the disaster.” They want to help, and they bring important resources, not the least of which is enthusiasm, which is important to on-site  workers who are fatigued.  But spontaneous volunteers often arrive without food, water, bedding, or tools.   This class gives you a firm understanding of what you need to do in order to be most helpful to the most people in the shortest time.  That mandate from the ethics of utilitarianism is the watchword: “The greatest good for the greatest number in the shortest time.”

Volunteering in an Emergency: What to Expect
Your State Defense Force
Firefighters
Evaluating a Dive Team

Posted by Michael E. Marotta at 11:05 No comments:

The law of identity is an absolute. Your right to trial by jury is not an absolute.  That humans have a nature is absolute. Existence is identity. To be is to be something.  However, not every claim about "human nature" is absolute (or even true).

Absolutes are not contextual.  Some people claim that taking a human life is absolutely wrong.  Immanel Kant's deontology ethics were absolute, to be carried out whether any one benefited or not - in his words, to be carried out even if they caused harm.

The law of identity is absolute. This lamp in my office is not. I could paint it blue. I could disassemble it, and some point, it would cease to be a lamp qua lamp. I could use the bulb screw sockets to mount relays and use it as a switch for a model railroad. In fact, I could mount photocells on it, leaving the bulbs in, but rendering it unusable as a lamp qua lamp, while it is a switch. That would be its identity: a switching mechanism made from a lamp. That the lamp has some nature is absolute. Existence is identity. Although the nature of the lamp is mutable, I can do nothing to change the law of identity.

Some people claim that it is absolutely wrong to take a human life. Libertarians typically offer self-protection and defense of your rights as contexts to allow killing.  The moral absolutists disagree. For them, the wrongfulness of homicide is like the law of identity. They are wrong, of course, and it is because context matters. Taking a life may be wrong, or may not. It depends on the context. Knowing the context requires an objective understanding: perceived evidence explained by reason.

Ayn Rand said that the choice to think is the fundamental choice. But do you not need to be thinking in order to choose to think? You do not. The choice to think is avoided by evasion. Rather than focus – rather than think – the mind goes blank, or switches to some other non-threatening stream of consciousness. The choice to think must be made consciously.  So, too, is the decision to discover and apply context, a choice. That choice is one that absolutists seek to avoid. Once something is true or false, good or bad, right or wrong, there it must remain forever, never to be re-examined.

And, indeed, absolutes do exist. Existence itself is absolute. Your need to choose your values is absolute. If you ignore that, it is no less destructive than ignoring the laws of physics while driving your car. But not every truth is absolute. Absolutes are the deepest and broadest of truths. Mid-range truths are often contextual: they are objectively true, i.e, empirically perceived and rationally explained. The perception might change. The nature of the event might change. Understanding – the theoretical model of explanation – could be improved.

Humans could not hold abstractions in their minds until we had language. By “language,” I mean something conceptually different from animal calls.  By language I mean the expression of a mental state with no external stimulus, i.e., with an internal motivation only.  In other words, the event that triggered the communication was not the presence of a predator or the calling to a mate. It was not the feeling of hunger or thirst. It began within the mind of the creator.

The making of a stone hand axe was taught by demonstration for perhaps one million years across three species of hominids. But the communication by demonstration was necessarily limited. Our modern languages are no more than 10,000 years old. Language itself is no more than 100,000 years old. You began to learn language before you were born when you heard (felt) your mother's voice.  And yet, creators and inventors were (and remain) difficult to understand. We do not share their mental states, the way our ancestors shared the demonstration of how to make a hand axe.

Moral absolutes do exist. They are very basic and very broad. The fact that we must choose our actions is the basis of morality. The fact of choice is morality. Whatever is objectively in your best interest is not of necessity in my best interest. Those truths are objective, not absolute.
Knowledge Maps
The Map that Changed the World

Posted by Michael E. Marotta at 17:41 No comments: 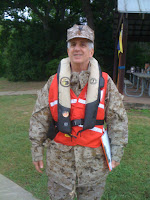 On April 11, 2015, I was ordered to be an evaluator for a training exercise during the annual drill of TMAR, the Texas Maritime Regiment of the Texas State Guard. It so happens that I am a petty officer third class in TMAR, but that was not necessary. What was important was my understanding of the Incident Command Structure.

I am assigned to TXSG headquarters as a technical writer and a trainer for WebEOC, the virtual emergency operations center. When I enlisted on November 22, 2014, I brought with me several years of experience as a trainer and instructor in adult education.
The divers form a close community. They have worked together before. They know their craft. To become a diver, you first serve an apprenticeship as a dive tender. The tenders themselves typically are divers, also, but not certified for rescue operations.
The training scenario was complex. An armed robbery had gone wrong. The criminals had taken two hostages, a woman and her child. In the ensuing chase, they lost control of their vehicle and it went into a lake. Ground search and rescue concentrated on the shoreline. The dive team used sonar and side-looking radar to locate the vehicle. 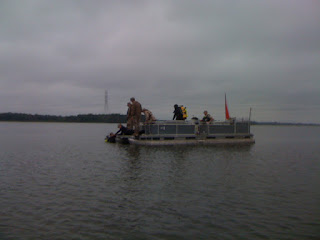 Having found it, they attached inflatable bouys and towed it to the boat launch ramp where it was brought out of the water. At the same time, the "bodies" (dummies, of course) were located and transported to shore.
Working closely, the divers and the boat crews were in constant contact, both by radio and by open verbal communication. Nothing happened until everyone was clear and ready. 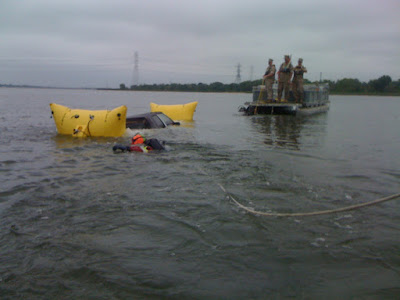 Meanwhile, the two patrol boats circled the area, keeping pleasure boaters away from the crime scene.

I kept a running chronology, noting the hour and minutes for every significant action. Divers were taken to the scene. Some were exchanged. Some equipment was replaced. The car had to be located and identified. The bodies were extracted and taken to shore. The vehicle was secured, towed, and extracted. I also noted radio calls to the incident commander on shore and instructions and other information that was exchanged.  The entire exercise took about three and a half hours.

Posted by Michael E. Marotta at 21:39 No comments: