On or about July 17, 2017, this blog tallied its 200,000th page view. Launched on 2 January 2011, about 100 people per day read the posts, often as a result of Internet searches for topical information. Everyone can be a publisher, and perhaps too many people are. But I believe that we are experiencing a renaissance, a silver age, if not a golden age, in which the sharing of information – facts and opinions alike — creates a flourishing. Our lives are better.

In a previous post, I wrote about Jerry Emanuelson’s algebraic proof of Ricardo’s Law of Comparative Advantage. Emanuelson has other interests. He previously created and marketed a high school level kit for experimenting with superconductors. The Internet gave him an easy and extensive exposure. 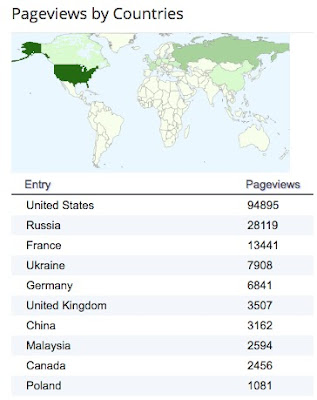 Science hobbyists of our generation knew well the Edmund Scientific Catalog. Edmund also wrote about the scientific method. He taught it as a 14-step engagement in discovery. Norman W. Edmund lived long enough (1916-2012) to bring his work to the Internet (see here http://scientificmethod.com/index2.html ). It proved much more efficient than the U.S. Post Office.

The most popular articles from this blog so far are:
What (if anything) did Dorothy Learn? (4626)
Contradictions in the Constitution (2400)
Alongside Night to Run in Austin (1799)
Bob Swanson and Genentech (713)
William Sheldon: Psychologist, Numismatist, Thief (655)
Debt: the Seed of Civilization (556)
Crimes Against Logic: Exposing Bogus Arguments (409)
There is no John Galt and that’s Worse (356)
Supplies and Demands (340)
Romantic Realism (339) 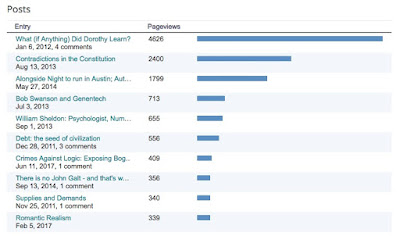 Those numbers come from the Stats under the All time button on my control panel. However, I also have other numbers under View Count in the Posts:

The search terms that bring people here include Çatal Hüyük, (catal huyuk), supply and demand, supply and demand curve, contradictions in the Constitution, Merry Newtomas, and Employee Theft Facts. Although I write about Newtonmas every year, none of them makes the top of the lists.