Happy Pi Day of the Century 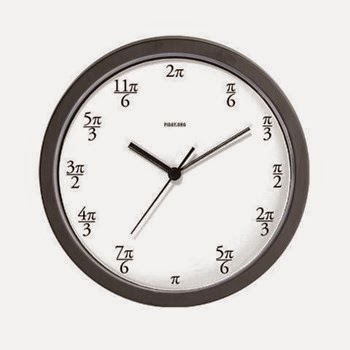 Pi Day dot org  gives many suggestions for circular festivities – and the first million digits of pi here.  And they sell a clock, with a circumference measured out in radians or fractions of pi.

The formula for the circumference of a circle is pi times the measure of the diameter: pi times d.  We usually learn C = 2 pi r first because twice the radius (2r) is the diameter, and we usually draw a circle with a compass by measuring the radius.

We use the lowercase Greek letter pi because it begins the Greek words “perimeter” (“measure around” perimetron) and “periphery” (“carry around” perifero). It is something of a modernization because Euclid, Archimedes, and the other ancients only had what we now call capital letters.  The lowercase letters were invented in the Middle Ages.

(The Middle Ages followed the Dark Ages, which is where software applications management and marketing teams live permanently.  Blogspot has no Symbol font; neither does WordPress.  We live in an age of ignorance. Seeking a personal Renaissance, I have a year to figure out the CSS and code my own or find a plug-in, sort of like when the West learned Arabic numerals.)