From Texas to the Moon with John Leonard Riddell

John Leonard Riddell was the first working scientist to publish a science fiction story, Orrin Lindsay’s Plan of Aerial Navigation, with a Narrative of His Explorations in the Higher Regions of the Atmosphere, and His Wonderful Voyage Round the Moon! (Rea's Power Press, New Orleans, 1847). The story was based on a presentation to the People's Lyceum of that city on April 30. 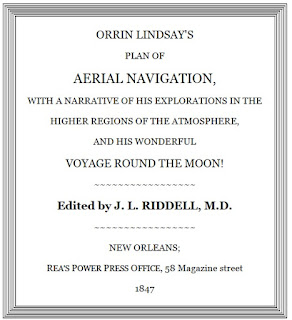 Riddell catalogued plants. He served as chief melter and refiner at the New Orleans Mint from 1838 to 1849. He was a medical doctor, completing two different degrees, one of which he renounced. He advocated for the germ theory of disease at time when the miasma theory was more widely accepted.

While teaching at the Louisiana Medical College (now Tulane University), Riddell invented the binocular microscope. He carried out two geographical and botanical surveys of Texas.

Born in Leyden, Massachusetts, February 20, 1807, he was the oldest of ten, After completing a bachelor of arts degree in 1829 at Rensselaer School (now Rensselaer Polytechnic Institute), Riddell taught in his own grammar school. But it was not for him. Moving to , he completed his first medical doctorate at the Ohio Reformed Medical College in (March 31, 1834). He then earned a second at the Medical College of Ohio in , March 5, 1836, and discarded the first, calling the curriculum useless.

Riddell was an herbalist. He collected rare plants for many reasons but always in search of those that heal and prevent sickness. Perhaps the best validation of his scientific acumen is that fact that he sold his collections by subscription: people paid him to find flowers.  In fact, his work in in the 1830s is still considered significant today. was a state by 1803. The frontier was fast retreating. Riddell sought, gathered, and identified plants that were disappearing as civilization erased untamed wilderness. In addition to pressing plants, Riddell created accurate portraits of them. Riddell’s status as a scientist is known to botanists. Several species are named for him. His work is still the basis for new examinations in our time.
Riddell then moved to .  An active Democrat, he won an appointment as chief melter of the New Orleans Mint. He published A Monograph on the Silver Dollar, Good or Bad (E. Shepard, 1845; and Soxiedad Numismatica de Mexico, 1969.)  The reprint is based on the fact that in 1845,the “silver dollar” was the Mexican peso; US federal dollars were rare patterns and low mintages. Mexican silver circulated as legal tender in the until 1857. While at the Mint, he improved on the machineries; his rotary ingot machine was in use as late as 1904.

﻿﻿ In 1839, Riddell came to .  He published “Observations on the Geology of the Trinity Country, ” in the American Journal of Science and Arts, November 1839.  Riddell’s diary was republished as A Long Ride in Texas: The Explorations of John Leonard Riddell by Jo Breeden, editor, (Texas A&M University Press, College Station, Texas: 1994).

John Leonard Riddell was acknowledged as brilliant – even without peer – among his contemporaries, for instance by Edward H. Barton, then also of the University of Louisiana, who debated against him on the germ theory of disease. Though given to no end of professional quarrels – even convicted of assault while at the Mint – Riddell was a favorite with his chemistry students. Riddell was uncompromising, flamboyant, even violent. His debates in the pages of newspapers wore out at least one editor.

Riddell rejected the “miasma” theory of disease, the claim that unhealthy vapors cause sickness; and believed firmly that diseases are caused by “animiculae” or “germs.”  (Although microscopic “animiculae” were known from 1670, they were thought to be a consequence of the illness. Most people, including doctors, believed that sickness is caused by a miasma, hence "malaria" or "bad air.") In arguing for this theory, he engaged every tool and trick known to rhetoric and debate.

On the evening of April 30, 1847, Riddell delivered to the People’s Lyceum of New Orleans, a story of aerial navigation.  On May 8, from the Branch Mint, Riddell answered a note sent by nine of those present asking him to publish the adventure.  He agreed to bring out Orrin Lindsay’s Plan of Aerial Navigation with a Narrative of his Explorations in the Higher Regions of the Atmosphere and his Wonderful Voyage Round the Moon! (New Orleans: Rea’s Power Press Office, 55 Magazine Street; 1847).  I found this lost work archived in the microforms at the .  The full text runs 33 pages. Being Riddell presenting Lindsay’s story, it begins with several pages of background, including his own disclaimers and endorsements.

Orrin Lindsay was a student of natural science whom Riddell knew in where Riddell taught chemistry.  Lindsay invented a means of screening out gravity.  Like a space opera of the 1950s, Riddell goes into detail on the theory, though remaining vague on the material of the screen.  Even did not theorize about what gravity “is” and Riddell’s questions suggest the thinking of modern physicists.  Gravity cannot be itself a material substance. (We would say that no graviton particle exists.) Gravity cannot be “pure motion.”  It cannot be “quiet and inherent in matter” because any body would use up or give up all of its inherent gravity.  In short, Orrin Lindsay’s better understanding of gravity’s true nature allowed his invention.

Lindsay created a screen from “well prepared steel, after being superficially amalgamated with quicksilver, and then strongly magnetized.”  Lindsay carefully experimented with models to determine that he could build a spherical “balloon,” outfit it with suitable supplies, and journey to the Moon.  The wonderful material prevented gravitational attraction.  Where the material was not, attraction occurred.  Thus, by opening a view port in the direction of the Moon, Lindsay traveled there – but not before carefully testing the device in a trial ascent.
﻿﻿
The story is remarkable for its scientific accuracy.  Not only is it footnoted with laborious algebra to prove its points, but Riddell possessed the ability to imagine the physical consequences of space travel. “An indescribable sensation seized me.  I could not tell up from down.  I had lost all bodily weight. … The slightest springing effort, sent me slowly from one side of the balloon to the opposite.”  He accurately described a candle flame in zero-g: “The flame of the taper became globular and less luminous; -- the heated air from it, seemingly not knowing which way to rise, diffused itself slowly in every direction.”

Instruments based on air pressure showed his altitude as he rose.  He grew uncomfortably colder, the same experience well known to private pilots in small craft in our time.  Also known by experience in our time is this description of the sky: “The higher I ascended, the deeper became the blue of the sky until at my greatest altitude, it became almost black… My breathing became quick and laborious from the rarified condition of the air. … I resolved to commence my descent. For this purpose, I increased the lower opening, and looking down, far below me, I beheld a mass of fleecy, sun-light clouds, of pure white appearance, like giant locks of the finest cotton.”

Before the second ascent, the balloon was made air-tight with sheets of lead and rubber.  Better prepared with insulation, tanks of compressed oxygen, and chemicals for cleaning the air, Lindsay and his companion – Abner Jossilin of , a maker of “philosophical instruments” – took off for the Moon.  (The recycling of air and water was another prescient feature of this story and the calculations are provided for the reader.)  They saw meteors in the upper atmosphere, to corroborate the theory that these are indeed bits of interplanetary stone attracted to the Earth and glowing by friction with the atmosphere.

At 100 miles above the Moon, their orbit took “one hour, 54 minutes and 17 seconds. … We were everywhere presented with the evidences of former volcanic action.”  On the dark side of the Moon, they saw an active volcano.  “Respecting the appearance of the earth before starting from the moon, it is proper to relate that she looked like a new moon but fifteen times larger.” As they traveled back to Earth, the view changed. “She looked like an enormous moon, almost in her first quarter. …A delicate blue ring mottled with flakes of white… The prevailing green of fertile islands and continents, the pale sands of arid deserts, the naked rocks of mountain ranges, the glistening ramifications of rivers, and the polished convexity of the oceans all were clearly to be discriminated. … Brilliant beyond description were the icy regions about the South Pole, illuminated as they were by the sun.”

The balloon entered the atmosphere and the description could have come from The Right Stuff.  “We felt a slight shock, and perceived a flash of light as we passed through the aerial billow; the friction of the balloon upon the air being sufficient to produce that effect.  In a few moments our meteoric light ceased … and again the light reappeared accompanied by another slight shock… These singular phenomena, I presume were produced by the balloon’s rebounding from the aerial billows, just a cannon ball will ricochet along the surface of the water.”

After circumnavigating the Earth they land back at the launch site and the story ends.

Like other scientists from Thomas Huxley to Isaac Asimov and Rudy Rucker, Riddell wrote science fiction.  Unlike anyone else, however, he was the first.
His uncompromising forensics finally felled him. President Buchanen appointed him post master before secession (August 1860); and he exercised his duties even during the war. With the Union army in the city, Riddell arranged for his election as governor of the state, a sham that did stand up.  At a caucus on October 2, 1865, he berated his Democratic Party compatriots on the folly of secession. Hounded from the hall, he retreated to his library to write his rebuttal, but he suffered a heart attack and died on October 7.