The authors point out when the fiction exceeds the science.  (In the eponymous Fantastic Voyage, in which a submarine and its crew are shrunk to be injected into the bloodstream of a patient, small as they may become, what happens to their mass?) The second edition brings the work from the VCR to the DVD, from the Internet to the Worldwide Web, from ST:OS “The Arena” to . 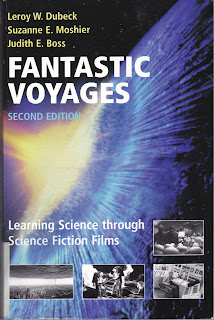 As a textbook, this could serve a general science class for bright middle schoolers, or even a community college general survey for non-majors. The writing is clear, though compact and condensed.  The instructor will need to supplement the terse text with “chalk talk” to explain the derivations or discoveries, as well as the consequences.  This book might be a good criticism review for a student in cinema now who wants to avoid later having their work be cited by science teachers as a bad example.  However, it will not help in a positive way to craft good science into a science fiction movie from the viewpoint of the screenwriter or director.

This book is perhaps a “third time charm.” The professors previously collaborated for Science in Cinema: Teaching Science Fact Through Science Fiction Films (Teachers College Press, 1988).  Leroy W. Dubeck is a (full) professor of physics at .  (He is rated as easy (3.8), but not helpful (2.4) on RateMyProfessors.com.)  Suzanne E. Moshier is (full) professor emerita for biology at the . (She pursues fleas and ticks. Her students give her the best mark for Clarity, a mere 2.0; and 1.8 for Helpfulness and Easiness.)  Dubeck and Moshier also collaborated on Threats to Humanity (Ishi Press, 2008) about asteroids, global warming, and such.  Judith E. Boss is a (full) professor emerita at the where she taught English. Her interests range from computer applications (see Project Gutenberg) to Willa Cather. (As a teacher, she was a considered fair to middling: 2.7 with a 3.0 for Helpfulness.)

ALSO ON NECESSARY FACT
Monsters from the Id
Where all the Children are Above Average
World Peace  Through Massive Retaliation
Teaching Ethics to Engineering Students
She's Such a Geek!