Goofy was the last cat to live with us. When Laurel rescued him from the wheelwell inside a truck hood, he might have been a month to six weeks old. When he died 20 November 2015, he was 19.  He had stopped eating four days before. He had been losing weight, down to 9 at the end, from almost 20. He had a lot of muscle.

He dodged at least nine bullets. The first was shortly after my wife and daughter brought him home. The vent cover was off in my daughter’s room, and Goof jumped in. They were panicked and called a furnace guy immediately. Apparently, it is a known problem, because he told them that cats seldom make it all the way to the furnace, and they should check the ducts all the way down. They did. 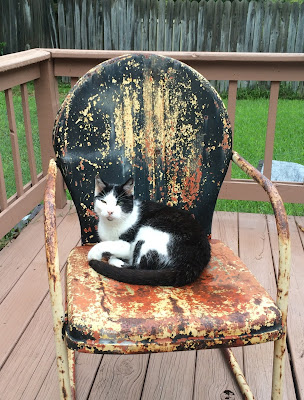 A dozen years later, he and I were sitting on the back porch in another house. I saw a motion. A skunk. Goofy’s hairs went out and his back went up. I said, “Goof, you don’t want to do that.” But he did. He was sorry. We washed him off with hydrogen peroxide, but he still smelled for a few days.

Goof always walked kind of pigeon-toed. Laurel thought that he would have made a good "Waiting" icon for Windows 95, like the the Dinosaur.


Goofy always had a furrowed brow; and he seldom purred: he was a cat of constant sorrow.  He was great for head butts and liked having his chin rubbed.  He was an avid reader.

About 2006 or so, a vet told us that Goofy had cancer on his spine. The expensive surgery was the only way to save his life. We did not have that kind of money, and, as it turned out, whatever was on his back was not malignant.

About the time that he met the skunk, he tore several of his back toes. They always were extended and never retracted. We think that he climbed a tree or fence to get away from something, but we were not involved in whatever that was, and could only guess.


"The Game of Rat and Dragon" by Cordwainer Smith

He was a Ph.D. professor of Asiatic studies at John Hopkins University. Like all myth, his science fiction stories are universal, but the special flavor of the alien is attributed to his interest in Chinese literature. He served as an intelligence officer in World War II with the rank of major.  About Paul Linebarger (Cordwainer Smith) here: http://cordwainer-smith.com/