Saving the World Through Beer

Save the World Brewing Co. of Marble Falls, Texas, is “America’s first 100% philanthropic production craft brewery.”  They just extended their service to humanity from their tap room to the bottled retail markets.  They create about a dozen different brews. I tasted three at my neighborhood Whole Foods and bought a six pack.

Save the World Brewing Company is the mission of former physicians Quynh and Dave Rathkamp. Their volunteer work overseas distanced them from “the first world problems” of most of the people they saw in their pediatric practices. They found themselves called by God to follow a different path.  (Full story here.) 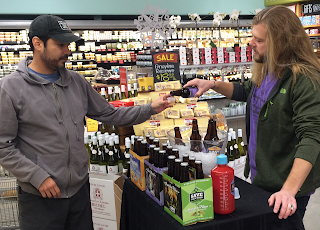 Their sales representative, Cory, was at Whole Foods. I recommended that he visit the Wheatsville Co-op; and he told me that he had just come from there, and they now have it on the shelf.

Cory brought Agnes Dei, Lux Mundi, and Humilus Filus.  I purchased the third.  It was a hard choice because all of them were superb. I have never thought much of Texas beers.  (See here and here. ) These were heavenly. They are full-flavored with overtones. The Lux Mundi was light, of course, yet tasteful and pleasing. I chose the warm and toasty Humilus Filius, both for culinary and philosophical reasons. My previous favorite had been Arrogant Bastard, but now I am converted.

(I wrote this last night. I went to post it this morning, and, of course, it was labeled "Draft.")