What can you do in a light second? Our 2005 Honda Civic turned 186,282 miles today. (I did not get the moment for a snapshot: I was on the freeway.)  Since 2005, we closed out Laurel's parents' estate, moved to Ann Arbor, completed our degrees, and moved to Austin. 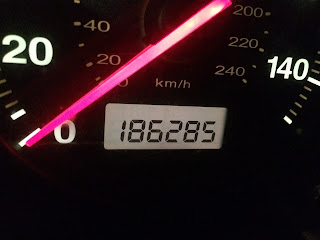 For seven years (2004-2010), I wrote the "Internet Connections" column of the ANA Numismatist magazine. ANA President William Horton presented me with a special Presidential Award for my work in the hobby.  I also served until 2011 as the webmaster of the Michigan State Numismatic Society. For a few years (2004-2007), I was the magazine editor, also. I was appointed to the Board once and elected to the Board once.

My associate's and bachelor's degrees are in criminology because when work as a technical writer got hard to find, I picked up a job as a security guard in 2002. When we moved to Ann Arbor, I was hired by campus safety at Washtenaw Community College and served there for a year (August 2005 - September 2006). I then worked for Securitas (2006-2007) and Allied Barton (2007-2008). That was actually the same job: when the client changed contractors, we just changed uniforms.

The Washtenaw County Commission appointed me to the city-county community corrections advisory board, 2005-2008. I joined Infragard and ASIS: the American Society for Industrial Security.  Not finding work as a security supervisor, I returned to graduate school and earned a master's in social science. I chose that for the opportunity to plan my electives. I concentrated on transnational white collar crime.

Moving to Austin in 2011, I was hired by Securitas. I worked several of the downtown high rises.  I like being a business serving businesses.

In November 2014, I joined the Texas State Guard. As a petty officer third class in the maritime regiment, I work in Future Operations as a trainer and technical writer for WebEOC, the virtual emergency operations center. I also completed a certification with CERT, the city's Community Emergency Response Team.

Also in November 2014, my wife and daughter bought me a telescope. I joined the Austin Astronomical Society and earned a certificate in telescope operations for their Eagle Eye Observatory outside of Austin.

On the downside, since 2005, we lost four cats. BA ("Badass Little Cat") was struck by a car in Kingsley, Michigan. Madonna died of old age in Ann Arbor while we were out of town. The pet sitter claimed not to have seen her, but the evidence at the scene was clear: she died in my office.  Isis had been my brother's cat. We had her only for a couple of years.  She died here of natural causes at about ten. Losing Goofy was the hardest. He had been with us the longest, 19 years.

I started this blog on January 2, 2011. Over 136,000 visitors have read the 391 posts. The most popular article (1957 views) has been "What (if Anything) Did Dorothy Learn?" You never know what other people will find interesting.