This guide to hands-on learning instilled me with a sense of confidence about my ability to perform the basic mathematics of astronomy. The exercises start with measuring shadows to track the sun as evidenced by stone age monuments. Before the last one, the learner estimates the expansion rate of the universe according to Hubble’s Law. The learning does not end there. Prof. Hirshfeld is a good instructor, and the assignments come full circle. Having started with the Sun and Moon, the book ends by assigning the calculations to estimate the relative masses of Sirius and its dwarf companion. (Just to note: This is from the first edition of the book (2009); the second edition (2018) is a bit different; and a third edition is promised.)

The stars are pretty at any magnification. It is most important to understand what you are looking at. Following these structured exercises, I gained an intuitive understanding of how astronomy developed historically, and (more importantly) of my location in the universe.

It starts with the gnomon, basically a vertical stick in the ground. At the end of the shadow, you place a stone. In Chapter 2, several thousand years or generations later, you come to the conclusion that the angle of the Sun in the sky at mid-day is directly related to the length of the shadow relative to the height of the stick. Theta equals arctan(L over H).

Hirshfeld provides good, simple explanations of the math, though not in depth. At the back is a tutorial on basic trigonometry. Neither is a substitute for a semester of trig. Hirshfeld just gives you the number 57.3 without telling you where it came from. Similarly, it is true that although you do not need much mathematics to benefit from the hands-on calculations, you do need some. Even so, Hirshfeld steps you through work that you will come back to again. The same basic formulas are applied repeatedly to new problems from measuring the diameter of the Earth to measuring the distances to the Moon and Sun and then to the stars.

Even if you are completely math-phobic, you can still get a lot out this by at least reading through the exercises to appreciate how the Greeks, Galileo, Kepler, Newton, and the astronomers of the 19th and 20th centuries came to their conclusions. If all of the arithmetic and algebra is “digital” then “Activity 15: Picturing the Universe—How Photography Revolutionized Astronomy” is “analog.”

I put off the central exercise of “Activity 14: Parallax” until I finished the rest of the book. I could have just worked through it on paper, but I wanted to set up a yardstick in the doorway between the kitchen and the living room in order to take my own measurements. Alan Hirshfeld is the author of Parallax: The Race to Measure the Cosmos; W. H. Freeman & Co., 2001. So, I wanted to give him his due and take my time with the work before reading the book.

Activity  1  The World's First Skywatcher - YOU!

Activity  5  The Phases of the Moon

Activity  7  Aristarchus Measures the Size and Distance of the Moon

Activity  8  Aristarchus Measures the Size and Distance of the Sun

Activity  11  Isaac Newton and the Moon

Activity  12  Galileo Measures a Mountain - on the Moon!

Activity  16  How Bright is That Star? A Tutorial on the Magnitude System

Activity  17  The Realm of the Spiral Nebulae

Activity  18  Hubble's Law - in the Kitchen and in the Universe

In the second edition, Activity 19 is about Dark Matter. In fact, while I found the second half the H-R Diagram helpful, the introduction about height and shoes sizes was obvious. Perhaps plotting the land speeds and weights of various mammals would have been more analogous to the relationships between spectral types and luminosities. The second edition also replaced the work on Sirius A Sirius B with your own reflective essay. I believe that was a loss. The reflective essay could help the instructor modify the class. I still think that it would have been best left as extra credit. The H-R diagram is important to modern astronomy. 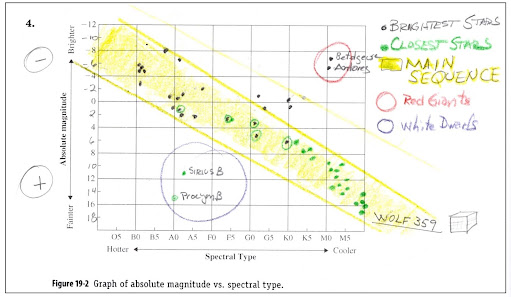 Although I have a calculator on my iPhone and my computer, I bought a new one just for this, a basic scientific TI-30Xa. It was $8.95 which is like 89 cents in 1978 dollars when we bought our first TI-30 calculators. The universe may not be expanding, but the money supply is. Still, I worked several of these in my head by approximation, 3 for pi, and so on.

In Support of the Entry-Level Telescope