As with the Andromeda Galaxy, I was pleasantly surprised and a little crestfallen to discover how easy it was to sight, given that I had never seen it before. I just did not know what was possible. I have a major shopping center one mile to my east and a smaller one a mile to the west. The lights of the city of Austin block my northern sky. And yet...

The Beehive Cluster is a bound group of 1000 stars in the constellation of Cancer. You can see it without an instrument from the city if you know what you are looking at. Naked eye it is a small, tight cluster about 3 fists to the right of the great sicle of Leo's head, in the more-or-less-open-space between Leo and the Twins. (The Crab is not visually compelling.) A telescope reveals much.
Most commonly catalogued as Messier 44, the Beehive is associated with another cluster, the Hyades which form the V of Taurus's horns. (See NASA Hyades here and NASA Beehive here.) The two clusters are the same age and moving in the same direction. (Aldeberan, the Eye of the Bull, is not physically a member, but only aligned visually from our perspective.) The Beehive is about 600 million years old and about 600 light years from Earth. It takes a larger telescope to view the entire cluster because at 1.5 degrees of celestial arc it seems as wide as three full Moons.

I spotted the cluster first with my binoculars, Bushnell 12x42 (12 power-42 mm front lens), to make sure that I knew what my target would be.

I started the evening by aligning my finder scopes on Venus. It is now nearing an apparent maximum brightness, though the crescent is waning. I used filters to cut down the glare in order to resolve Venus to a disk. 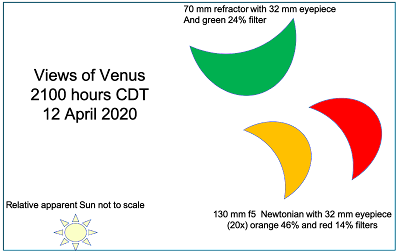 My new iPhone 11 is not yet compatible with my instruments.

The filter kit was easily the best bargain from Celestron. I felt validated when I saw other amateurs with big dobsonian light buckets using the same kit. My 5.25-inch (130mm) reflector came with a lot of short-cuts. I just lost another screw last night. Moreover, the reflector requires frequent special adjustment (collimation) of the mirrors. I recentlybought a collimator and followed the instructions but the images are still not as sharp as they are with my smaller 70 mm (2.75-inch) National Geographic refractor. Obviously, it takes some finesse. I was also surprised not to have noticed before that the refractor inverts the image differently than the reflector. Usually for astronomy it is not a big deal: there is no true up or down in space; left and right can be consequential. The refractor showed the bright side of Venus facing the Sun.

PREVIOUSLY ON NECESSARY FACT
Backyard Astronomy
Seeing in the Dark: Your Front Row Seat to the Universe
The Andromeda Galaxy