If I had known that it was this easy, I would have seen the Andromeda Galaxy 60 years ago. In Turn Left at Orion Guy Consolmagno tells of first sighting the stunning double star Albireo from Fort Lee, New Jersey, with a 3-inch refractor. Since reading that in early 2015, I have been even more sanguine about backyard astronomy.

So, it was clear last night and I did not have to go to work the next day. I checked the U.S. Naval Observatory (here). Mars would be past the meridian and the view to the west is not good for me (houses). Orion was not going to be high enough in the east (trees). I checked the sky maps for M3, an easy large globular cluster, but it would be below the visible horizon to the north (houses; city of Austin). But I was determined just to go out anyway. On a lark, I googled “locate Andromeda Galaxy tonight” and EarthSky.com assured me that it would be easy. It was. 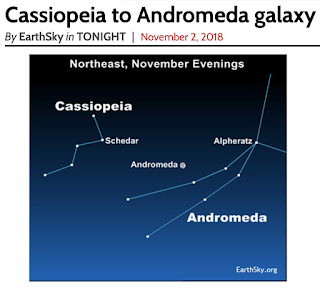 “Dark sky” was indicated, and that was not going to happen. But I figure that I could start with my binoculars (Bushnell 12x42). And it was right there. I had my Celestron set up. The finder broke a couple of months ago. (It just burned out and the rocker switch failed, just one of many small problems with this telescope over the past four years.) So, I spent about 15 or 20 minutes just lining up the tube and scanning back and forth, but soon enough there it was, as described: a hazy patch about the size of a full moon. I used both a 10mm (65 power) and 10 mm with 2x Barlow (130 power). Because the view was almost directly overhead, there was very little apparent motion as I switched oculars. Once I found it, I never lost it. I

With a 5-inch reflector in the city, the Andromeda Galaxy does not look like anything in the picture books.

When I came indoors, I turned to Burnham’s. The Andromeda Galaxy was probably known to the Persians from 900 AD. It was recorded as a stellar cloud by Abd al-Rahman al-Sufi in about 964 AD. (Wikipedia: Al-Sufi and Book of Fixed Stars ) It was always a hazy patch. Although it was first sighted in a telescope in 1615, our view of it only comes from photographic imaging with the  100-inch Mount Wilson after 1923. Since then, it has been imaged with much smaller telescopes and much better cameras. 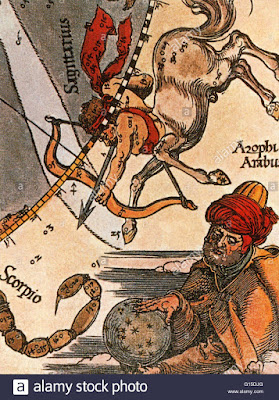 But even though Al-Sufi’s work was known in the West, it was not translated into French until 1831. Albrecht Dürer (1471-1528) drew an imagining of him, labeled “Azophi Arabus” charting the constellations.

“In the West, a Latin version of Ptolemy’s star catalog, from his Almagest, exists in several manuscripts, using Ṣūfī’s value of precession and containing drawings of the constellations after Ṣūfī’s models (see Kunitzsch, “Sufi Latinus”). Alfonso X of Castile (reigned 1252-84) had an Old Castilian version of Ṣūfī’s book made which was incorporated in his Libros del saber de astronomia. In 1665, T. Hyde, in the commentary to his edition of Uluḡ Beg’s star catalog, introduced many quotations from Ṣūfī’s book.” Iranica Online here. -- http://www.iranicaonline.org/articles/abd-al-rahman-b-omar-sufi