This year’s vernal equinox brought a solar eclipse that was visible across northern Eurasia. To view totality, you had to be on the Faroe Islands, 62° north between Scotland and Iceland, or the Svalbard group between Norway and the North Pole at 74° to 81° north.  I missed it entirely, and only saw the news the next day.  But I kept my head, unlike the drunken astronomers of ancient China.

(This is expanded and revised from an article published by The Sidereal Times (April 2015) of the Austin Astronomical Society.)

The story of Hsi and Ho came to my colleague Bradford S. Wade and me while we met often at The Tower Inn Cafe in Ypsilanti, across the street from Eastern Michigan University.  We had a class together, Ethics in Physics with Dr. Patrick Koehn.  After a few meetings or maybe only after a few beers, we took up a joint publication, a review of Astronomical Symbols on Ancient and Medieval Coins by Marshall Faintich.  We placed that in the Bulletin of the Society for the History of Astronomy, Issue 21, Spring 2011.

As for the drunken astronomers, the stories vary and are often retold, especially by sky gazers, but the teaching point is easy.  Hsi  (also given as Hi or He) and Ho were the court astronomers.  Among their duties, they were responsible for predicting eclipses so that people could beat gongs, shoot arrows, and otherwise scare off the dragon that was eating the sun.  However, they spent most of their time drinking rice wine, so they not only failed to predict an eclipse, but they also slept through it.  Fortunately for all of us, the common people rallied and chased the demon away.  Hsi and Ho were executed.

The story comes from an ancient manuscript known as The Book of Documents, which has been variously rendered as Shu-king, Shu Ching, Shujing, and Shangshu. (Wikipedia has an entry, of course: Book of Documents.)  The story of Hsi and Ho comes from the fourth part, fifth book, thirteenth chapter.  There, the chancellor, prime minister, or “prince” Yi Ying exhorts government officials not to be derelict in their duties as were Hsi and Ho. All of that happened in legendary times.  (The earliest attested date in Chinese history is equivalent to 831 BCE.)  The most likely date for the eclipse in question is October 22, 2137 BCE.

You can find some reliable modern detail at the Astronomy Today website.  Put “ancient eclipses” in the search box and it should come up first after the Google Ads.  The story of Hsi and Ho is in Part I. The story is embellished in Totality: Eclipses of the Sun, by Mark Littmann, Fred Espenak, and Ken Willcox (Oxford 1991; also on Google Books).  A brief note about the drunken Chinese astronomers, ending with an original poem, appeared in The Journal of the Astronomical Society of India, vol. 4. No. 3, Jan. 1914.  It was cited as coming from The Observatory for December 1913.  Indeed, it did appear in Volume XXXVI, Number 468, page 478. The author was C. Thomas Edgar

The pages below are from The Chinese Classics, Volume 3: The Shoo King or Book of Historical Documents by James Legge, first published by the author at Hong Kong in 1865, then reprinted with errata and corrigenda by Clarendon Press, Oxford 1893-1895.   Below these lines are lengthy glosses on the nuances of the grammar and syntax  of the ideograms.  A modern version (with only a few notes) was edited by Clae Waltham and published by Gateway Editions from Henry Regnery, Chicago, 1971.  You will see that at first Hsi and Ho are the family names of two sets of brothers.  Then, they became individuals.  Also, Legge's translation was before even the Wade-Giles system and is far from the modern Pinyang rules. 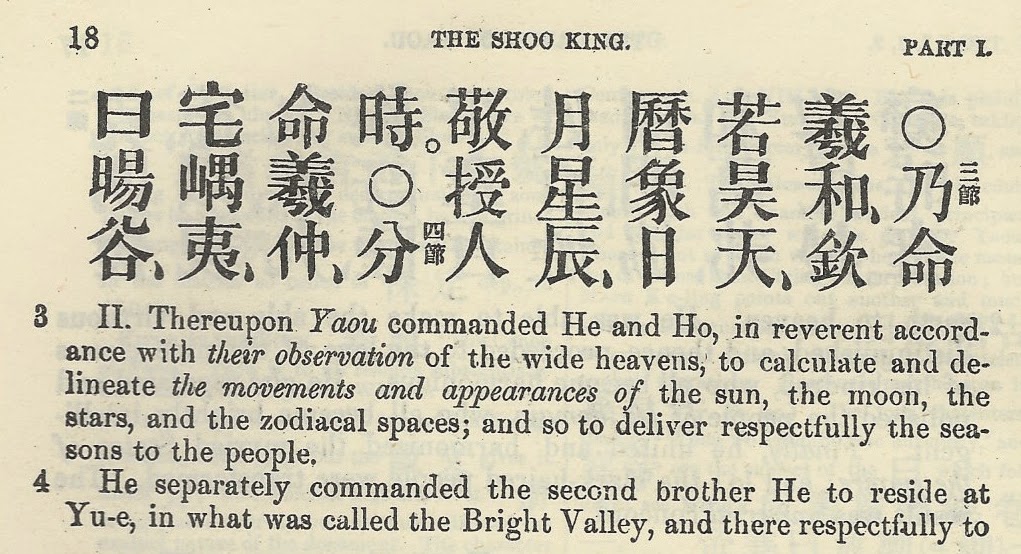 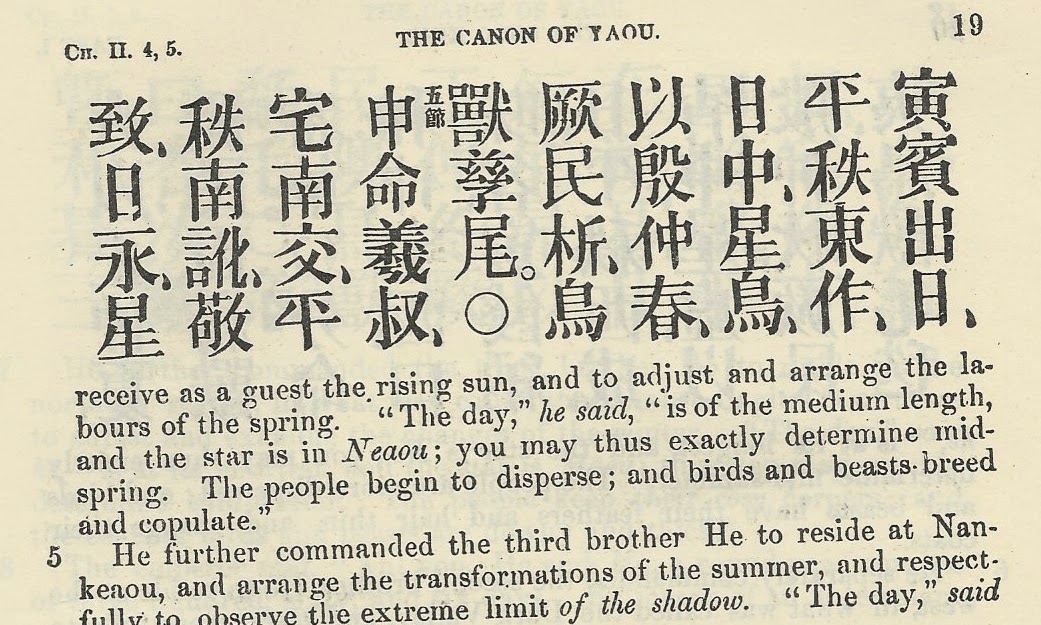 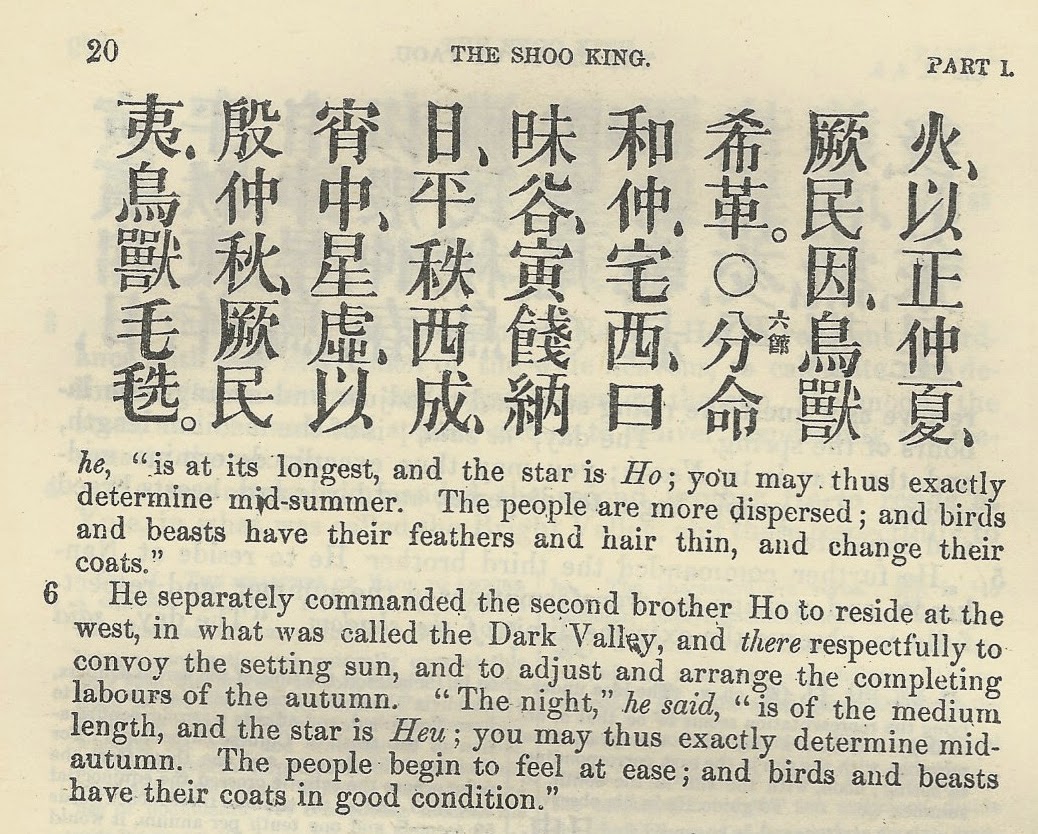 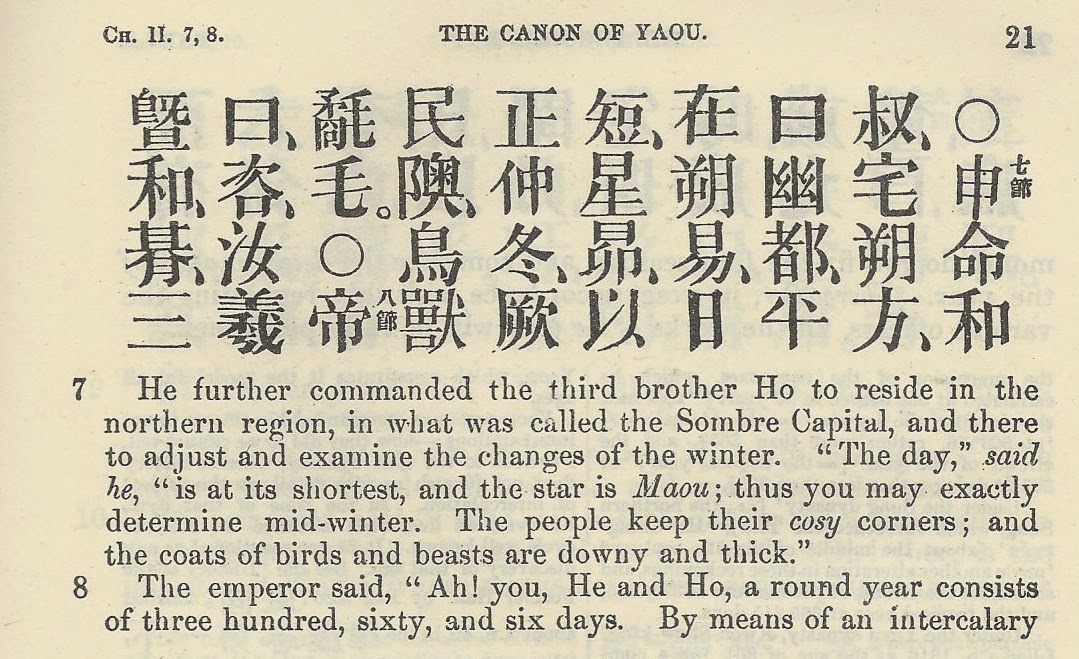 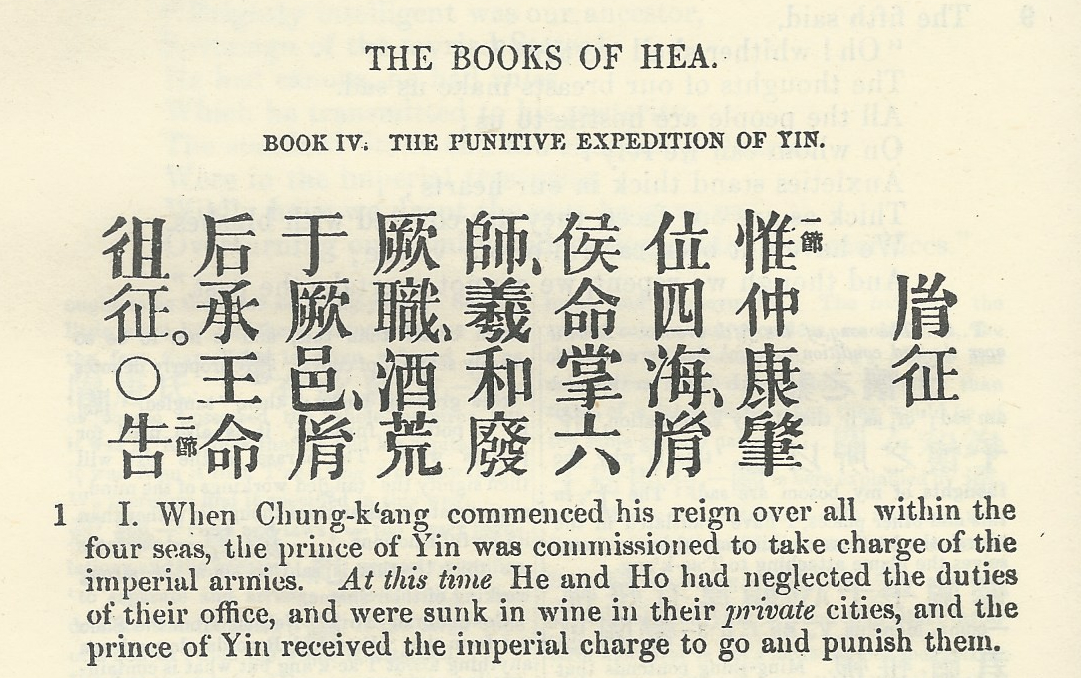 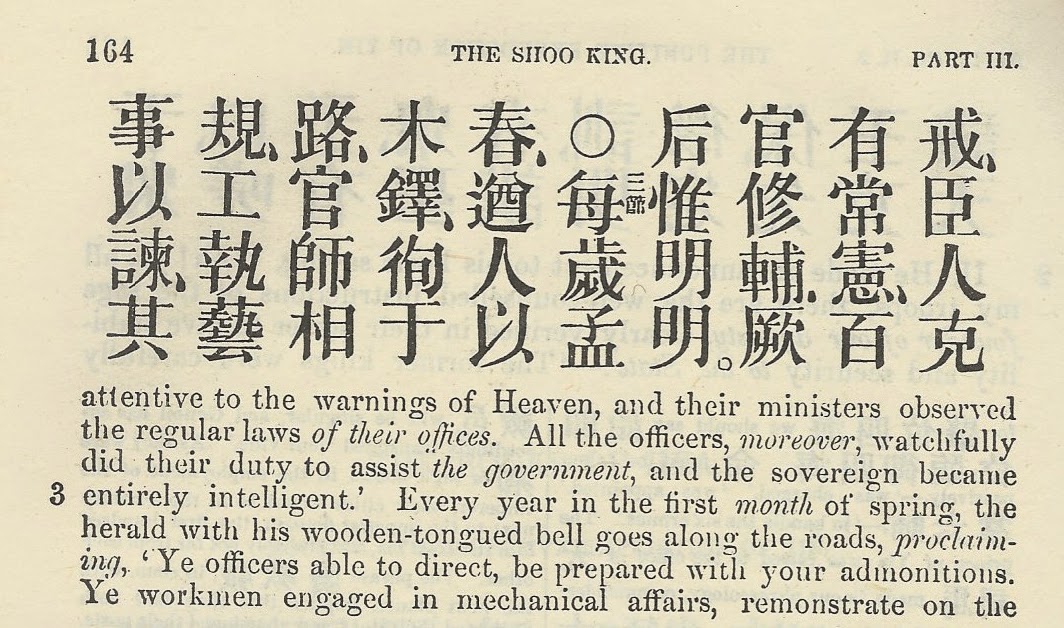 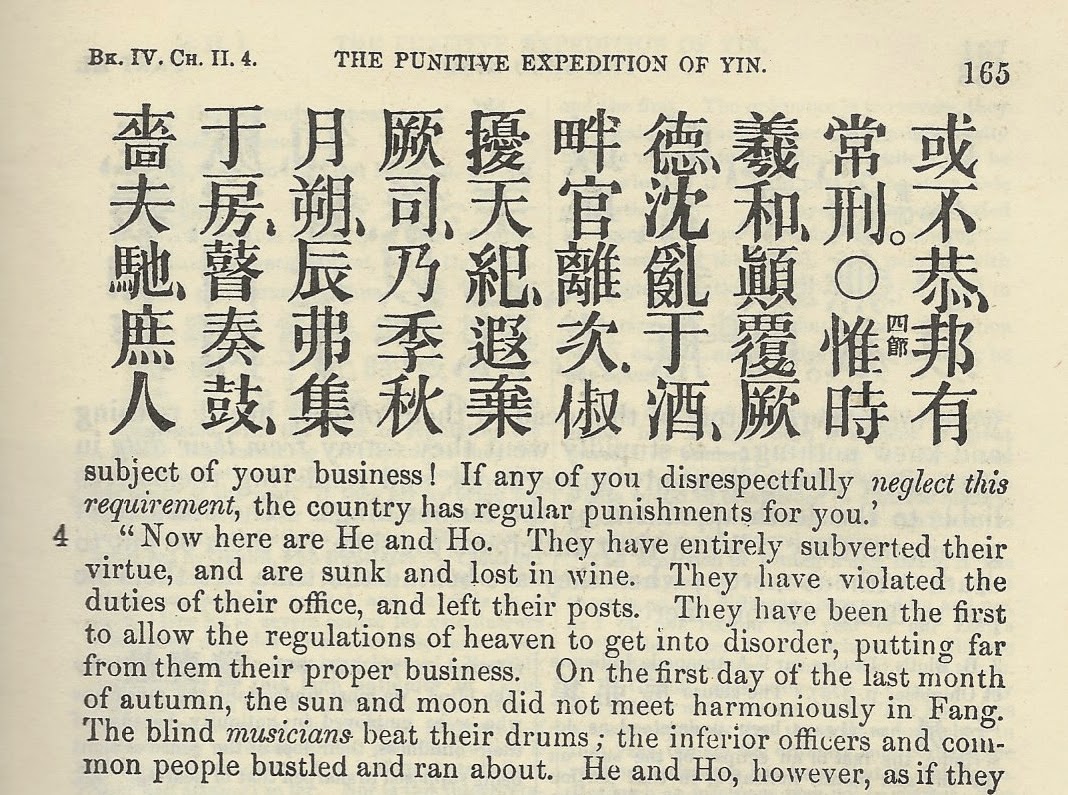 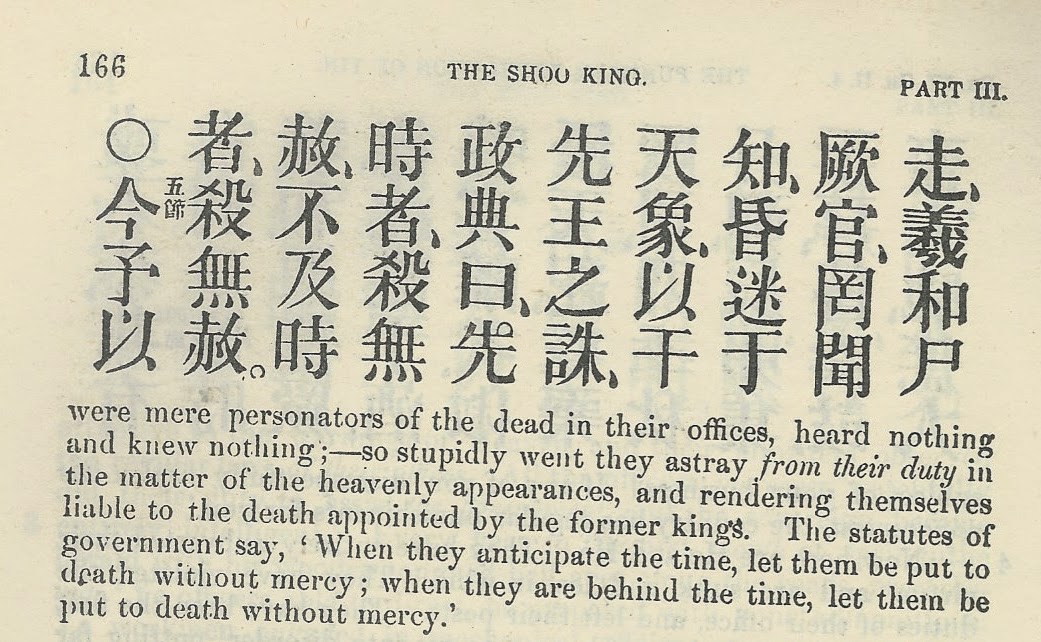 ALSO ON NECESSARY FACTS
Seeing in the Dark: Your Front Row Seat to the Universe
Teaching Science with Science Fiction
Chopmarks
Sacred Silver from the Roof of the World