I patronize the local atheist boutique to buy bumper stickers, pens, pencils, lapel pins, and badges. This one sat on my desk for a couple of weeks. Then, I had a reply. 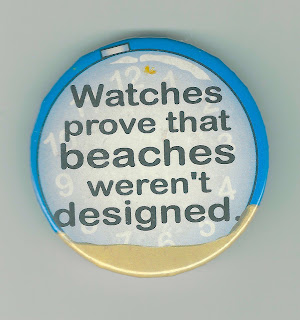 Watches only prove that beaches were not designed to be watches. And in fact, as variable as the tides seem to be to us land lubbers, for people who depend on the sea, the tides are more meaningful than an arbitrary clock, no matter how precise and accurate. You go out when the tide is right, not when the clock strikes an hour.

Our clocks are arbitrary. And we are always re-setting them. Timekeeping based on the rotation of the Earth is corrected against atomic clocks based on the vibration of Cesium-133 when excited by a specific wavelength of microwave radiation.

The fallacy goes to the root of arguments for atheism.  You cannot prove a negative assertion. When you try, you run into non-sequiturs.

When something is true, it is provable many ways. (Over 300 proofs are known for the Pythagorean Theorem.) True statements are supported by other truths, and in turn lead to still other truths.  Truths do not come from falsehoods or lead to fallacies. That is the nature of truth.  Furthermore, when a statement is false, it fails in several contexts, not just one. So, attempting to prove that beaches were not created leads to nonsense statements.

The burden of proof for the creation of the universe, the Earth, or us is with anyone who makes the assertion.  Atheism holds only that, so far, no proof has passed the tests of objectivity, i.e., of empirical evidence explained by a logically consistent theory.

It may remain that the universe, the Earth, and we humans are anomalies: objects or events that are observably real (empirically real), but which lack a logically consistent, rational  explanation.  Quasars and tachyons are in that class.  We discover more facts about them as we observe them more often, but we have no consistent theory to explain them.

Also, while it is true that the universe had no creator, the Earth might have.  After all, we build houses, and cities. So, those are two separate questions. The creation of humans might be a third event, not directly related to the origin of the Earth, which was just here with its evolved animals until “someone” tweaked the chromosomes of apes, merging two and making us.
Be all that as it may – and I have no answers, even for myself – the fact remains that time and tide wait for no man because TIME and TIDE derive from the same root word. In the theoretical construct language “Indo-European” (spoken by our Caucasian ancestors about 6000 years ago),  dã-(i) meant “to part” or “divide.”  In modern German, the word for TIME is ZEIT, which is obviously close to TIDE. And in modern English, we still have archaic words such as Yuletide, eventide, and so on.