Right now, 20 states have active defense forces. Their organizations and responsibilities vary, but, generally, they serve as technical and operational support for the state national guard. They provide response to public emergencies such as weather or man-made disasters.  They cannot be federalized; and they do not [usually] carry weapons. -- [edited 15 March 2017]
While prior military service is common in the ranks, it is not a requirement for enlistment.  Ohio is exceptional in conducting annual physical fitness tests, including  push ups, sit ups, a one mile run, and measurement of waist-to-hips ratio, for active deployment.  Here in Texas, you can join at 65 and serve until you are 70; and you can be extended by special orders.

“The Ohio Military Reserve is a component of the Ohio Adjutant General's Department and serves under the governor as commander in chief. Its primary mission is to provide a fully-manned and mission-ready civil support and sustainment brigade to support the state's Emergency Support Function 6 (mass care) and Emergency Support Function 7 (logistics and resource support) during natural or man-made disasters or other threats to homeland security. In order to accomplish this mission, OHMR units are trained in medical support, volunteer reception and management, shelter management and logistics support in addition to basic soldier skills. Our core competencies are training to National Incident Management System (NIMS), Military Emergency Management Specialist (MEMS), and Federal Emergency Management Agency (FEMA) standards.” -- http://ohmr.ohio.gov

Several states, such as Ohio and Maryland, point to old traditions of citizen militias.  Ohio became a state in 1803.  The Maryland Defense Force claims roots in the 17th century.  (Their website does not mention the war with Pennsylvania.)  However, the modern state defense forces are identified with the Militia Act of 1903 (Militia Efficiency Act or Dick Act), which reorganized the state national guards and defined more closely when they could be federalized.

U.S. Code Title 32 Chapter 1 Section 109 (1916) empowered the states to create their own guard units commanded by the state governor. The Federal government activated the Maryland National Guard to the Mexican border in 1916, along with the national guards of Massachusetts, New York, Iowa, Texas, Arizona, and New Mexico.  World War I brought federal mobilization of all the national guards, creating the need for the home units. (Wikipedia “State Defense Force” here.  Also US Code archived at Cornell Law School and with attributing footnotes at Versus Law.)

“The Dick Act prohibited states from retaining their own militia systems. Ohio was one of the states that chose not to follow the federal mandate and [chose to] maintain such a force. A principal reason for the continuation of the Ohio Militia was the desire to protect Lake Erie. There was no Naval National Guard.” http://oko.ohmr.ohio.gov/join/info_about.php

As in many other states, here in Texas, our state guard  is under the adjutant general’s office, along with the Army National Guard and the Air National Guard.  The Texas State Guard Air Component is primarily a weather service, and also trains for a wide range of other duties. Unlike the other branches - Maritime Regiment, Army Component, and Medical Rangers – the Air Component [often] drills with their active guard counterparts. 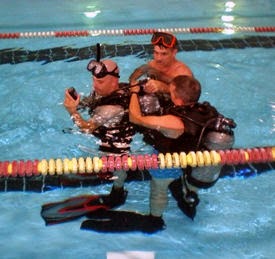 The Texas Maritime Regiment operates dive teams and boat operations for search and rescue and other tasks.  They serve along the salt water coast (367 miles) and the river waterways (4400 miles of major bodies and perhaps that many more lesser rivers, streams, lakes, ponds, and bayous).

“The Maritime Regiment specifically embraces the unique structure and traditions of America’s Naval and Marine forces in preparing troops to carry out  duties related to Texas’ land, marine, littoral and riverine environments. In the interest of creating the most effective response team, TMAR has forged working relationships with various groups such as the U.S. Coast Guard, Texas Parks and Wildlife, Texas Forest Service, and the Lower Colorado River Authority.  The Regiment‘s members are true volunteers who willingly accept military discipline, orders and training to answer the call to meet urgent human needs in times of peril or crisis.”

Generally, across the states, you are a volunteer and cannot be required to deploy. Most states ask for a commitment of a weekend a month. Here in Texas, the promise is at least three years of 200 hours per year. Some drills are only one day. If you are prior military (about half of those enlisted or commissioned), you usually bring your last grade with you. Civilians usually have supervisory experience and often a college education.  Grades ("ranks" private through general), are assigned at first on that basis.


As a volunteer, you are not paid to drill and train. You supply your own standardized and specified uniforms and equipment. Here in Texas, when deployed for an emergency, all personnel receive $121 per day, sometimes with a food allowance of $35 per day, regardless of component, grade, or rank.

[Subsequent to the July 16, 2015, terrorist attacks in Chattanooga that targeted soft military sites - a recruiter and a supply depot - the Adjutant General of Texas was not alone in applying state law and allowing concealed carrying of firearms for those who are so licensed.  You cannot display any weapon you were not issued, but you can have a concealed firearm subject to a permit. Here in Texas, only a magistrate or a peace officer (defined in the state constitution) can ask if you are armed and ask to see your permit.]


Liberty's Kids
Posted by Michael E. Marotta at 5:24 AM