Money is a culture medium for growing viable enterprises into self-sustaining engines of creation. 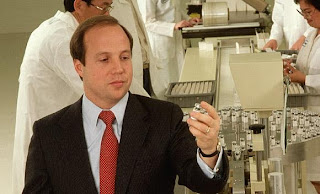 Bob Swanson was 29 when he provided the money for Prof. Herbert Boyer to start Genentech.  Like all overnight successes, the real story is more complicated, with deep roots.  Bright, accomplished, and motivated, Swanson had obvious potential – and a string of failures to show for it.  In the documentary, Something Ventured (see below), Thomas J. Perkins said that his firm, Kleiner Perkins Venture Capital, brought on Bob Swanson, but “there was not much for him to do.”  Swanson said that he would look into biotechnology.  Perkins replied that if something was there, they would be interested, otherwise… And at that point, Perkins trailed off into a gesture and face.  Clues are always little things.

“So we hired Bob Swanson, whom Eugene Kleiner had known through venture capital circles. Bob had worked for Citibank in their venture capital operation and he and had been involved in a failed deal. had been impressed with Swanson's ability to think straight and get things done. So when Bob was looking for a new position, we hired him. That would have been about late 1974. We were in Embarcadero Center Two then, on the top floor.[…]  Bob worked on various deals for us. And, I have to say, not very successfully. , in particular, was increasingly unhappy with Bob. He didn't think much was going to be happening.” – Thomas Perkins [Source 5]

Robert A. Swanson was born in , November 29 1947.  When he was still an infant, his family moved to where his father worked for Eastern Airlines.  He attended MIT and completed his bachelor’s in chemistry in 1969 and followed that in 1970 with an MBA at the Sloan School of Management.  [Source 1] (Wikipedia gives 1970 as the year of both degrees.)

Swanson had read about the research in recombinant DNA and gene splicing.  He sought out Dr. Boyer and asked for 10 minutes.  The two men spent three hours in a tavern.  Swanson’s knowledge of chemistry served him well, as he could understand the nuances in the different techniques being pursued by different researchers.  Swanson saw the market for Boyer’s work.  They launched Genentech on April 7, 1976. [Source 2]

In 1977, Genentech started with human growth hormone by contracting for production with City of Hope Hospital in and with the of at . That allowed Genentech to move up to cloned human insulin in 1978.  They followed that with other successes: alpha interferon, gamma interferon, a hepatitis B vaccine, and thrombolytic (clot-producing) agents for hemophiliacs, and then tissue plasminogen activator (TPA) to dissolve blood clots associated with heart attacks.

’s bilateral East Coast / West Coast dichotomies are easy to cite, especially in technology.  (In Hackers: Heroes of the Computer Revolution, Steven Levy pointed out that the Spacewars video game came from MIT, whereas Stanford gave us Adventure, based on Lord of the Rings.)  But Robert Swanson understood the importance of social capital, built with strong employee bonds.   His scientists could publish their work, something most big drug companies were reluctant to allow.  Also typical of the West Coast, Genentech held Friday parties known as ho-hos.  As Genentech researchers remembered it:

“The Ho-Ho tradition began simply with refreshments for employees every Friday afternoon. At the end of one particularly hectic work week, a manufacturing VP said, "Oh, another Friday afternoon, ho, ho, ho, ho." And the name stuck. …
The Ho-Ho was an occasion for play and absurdity. One time Swanson and Boyer came dressed up as Tweedledee and Tweedledum… But from the start, Ho-Hos were more than just fun. To Swanson, the Ho-Ho was “a wonderful idea, because you need a place where people at all levels of the organization, from the president on down, can get together in their shirtsleeves and talk about the issues, as equals... One of the things you worry about, as you get higher in an organization, is whether people are comfortable telling you the truth about the way they see the needs of the company - where are we screwing up as a company?”

The firm posted a profit in 1979 and went public in 1980. That public offering came at some human cost for the venture capitalists.  Perkins and Swanson disagreed on the timing, with Swanson being opposed to going public.  Eventually, Swanson saw Perkins’s point, but their strained relationship was worse off for it.  Still, Bob Swanson worked as CEO of Genentech through its steepest growth curve through 1990.  Tom Perkins was chairman of the board.  Then, from 1990-96 Swanson served as chairman.  In 1990, Genentech and Roche Holding Ltd. completed a $2.1 billion merger. Initially Hoffman-LaRoche bought a majority interest in Genentech. Then in 2009, LaRoche bought the rest of the stock, but turned around and sold off blocks of it in to the public.

After leaving Genentech Bob Swanson formed a private investment management firm (K & E Management), and served as chairman of Tularik, Inc., a firm researching gene expressions that can be harnessed to produced therapeutics. He also volunteered his time to civic organizations and to his daughters’ soccer teams.

In the book, 1,000 Years, 1,000 People: Ranking the Men and Women Who Shaped the Millennium, (New York :, Kodansha International, 1998) the authors ranked Bob Swanson number 612 for launching the biotechnology revolution.

After a year of battling brain cancer via surgery and chemotherapy Bob Swanson passed away on Monday, December 6, 1999, at his home in . (The Guardian gave it as November 30.)  He was 52.

Disruptive Diagnostics and the Business of Science
Epigenetics