The combat veterans who recommended Joe Haldeman’s The Forever War to me spoke at length about a passing detail and failed to identify the important elements of the plot, the theme, or the setting. It is true that relativistic travel will transform you into a visitor from the past. As a soldier, you will be fighting with archaic weapons. But my officers provided more detail there than was found in the novel itself. And they left out the part where everyone in the future is gay. 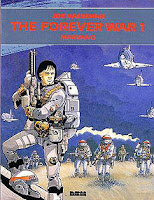 “In my work, it always comes back to the jungle. Walking through the stillness with fear at your back but, paradoxically, the power of life and death in the chunk of metal in your hands. I’ve never been so weirdly alive, and everything I write is refracted through that lens of experience.” -- “Answering the Call,” by Joe Haldeman, Proceedings of the USNI, April 2011.

Haldeman was a combat engineer in Viet Nam. So, from the first appearance as a series in Analog in 1974, and through its republications, the story has been offered as being “about Viet Nam” and consequently “anti-war.”  It is true that the work was shaped by the author’s experience of war. It is also true that some of the elements of the war between Humans and Taurans reflect that earlier time and place. The Taurans are effective collectivists, willing to sacrifice large numbers in concerted actions. They do not invent new technologies but copy ours. Nonetheless, there’s a lot missing: the “bright shining lies” that victory is around the corner, that our local allies share our values, that our local allies are not as bad as or worse than the enemy; the dark truth that many of the people at home, and also many of the conscripts themselves, are actively opposed to the war. The easy wrapper is that the strengths and attractions of this story are transcendent of time and place.

PREVIOUSLY ON NECESSARY FACTS
Building a Team in Fact and Fiction
AFK: Hurricane Harvey
Police in a Global Culture
Shifting the Paradigm of Private Security

Email ThisBlogThis!Share to TwitterShare to FacebookShare to Pinterest
Labels: book reviews, future of the military, science fiction, warrior's way, women in the military