HOW THE MARTIANS DISCOVERED ALGEBRA

How the Martians Discovered Algebra: Explorations in Induction and the Philosophy of Mathematics by Roger E. Bissell (Amazon here in book and Kindle formats) delivers an algorithm for generating Pythagorean Triples. Central to the thesis of the work, Bissell explains how he discovered this by means of induction, not deduction. From there, Bissell takes the reader into number theory in order to validate his new explanation of the proper understanding of multiplication, and to challenge widespread assumptions about the empty set and infinity. 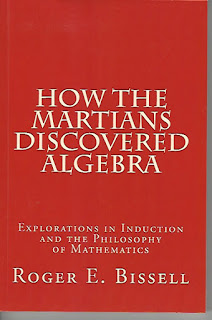 The relationships between music and mathematics go back to Pythagoras. So, this set of essays by musician Roger Bissell enjoys a solid foundation. Bissell also dabbles at mathematics and has several philosophical explorations to his credit, published in The Reason Papers and the Journal of Ayn Rand Studies.

Objectivism is an integration of rationalism and empiricism. Objectivism rejects the false dichotomies of Descartes, Hume, James, and the myriad other philosophers before and after. Consequently, Bissell and other Objectivists provide logically consistent, reality-based and practicable methods for understanding the universe including our inner selves. Objectivism is what the scientific method was intended to be: a guide to living.

That said, this book failed to convince me on several points with which I was pre-disposed to agree. And I concede that the ultimate failure may be mine, not the author’s.

Bissell begins with some techniques in speed math. These discoveries from his senior year in high school demonstrate his inductive method.  They also provide an introduction to his algorithm for discovering Pythagorean Triples. That alone is worth the price of the book. It is easy enough to explain, though hard to show with the typesetting available here. Basically, you want three integers such that a^2 + b^2 = c^2. Easily, there must be some number, x to begin with. The other number must be some number added to x that can be expressed as x+a, and the result of adding their squares must be some (x+b)^2. It all follows from there.

But I had a hard time following it. I tend to read at bedtime. So, I filled my notebook with pages with arithmetic when I was tired. I told Roger that his algorithms did not work. He asked me to send him PDF scans. I did. He corrected my homework. So, I agree that the Bissell Algorithm will, indeed, generate Pythagorean Triples.

Moving forward, Chapter 5, “Mathematics as an Inductive Science”, adheres to the Objectivist interpretation from Ayn Rand, Leonard Peikoff, and David Harriman. The traditional view of induction is expressed as the problem of the black swan: no matter how many examples of anything you gather, the next test can disprove everything you thought you knew. Induction, the traditionalists say, gets stronger and stronger as more examples are revealed, but final proof and final truth are always denied to us. This view is found weakly in the narratives of Richard Feynman and strongly Stephen Hawking's popular work.  (See “Questions about A Brief History of Time” earlier here.) The Objectivist interpretation is that induction is valid if and to the extent that the generalization from specifics is properly based on the correct characteristics. The problem with the black swan is that nothing about “swanness” requires “whiteness.” Swans are not essentially white; swans are not intrinsically white. On the other hand, Bissell points out that water is essentially and intrinsically H2O, which was discovered to be essentially and intrinsically 6 up-quarks and 4 sideways-quarks. Our better understanding did not invalidate the previous truth to the extent that it was, indeed, true.

From acceptable (if not obvious) Chapter 6, “Equations as Propositions,” Bissell moves toward infinity by discussing “Zero as an Operation Stopper” (Chapter 7, which is also about the number One), and the “fiction” of the mathematical Empty Set. There, and approaching infinity (Chapter 8), he loses me; and I am wide awake.

To me, his complaints about the concept of nothing, zero, and the invalidity of infinity and orders of infinity echo the arguments of ancients against the existence of atoms. If atoms exist as the ultimate particles of the existents we perceive, what is between the atoms? Many ancient philosophers rejected the idea of the void: “nature abhors a vacuum.” But if the universe is a continuity of atoms, why are we not locked in atoms like flies in amber?

The ancients (some of them anyway) denied Zero. How can you have nothing? From that comes a denial of the validity of negative numbers, irrational numbers, imaginary numbers, dimensions more than 3 (or 4 or 10), or particles that act like waves.

The problem is language. Language allows us to construct nonsense: Mathematics is green. The Catholic Encyclopedia offers some insight on understanding difficult problems. When we say that a brave man is a lion or a clever man is a fox, we know that we are speaking in analogies. “… but no Theist of average intelligence ever thinks of understanding literally the metaphors he applies, or hears applied by others, to God, any more than he means to speak literally when he calls a brave man a lion, or a cunning one a fox.”  (“The Nature and Attributes of God” ) Mathematics is not green, but 5 can be squared. Language is contextual. Language is analogy. Mathematical symbology is highly abstract and compressed.

Words have meanings because language is based on reality. Whatever stars may be, intrinsically or essentially, categorically, provisionally, or contextually, stars exist and we perceive them. But we identify those perceptions in words not known 100 or 1000 or 10,000 years ago. In discussing the translations in their anthology of Aristotle’s works, Terence Irwin and Gail Fine offer this explanation about a single passage in Meteorologia.  Translated as nearly literally as possible, and allowing for alternative understandings [in square brackets]:

"Substance [essence] is said [spoken of], if not more-wise [several-wise], at any rate in four most; for indeed the essence and the universal and the genus [kind] seem [seems] to be substance [essence] of each, and fourth of these the subject." (See Aristotle: Selections, Irwin and Fine, editors, Hackett Publishing, 1995. Google Books here.)

I accept Roger Bissell’s point that the claim to “orders of infinity” is contrary to common sense. It is obvious that there are twice as many integers as even numbers. Nonetheless, you can, indeed map the “larger” set one-t0-one with elements of the smaller set and keep going forever… to infinity…

The central essay, “How the Martians Discovered Algebra” (Chapter 4) is a parable to demonstrate induction in mathematics as the doorway that opened to the world of algebra.

Bissell's original algorithm for generating Pythagorean Triples is worth the price of the book. If you have any interest in epistemology, mathematics, or the problem of induction, then Roger Bissell's book delivers more for the money.

Previously on Necessary Facts
Elisha S. Loomis and the Pythagorean Proposition
Harriman’s Logical Leap Almost Makes It
Imaginary Numbers are Real: Pegasus is Not
U.S. Patent Law Does not Add Up
Knowledge Maps