Win Bigly: Persuasion in a World Where Facts Don’t Matter by Scott Adams (Penguin, 2017) is a tribute to Donald Trump. It is also a tribute to Scott Adams. The author of Dilbert has been popular online for decades; and he had tens of thousands of readers when, back on August 13, 2015, he began predicting Donald Trump’s victory. Throughout the book, Adams gives himself a lot of credit for that. Adams calls Trump a Master Persuader (in capitals). Trump won because facts do not matter. People make up their minds based on emotion and then cognitive dissonance and confirmation bias provide them with “reasons” to justify their choices. Adams says that Trump could have run on any platform, even Bernie Sanders’. 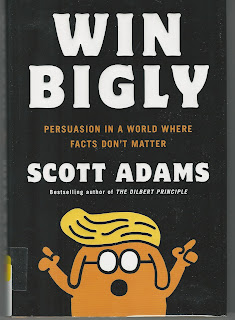 Many of my conservative comrades on the “Objectivish” message boards ObjectivistLiving.com, RebirthOfReason.com, and GaltsGulchOnline.com are enthusiastic Trump supporters. They stand up for his immigration policies, and just about everything else. But it is important to understand that Trump was only selling to them. He is an entrepreneur. I believe that Donald Trump sized up the markets and the demands within them and chose to tap the buyers (voters) along the right wing populist spectrum. Toward the end of the campaign, Michael Moore gave a speech that identified this and seemed to support it right up until the close. So, I agree that Donald Trump could have said almost the very same things and won as a Democrat. But that market was already dominated by Hillary Clinton. So, he played to a market with weaker competition. He also brought in more votes by selling to consumers who otherwise would not have bought any of the existing products. But I believe that Donald Trump is no more emotionally tied to immigration or national defense or global warming than he is to a particular hotel or golf course.

According to Scott Adams, one of Trump’s most successful tactics as a Master Persuader is intentional wrongness. He makes a grandiose claim, such as building a wall along the border. People point out the errors. He might modify his position – he does that often – but it remains that he has framed the discussion, defined the terms, tilted the debate in his favor. Everyone talks about what he wants them to talk about. The border wall, banning Muslims, global warming, Syria, North Korea, whatever the issue of the moment, Trump made huge statements that grabbed headlines, then slowly shifted away from the hardline stance, often to no specific proposals at all. All the while, everyone talked about what Donald Trump told them to talk about.

Adams says that another way that Trump achieves that control and neutralizes his opponents is by flooding the news. He issues so many statements in so many media and so often provocative that news agencies can only report them all and yet be unable to actually focus on any one or a few of them. He did this in the campaign and it made him the most newsworthy candidate in the race.

According to Doug Adams among the many failed strategies of the Democrats was their campaign called “Imagine President Trump...” It was supposed to turn people against him, of course. People who consumed news were supposed to be shocked and disgusted by the picture and thereby vote for Hillary Clinton. In fact, all the Democrats achieved was to plant the vision of President Trump in millions of people. The Democrats did Trump’s selling for him. “Love Trumps hate” was another failed campaign slogan. All it said was “Love Trump…” And apparently, very many people do.

I grant that Donald Trump is a Master Persuader, as our culture accepts that. He can really negotiate a deal. However, I believe that in some of the upcoming engagements, the paradigm the defines the context comes from one of our favorite Christmas movies, Die Hard:  Harry Ellis negotiating with Hans Gruber. 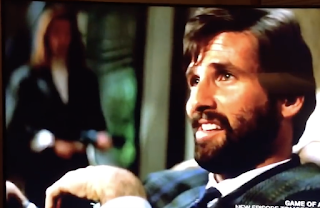 Harry Ellis : Yeah. Now listen, John, they're giving me a few minutes to try to talk some sense into you. I know you think you're doing your job, John, and I can appreciate that, but, you're just dragging this thing out. Now look, no one gets outta here until these guys can talk to the *LA* police, and that just ain't gonna happen until you stop messin' up the works, capisci?
John McClane : Ellis, what have you told them?
Harry Ellis : I told 'em we were old friends and you were my guest at the party.
John McClane : Ellis, you shouldn't be doin' this.
Harry Ellis : Tell me about it. Alright, John, listen. They want you to tell them where the detonators are. They know people are listening. They want the detonators or they're gonna kill me.  (from IMDB.com "Harry Ellis" character )

The difference is that with Vladimir Putin and Kim Jong Un, it is not the negotiator who gets shot.

PREVIOUSLY ON NECESSARY FACTS
Entrepreneurship
Drones are Everywhere
Steve Jobs: One of a Kind
Merry Newtonmas 2017