Celebrating Newtonmas off and on since 1984, this year I honored Sir Isaac by buying myself one of the commemorative 50p coins from the British Royal Mint. 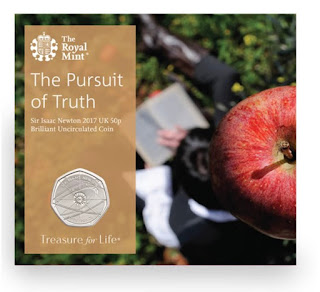 "Near the end of  his life, Newton described  himself to  his nephew and biographer,  John Conduitt, in these pleasant words: 'I do  not know what I may appear to the  world, but to myself I seem  to have been  only a  boy, playing on  the seashore, and  diverting myself in  now and then finding a smoother pebble or a prettier shell  than ordinary, whilst the great ocean of truth lay all undiscovered before me.' 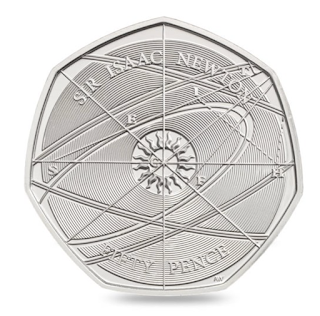 "Two hundred years later, biographer Milo Keynes wrote: 'This  life of apparent serenity was, however, far  from the  truth, for Newton is known to have  had a  most complex and difficult  personality.' His colleagues described  him variously as  fearful, cautious, suspicious, insidious, ambitious, excessively covetous of  praise and impatient of  contradiction. Even his closest relatives and true friends were modest  in their praise." -- "Sir Isaac Newton: Warden and Master of the Mint," by Michael E. Marotta, The Numismatist, November 2001. (George Heath Literary Award, 2nd Place, 2002.)