Once again, we had a great time at Austin’s very literary science fiction convention. They have no filkfest singing, no television stars as guests, and no costume party. Instead, they bring together publishers, editors, writers (past, present, and future), artists, and readers. We spent Friday night through Sunday afternoon attending panel discussions and workshops about the art, science, and craft of speculative fiction, fantasy, and horror. On Saturday, I delivered a presentation, “From Texas to the Moon with John Leonard Riddell” about the first working scientist to publish a science fiction story, here.
Although the first sessions began at 2:00 PM, I started Friday at 6:00 o’clock in the evening with readings of flash fiction by David Afsharirad, editor of Annual Best Military and Adventure Science Fiction.He does not write military SF himself, and these three stories were quirky and cute encounters. I then walked the dealer’s room and said hello to people with interesting displays that I would come back to on Saturday.

Socializing is important. So, assuming a long night of literary discussions over drinks, nothing starts early.

The first panel discussion that I attended on Saturday was on the current state of the Star Trek franchise. The panelists were not screenwriters, or movie reviewers. Only one had published an open Star Trek story though another had an early work published that was "about Commander Data but with a different name."

At 11:00, I sat in on “The Fine Art of Moderating a Panel,” easily, the best presentation at the con. Marguerite Reed moderated. The panelists were Tex Thompson, Patrice Sarath, and Rebecca Schwartz. Reed said that moderating is like being a host at a dinner party. “You are choreographing a conversation,” she said. Bad moderation leads to monopolized conversations, disrespect, and comments instead of questions. Good audience participation requires that you lay down the ground rules as you would with kindergarteners. “We are not here to listen to you. You are here to listen to us.  Questions are not comments. Questions end with a question mark.” Tex said that there comes a time when you have to “pour them a nice tall glass of shut the hell up.” The moderator should know the panelists and develop lines of questions that will draw out their expertise. Keep in mind that the moderator is not the star. Your job is to bring out a variety of viewpoints. I asked for their tips for panelists. Research the topic. “Pop your watch:” time your responses. Know why you are on the panel. Be informative. Take notes before you speak to answer. Do not go rogue. Do not try to moderate. The session closed with suggestions for alternatives to the panel format such as round tables, dinner brigades, and breakfast bars.

At Noon on Saturday, I attended a lecture on orbital mechanics, “Rules of the Road for Flying in Space” by Bob Mahoney. Bob tied the physics to the elements of plot with an animated PowerPoint presentation. An orbit is a clock and a ticking clock brings suspense. Limits to motion are the framework for action. Changes in orbit let you change the plot setting. There was much more and I took a page of notes with drawings.

After my talk, I had a few hours to spend in the dealers room. I bought the current volume of Military SF and Adventure. David Afsharirad autographed it and re-inscribed the three that I bought last year. They and about 20 more books from other tables will be going out to a Texas National Guard battalion stationed overseas. We also bought a steampunk necklace for our daughter’s birthday from Vyktohria.

At 5:00 on Saturday, I attended “Cyberpunk: The Best of Times, the Worst of Times,” chaired by T. Eric Bakutis with panelists Lauren C. Teffeau, Christopher Brown, and David L. Yang. It was a good session for me. I enjoyed cyberpunk in its day. For one thing, I was working for Kawasaki Robotics. Closer to now, I continue to read William Gibson’s later works. The subgenre still rings with truth: “The street finds its own uses for things.” Among the many recommendations from the panel was a story about zombie appliances, Ann McDonald’s “The Revolution Will Not be Refrigerated.” The devices in our Internet-of-things can be and have been taken over and used for denial of service attacks. The future is here, even though I never got that blue mohawk I always wanted.
As much as I enjoyed what was offered, I felt that the panel was behind the times, unaware of other real-world instantiations of the fictional projections from the eighties and nineties. Somewhat later, I chatted with another attendee who shared my views, and we exchanged good words about do-it-yourself biopunk in the real here-and-now.

At six o’clock, I attended “The Fine Art of Writing for Games,” moderated by T. Eric Bakutis, with David Chang, Ari Marmell, and Aaron Orive. It is not a market for me, but I was curious. Writers with book credits get preference. Design is not writing but writing is part of the process. Learn how to script.

Bright and early Sunday morning at 10:00, I rushed to Collecting. The moderator was Scott A. Cupp, with help from Jeremy Brett (curator for SF&F archives at the Cushing Library of Texas A&M) and Troyce Wilson. This was a waste of time and I left halfway through, disappointed by the moderator’s droning monologues about his great purchases. The American Numismatic Association granted me a couple of literary awards and I actively read and write for the Numismatic Bibliomania Society. Back in the 20thcentury, before being hired as an editor by Coin World, I attended several talks by Clifford Mishler, former president of the ANA and president of Krause Publications. According to Mishler, a true collector, whether of coins, stamps, automobiles, or rock ‘n’ roll vinyl, pursues completeness, condition, rarity, and value. At our conventions, we grade and grant awards to museum-quality displays that demonstrate “the collector’s ethic.” Anyone can buy anything with enough money. What counts is knowing what to pursue and staying on the track. So, I was primed to learn about collecting science fiction books and other memorabilia, but reality took a different course. At 10:30, I joined Science 2018.

Moderated by John K. Gibbons with panelists C. Stuart Hardwick, Bill Frank, and Bob Mahoney, the session was less informative but more thoughtful. Like the cyberpunks, the panelists seemed not to know as much about today’s science. That was how I met my collocutor on biopunk. However, a running argument between Hardwick and Mahoney gave me a lot to think about then and since. Hardwick said, “We are having a medieval argument about something far in the future that we need to think about now.” He meant morality; and to him, there is no sense in debating right and wrong about something that is going to happen anyway. Mahoney disagreed insisting that if we do not commit wrongful acts, then those possible events will not happen. Hardwick replied that regardless of what we think, someone is going to clone humans (or whatever) and we need to plan for it. Time ran out….  In the Q&A, I asked the panel for their sources and they cited Science News, AAAS emails, and New Scientist. 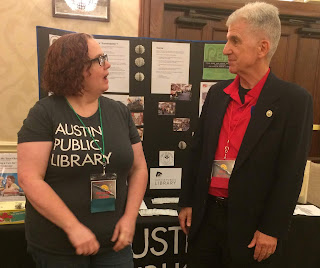 I then went to “Learning to Write.” Moderator Marguerite Reed had help from Cassandra Rose Clarke, Trakena Prevost, Emily McKay, and Amanda Downum. They all recommended Save the Cat by Blake Snyder. Clarke suggested getting started by writing fan fic. Several endorsed the Online Writing Workshop well worth the $50 per year.

“Since 2000, OWW has been helping people become better writers. Our members have made over 1,500 sales to print and online publications, won many awards (including the Hugo), and appeared in Best Of anthologies. Dozens of members have sold novels to major publishers.” --https://sff.onlinewritingworkshop.com

A member of the audience cited Scribophile: “The online writing group, writing workshop, and writing community where writers get quality critiques and feedback on your writing.” -- https://www.scribophile.com/

After a bit of lunch, I went to Once and Future Military SF at 1300 Hours.
(Review continues in the post below this.)

Armadillocon 39
More on The Forever War
Forbidden Planet
Monsters from the Id
All Volitional Beings Deserve Rights
Firefly: Fact and Value Aboard Serenity