The Wizard of Oz and the Anti-Intellectual Tradition

“Every pusillanimous creature that crawls on the Earth or slinks through the slimy seas has a brain. Back where I come from we have universities, seats of great learning where men go to become great thinkers. They think deep thoughts with no more brains than you have.”

L. Frank Baum was a serial entrepreneur, a newspaper publisher, a playwright, and theater producer. With The Wonderful Wizard of Oz, Baum intended to create for his children and their friends an American fairy tale. That claim is supported by two biographies, The Wizard of Oz and Who He Was by Martin Gardner and Russell B. Nye, and To Please a Child by Frank Joslyn Baum and Russell P. MacFall. The Brothers Grimm and Hans Christian Andersen are archaic and often gruesome. Baum’s story is filled with the stuff of 19thcentury America: hot air balloons, colored glasses, and intricate mechanisms. The heroes do not take vengeance on the vanquished. In the next Oz book, women rule the kingdom. A trope used by Aristophanes, it surely reflected the drive for women’s suffrage in Baum’s day. But for all of his cleverness, insight, and intelligence, Baum was not an intellectual. And, to the point here, the successful 1939 cinematic presentation of his story speaks from and to the anti-intellectual tradition. 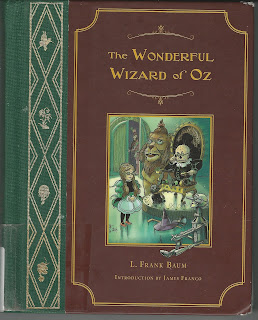 In the book, rather than a grand ceremony, each of the heroes receives their reward privately. The Wizard removes the Scarecrow’s head and stuffs it with bran, pins, and needles.

“Hereafter you will be a great man, for I have given you a lot of bran-new brains.” The Scarecrow was both pleased and proud at the fulfillment of his greatest wish, and having thanked Oz warmly, he went back to his friends.
Dorothy looked at him curiously. His head was quite bulged out at the top with brains.
“How do you feel,” she asked.
“I feel wise indeed,” he answered earnestly. “When I get used to my brains, I shall know everything.”
“Why are those needles and pins sticking out of your head?” asked the Tin Woodman.
“That is proof that he is sharp,” remarked the Lion.

In the movie, the Scarecrow is handed a diploma for his Th. D. degree and he says, “The sum of the square roots of two sides of an isosceles triangle is equal to the square root of the remaining side.” That, of course, is nonsense. But that does not matter. It sounds complicated and it came from a Scarecrow who did not even get fresh bran stuffing. The men at the university (there being no women at university in the common view) have no more brains than the Scarecrow. They only have impressive degrees that empower them to recite silliness.

Numismatists and economists have probably underscored the real meaning of the Scarecrow's brains by reading in allegories about William Jennings Bryan’s “Cross of Gold” speech. Baum clearly took many elements from American culture. He was an active politico, speaking to both Democrat and Republican rallies. The truth may be that as myth, The Wizard of Oz allows us to read our own meanings into its symbols. Whether he intended to lean on the Crime of '73 as he did the use of ipecac and sunglasses is an open question.

My article on the economic allegory within The Wizard of Oz can be found on the ANA Website Blogs here. That presentation was taken from my article in the Central States Numismatic Society Centinel. I previewed that with a letter to the Numismatic Bibliomania Society E-Sylum here. That was from 2009. But the trend continues, demonstrated by this 2016 report about the opinions of retired economics professor David Denslow in the Gainesville Sun.
PREVIOUSLY ON NECESSARY FACTS
What, if Anything did Dorothy Learn?
Anti-Intellectualism in American Life
Captain America
Money as Living History