A Critic Meets the Military

Write about what you know. Every student of journalism, fiction, or poetry hears that from our teachers. Carol Burke was already a professor of English at UC Irvine when she wrote Camp All-American, Hanoi Jane, and the High-and-Tight: Gender, Folklore, and Changing Military Culture (Beacon Press, 2004). That was before she went to Iraq (2008) and Afghanistan (2010). Her experiences probably did not change her from a Democrat into a Republican. She did not become a better writer; her prose is beyond critique—which is why she became a professor of English. But something perhaps ineffable is obvious as a result of her experiences while imbedded with soldiers in a warzone. 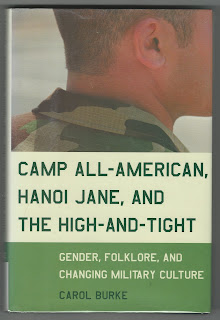 Her book, Camp All-American, is an anti-sexist anti-military diatribe. It was easy to agree with. Her criticisms were more than valid. She was on-target. But others had aced the same firing range. So, like any good marksman, her skill can be credited to her instructors. The problem with Camp All-American is that Burke does not explore the foundations and superstructure of the edifice of sexism.

The subtitle is "... Changing Military Culture" and it has a double meaning. Sociologists tell a joke: How many sociologists does it take to change a lightbulb? The lightbulb does not need changing; it is society that must be changed. So, Prof. Burke is not chronicling the changes going on at that moment or before or to come, but her intention to change the military to be what she wants it to be. And what she wants is not bad or wrongful. In fact, it is the way the military has been headed since the first female chief petty officer in 1917 (Navy Live blog here).


Even so, I agree with Burke's major premise: the military treats women differently from men in ways that have nothing to do with the objective requirements of the job. For instance, women are forbidden  from the high-and-tight. Female "short" hair styles must be at least one-quarter inch long. If the rationale of the military were accepted prima facie, every boot would get a buzzcut.  It is just one point among many that are easy to accept yet annoyingly shallow for want of analysis.

Exploitation has three excuses: gender, race, and class. They are braided, though in a particular time and place, one skein may be larger or dyed brighter than the others. Generally, in America, we are classless, sometimes with an unfortunate double meaning. We have been trying hard to get passed race; and, mostly, in the middle of the culture, we have been successful despite the agendas of guilt and hate (also intertwined) from the extremists of the left and right. And the fact is that the military followed baseball in racial integration, ahead of Brown vs. Board of Education and the marches in the south. Racial equality in the services should be a model for gender equality. Burke draws no parallels there.

Sex and gender have genetic roots that define the sociology, economics, and politics of sex and gender. Ultimately, the solution may be epigenetic. When gender enjoys the mobility and mutability of race and class, it will cease to be casus belli—at least for most people, though probably never for the radicals.

Burke is not alone in her revulsion for the confluence of sex and violence among military men. She accepts it as a perceptual primary. So, she offers no conceptual causes.

She does soft soap Jane Fonda. I did not know that Fonda apologized for her "insensitivity" during the Vietnam war.  Several times. See here and here. But the problem is complicated and Burke does not follow all of the paths of inference. Jane Fonda's tourist visit to an anti-aircraft gun was not a momentary lapse, but a moment within an integrated life. All of her other choices seem to line up pretty well with that. Under the influence of Jane Fonda Ted Turner became a benefactor of the United Nations.

To say that the military is “conservative” has little to do with the election strategies of Paul Ryan and Marco Rubio, except as they, too, reflect, a long, broad, and deep cultural matrix. We accept that military people are in families. To enforce Spartan barracks would seem unnatural (here and now). Yet, about 20,000 to 25,000 military families benefit from food stamps, and other federal family support subsidies. (See Military.com stories here and here.) Every soldier (sailor, airman) knows the cliché: If the Army wanted you to have a family, they would issue you one.

And barracks today are sexually segregated, just as they were separated by race until after World War II—and as they are still separated by class: officers sleep better than enlisteds, even in the very frontiersy Texas State Guard.

Statistical surveys of the military carried out by military leaders (on NecessaryFacts here) reveal an unsurprising geographical bias for the South and the West. The interplay between regional conservatism and military presence is hard to ignore. Per capita enlistments from Massachusetts are not what they were in 1776 or 1861. Only a well-defined liberal elite believes that the military could benefit from the traditional liberal education at university. Most people in America, Democrat and Republican, believe that it is good, right, and proper that the military stands aside, alone, and apart with its own ethical and moral standards.

Nonetheless, it is paradoxical yet unsurprising that enlisted soldiers (sailors, airmen) are statistically aligned with the country at large. Forty percent feel this way; forty percent want the other thing; and 20% are undecided. Among officers, the story is different. And the higher you go, the farther to the right you drift. The more conservative you become, the better your chances are for promotion. Inevitably, liberals self-select themselves out after the first six to eight years.

So, attitudes about class, race, and gender linger in the highest echelons. Change erupts from below. As non-European non-men inevitably achieved rank and rating military culture changed. But it did not radically alter overnight. Nor could it. To expect that is to wish for the unreal. Yet change does happen. We have no lawful, legal nobility in America. And even in England nobles are now tried before juries of commoners.  Social change happens. But it happens one mind at a time.

I was no stranger to war. In December 2008 and January 2009, for two months before heading off to Afghanistan in 2010, where I served as a cultural advisor to two brigade commanders …
[…]
We traveled to small villages, to the few remaining schools in the heavily Taliban-influenced district, and to the large local bazaar with its long line of dirt-floored stalls where over a hundred merchants sold farm supplies, veterinary medicines, motorcycles, materials for making I.E.D.’s (improvised explosive devices), drugs intended for the local clinic that had been mysteriously diverted to this makeshift drugstore, boots, plastic pails, decorated metal trunks, CDs that featured what some soldiers referred to as “the latest Taliban Fight songs,” naan, potatoes, raisins, produce in season, and freshly slaughtered lamb.
Rather than improving, security in this area became worse each month. When I had first traveled to the base, we could go twelve kilometers before encountering a tic, short for “troops in contact.” Within nine months, the circle of safety had shrunk to one kilometer.
A soldier in whose vehicle I often rode received a package from his young son, and amid the toiletries, candy and cookies was a five-inch plastic toy. At first, he simply propped the toy on his dashboard to remind him of his son, but after the first firefight from which he safely returned, the figure accrued talismanic meaning, and the soldier turned away the toy that he believed was his protection so that it no longer faced him, but instead looked out the windshield. It was as if, like a charm, it had the power to ward off the enemy’s evil eye.
Many personnel brought small tokens given to them by parents, children, lovers and fellow soldiers. Some were objects of faith —medals, rosaries, prayer beads, angels, crosses, gold and silver lockets with verses of the Quran tucked inside. Others acquired their significance from one’s relation to the giver. Still others accrued meaning along the way. What might be considered minor trinkets back home takes on a new meaning when one ventures into harm’s way.
(“In the Event of My Death” by Carol Burke here: http://narrative.ly/to-be-read-in-the-event-of-my-death/)