I watched Captain America: The First Avenger expecting no more (and hopefully no less) than the other superhero movies. But I liked the character because we share the same virtues. I bought the movie on DVD. I also shopped the comic book stores and subscribed to a current series. I now have a shelf of Captain America stories; and I went through half a dozen graphic novels from the library. But I did not find the origin story that I was looking for. The origins are all the same, yet all different. From being a non-descript and anonymous teenager, he became an artist. He was reborn many times, at least once as the Red Skull. He grew old and was rejuvenated. He was replaced by Sam Wilson, Bucky Barnes, and then by his own son (by the Black Widow), James Rogers. None was the story told in the screenplay by Christopher Marcus and Stephen McFeely.

Myths are not merely repetitions of traditional stories. The retelling changes as we change. The definition of fiction (from Aristotle) is that drama shows what could be. Moreover, the telling must be integrated, whereas historical events just happen, seemingly without reason (and therefore without rhyme). I believe that now, 2500 years later, we do demand and get integrated narratives from historians. That being as it may, the fact remains that enduring popular fiction changes to meet the needs of the audiences. According to Joseph Campbell that has always been true. In the retelling of myths, characters can be split off or merged. Some retellings transmogrify characters into their opposites. But always, the poet speaks to the audience of the moment.
In The Virtues of Captain America: Modern Day Lessons from a World War II Superhero, Mark D. White argues for a continuity of character in The Captain despite the many authors who penned the narratives. Of course, he represents the best aspects of the nation he personifies. He does not just beat up bad guys – though he did a lot of that, and not much more, in the Silver Age of the 1960s. Nonetheless, he went to Vietnam twice, the second time to rescue a kind of Medecins sans Frontiers doctor. The Captain is honest, courageous, persevering, and loyal. Above all, he is honorable. 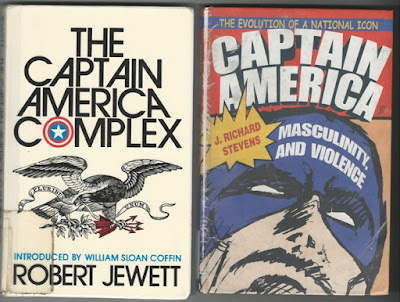 On the other hand, for many people, America is not inherently good; and, therefore, as its embodiment, The Captain is also flawed and perhaps evil.

The Evolution of a National Icon: Captain America, Masculinity, and Violence by J. Richard Stevens also encircles The Captain with the negative energies of our culture.

Despite their leftwing titles, both books are approximately objective, though selective, in teasing out the threads of a long-running story. What that story means depends on who you are.
Two scenes in the movie resonated with me. When Colonel Philips tossed out the dummy grenade, Steve Rogers threw himself on it. “Well, that’s what I’d do,” I said. “You would??” Laurel asked. It is not the sentiment of a Randian egoist. “Hand grenade comes into the foxhole, everyone’s dead anyway. You might as well do what you can to save the others.” It is not a rational decision but a heartfelt response. The other scene was the flag pole climb. I would not see the outside-of-the-box answer right away. I would have to sleep on it – which is why I am not a field commander or even a department manager-but it would be clear to me eventually that there is a better solution. 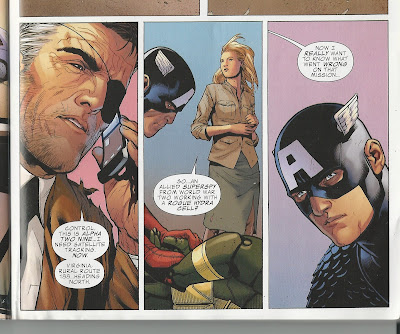 Today, everything is complicated.
"An Allied superspy from World War II working with
a rogue Hydra cell. Now I really want to know what
went wrong on that mission."
(Man out of Time by Ed Brubaker, the longest-running writer.)

For one thing, though not 4-F, I was 1-Y in the draft. Like Sheldon Cooper and Leonard Hofstadter, I was never anyone’s choice to be in their squad in gym class. All I asked of my body was to carry my brain around. When I joined the Texas State Guard, my friends and family were surprised, if not shocked. I was never in favor of any of America’s military adventures. But the TXSG is not issued weapons; and we cannot be sent overseas. We are Texans serving Texas. The physical requirements are minimal but when I enlisted, November 22, 2014, having just turned 65, I found that I could do zero push-ups and zero sit-ups. Fortunately, I was always a walker. So, clearing the mile under time was the first win. Now, what I cannot do is 20 push-ups. This morning, I did 31 sit-ups. No serum. No vita-rays. Just the will to succeed and to do better the next time. That, too, is easy to find in the mythology of Captain America.

PREVIOUSLY ON NECESSARY FACT
Superman: American Alien
The Girl Who Owned a City
Firefly: Fact and Value Aboard Serenity
Neal Adams at Dragon's Lair
Anthem as a Graphic Novel