The Age of Selfishness: Ayn Rand, Morality, and the Financial Crisis by Darryl Cunningham (Abrams, 2015) is a closely written and tightly integrated misinterpretation of Ayn Rand’s life, her works, her philosophy of Objectivism, and the causes of the market collapses of 2007-2010. This book is a graphic novel because Cunningham is a cartoonist. His drawings can be crude, but are often essentialist and representational. He does sublimely capture people, often through their coiffeur and stance. But his work is never fine, detailed, or realistic. This book is largely a running monologue that needed no illustrations. The author claims that the popularity of Ayn Rand’s ideas among American (and British) conservatives caused the mortgage meltdown and subsequent bailouts. 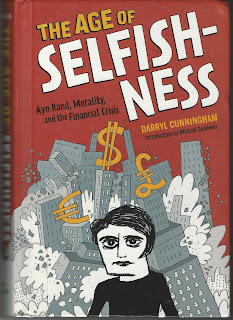 Cunningham latches on to all of the negatives of Rand’s life and disparages the few successes that he acknowledges.

What I find most interesting in this and similar attacks is that no one seems to be motivated to rip apart Karl Popper, Ludwig Wittgenstein, Jean-Paul Sartre, Jacques Lacan, or Richard Rorty for their foibles. We can condemn Thomas Jefferson’s relationship with Sarah Hemings without dismissing the Declaration of Independence as a hypocritical façade to justify the theft of lands owned by the British crown and its loyalists. Ayn Rand is different.

Cunningham takes the time to make his case. The 231 pages begin with Ayn Rand’s life (Part One), explain the details of the financial contractions (Part Two), and then tie the first to the second (Part Three). His sources include biographies of Ayn Rand by her nominal admirers, Barbara Branden, Ann Heller, and Jennifer Burns. Ultimately, the thesis is not supported because the summary rests on omissions, flaws, and fallacies. Of necessity, the author contradicts himself.

Cunningham does nod to the virtues of traditional conservatism, though he finds them not as powerful and promising as progressive liberalism. We need to be conservative in order to preserve the family, social order, and the freedoms we enjoy in our democracies. He presents World War II as an example of that. The error here is that Ayn Rand was not a traditional conservative. (And she was not alone in being less than sanguine about America's role in World War II.)  She called herself a “radical for capitalism” explaining that capitalism rests on a foundation of reason in acknowledgement of reality. Cunningham admits that Rand was opposed to the war in Vietnam, the draft, and laws against abortion. He fails to identify Rand as having been as “liberal” as she was “conservative.”  It would be possible to criticize Rand’s novels and her philosophy as an expression of unbridled liberalism. 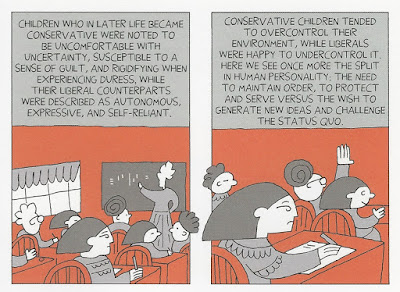 Her heroes are socially disruptive. In Anthem, The Fountainhead, and Atlas Shrugged, the bad guys are the people in power who fear change. In the last two, the wealthy and powerful are mediocrities. The heroes also achieve wealth, but do not pursue power. (In The Fountainhead, the pursuit of power destroyed Gail Wynand who “was not born to be a second-hander.”) Her heroes famously stand on their own, especially in confronting adversity, a virtue that Cunningham identifies with children who grow up to be self-identified political liberals.
Cunningham never grasps the fact that Objectivism is a personal philosophy. Rand’s heroes live sparsely; her villains are ostentatious. Ayn Rand’s heroes are more concerned with their own place in the physical world than in the society around them. Personally, I find that the conservatives who discovered Ayn Rand's works only through the Atlas Shrugged movies think that this is all about politics. Hank Rearden had a mansion to house his family, not himself. And it was his family that oppressed and exploited him. The government’s interference was just a footnote in his life. He cut the chains of government regulation only after he was able to get himself an apartment in the city.
The central failure of Cunningham’s thesis is that the personal morality of Objectivism would never suggest, support, justify, or excuse the acts committed by the people who caused and profited from the financial crisis of 2007-2010. Those men were portrayed in The Fountainhead as Homer Slottern the successful businessman who was terrified by religion and in Atlas Shrugged as Mayor Bascom of Rome, Wisconsin, who turned a quick profit buying and dumping the remains of 20thCentury Motors. The Fountainhead also has looter architects, among them the hooligan Gus Webb, just as Atlas Shrugged’s villains include Mr. Mowen and Orren Boyle among the businessmen with Washington connections.

Cunningham’s story contains a kernel of truth. However, deeper than the mechanics of shady deals was the lack of integrity of the dealers. “Do you think integrity is the monopoly of the artist? And what, incidentally, do you think integrity is? The ability not to pick a watch out of your neighbor’s pocket? No, it's not as easy as that. If that were all, I'd say ninety-five percent of humanity were honest, upright men. Only, as you can see, they aren't. Integrity is the ability to stand by an idea. That presupposes the ability to think. Thinking is something one doesn't borrow or pawn.” Kent Lansing to Howard Roark in The Fountainhead (Chapter X, p. 333; via Wikiquote) “Honesty is the recognition of the fact that the unreal is unreal and can have no value, that neither love nor fame nor cash is a value if obtained by fraud...”– Galt’ Speech.