Pictures of a Distant Country: Seeing America Through Old Paper Money by Richard Doty (Whitman, 2013, 296 pages, $24.95) is a "coffee table" book replete with enlarged, full-color images of banknotes and other fiduciary paper from the 19th century. Dr. Richard Doty is the senior curator of the Smithsonian Institution’s National Numismatic Collection where he has had 27 years to study, organize, and display the tangible artifacts of our nation’s financial history.

Numismatics delivers the substantial evidence of our economic history.  Even great scholars such as Ludwig von Mises, Friedrich A. Hayek, and Murray N. Rothbard blundered because they never collected, and therefore were ignorant of the basic truths of what money is, and how people use it. Unlike otherwise very nice but run-of-the-mill efforts that organize the subject either by denominations by year of issue, or by series of issue by denomination, this book honors the American people according to our occupations, families, classes and social statuses, as well as by our own views of whimsy, entertainment, accelerating technology, and national mythology.
Doty begins by explaining the origins of our paper money.  For 200 years Europeans found everything in North America except the one thing they hoped most to find: precious metals.  (Gold was finally discovered in and in the early 1800s.)  Tobacco, wampum, and other expedients were short-lived substitutes.  Paper money, backed by public authority was the lasting solution.  was first in 1690.  By the middle of the 1800s, paper money was established as the traditional medium of large-scale commerce.  Paper money also achieved a consistency of design and presentation with “a central vignette, or more portraits to the left or right of the central scene, and a smaller representation bottom center.”  These illustrations are now our windows to the past.
The simple fact is that few teachers or professors even know about the rich array of private bank issues in the 19th century. This only opens the door for the student who chooses to pursue an independent path to discovery.  Here we have images of how Americans perceived themselves, and (more importantly) how they wanted to be seen.

Our nation expanded urban civilization, as it also was built by yeoman farmers, and, admittedly, by an agrarian society carried by slave labor.  Industry and manufacturing play a large role, of course, as do shipping, railroads, and farming.
While the hand that rocks the cradle rules the world, she did not design the banknotes of the 19th century that portrayed woman as “temptress, saint, and helpmeet.”  By the 1830s, women had been astronomers, mathematicians, even pirates, but we do not meet any of them on banknotes, which, like many women themselves, were considered the property of men. The deeper problem of portraying "woman as..." would not have been understood. 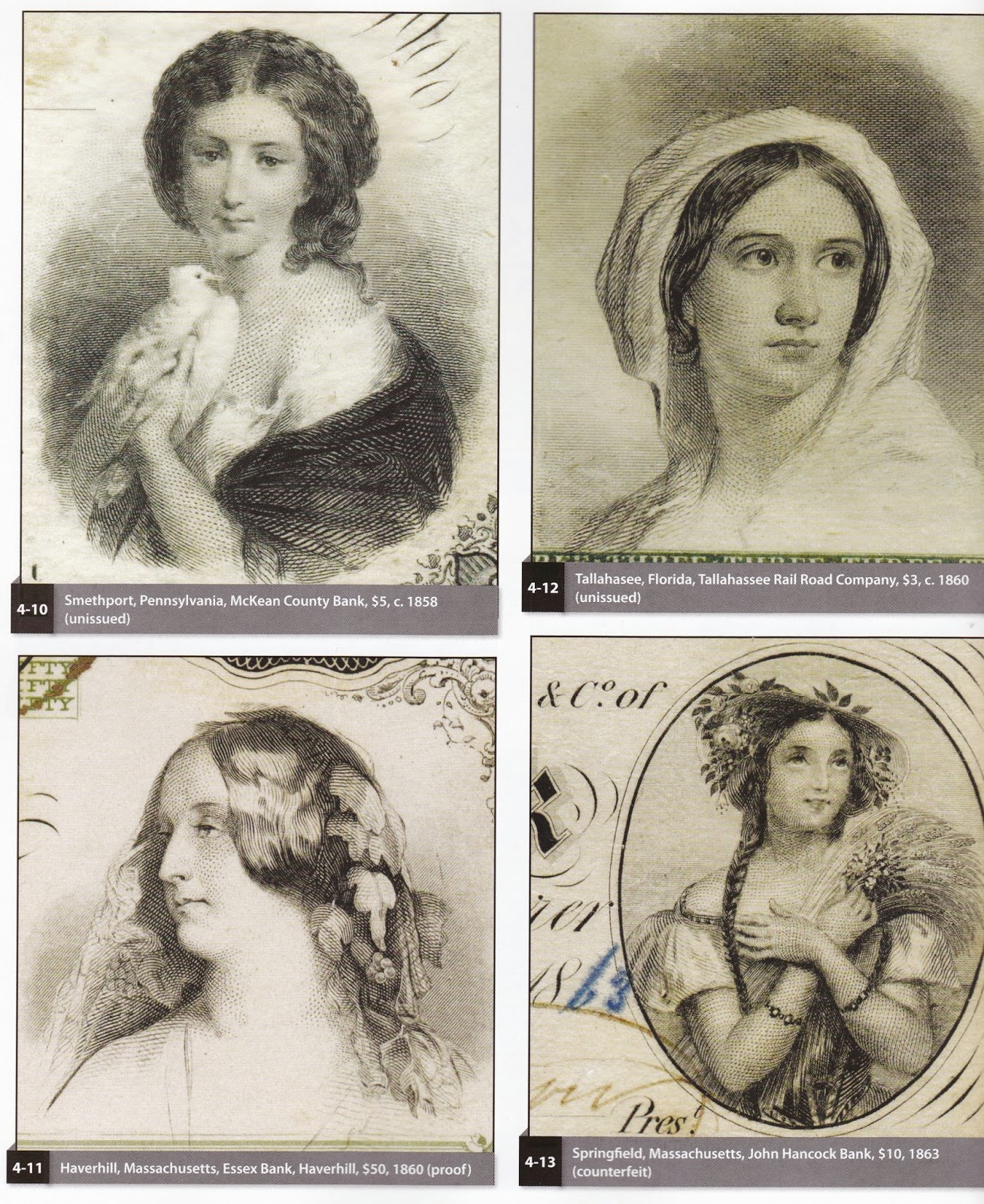 Nonetheless, here is a deep treasury of images narrated by a person whom it is easy to nominate as ’s leading scholar of money.  In 2011, Richard Doty received the Huntington Award of the American Numismatic Society “in recognition of outstanding career contributions to numismatic scholarship.”

ALSO ON NECESSARY FACTS
Money as a Crusoe Concept
Workers Paradise Promised an End to Money
How Much is that in Our Money?
The Art of Finance
Industrial Medals as a Currency of Fame
Posted by Michael E. Marotta at 12:56 PM