THE MAP THAT CHANGED THE WORLD

William Smith (1769 – 1839) drew the first geological maps of . He was born into a culture that was certain that the world had been created at 9:00 AM on Monday, October 23, 4004 BC.  He died twenty years before The Origin of Species was published.  Yet, he invented the predictive science of geology by marking time with fossils.  In the hour of his success, his work was stolen shamelessly by the gentlemen of the Geological Society.  He was forced into debtor’s prison and spent 20 years homeless, working as best he could in the rural countrysides and counties far from .

William Smith’s father was a blacksmith and so his formal education was minimal. But he was determined to make something of himself; and by 1794, he worked as a surveyor for the construction of canals.  Eventually and soon he was recognized as the man who could solve practical problems in draining farm fields and predicting where profitable coal fields were to be found.  He recorded his daily work in a continuous multi-volume journal.

Those notes let him create a series of huge colored maps showing the rocks and strata of .  (He eventually included more of .)  The keys to his work are two interlocking discoveries.  First, the rock strata are uniform.  Everywhere the strata are the same. Even if some (unknown) process or force (apparently) has displaced or tilted the layers, they can be logically reconstructed into a continuity.  Second, while sandstones and marls and limestones and all the others are to be found repetitively layer upon layer in succession they can be differentiated one from another by the fossils within them. No identical fossil forms ever appear in two different layers of the same kind of rock.  Simpler forms of the same animals are found lower down. 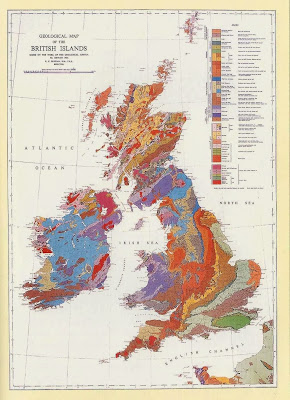 We know now that cycles running millions of years repeatedly created land, drowned it, and then lifted it up, separating some plates as others collided.  Smith knew nothing of that; and neither did anyone else.  The dilettante gentlemen who robbed Smith of his creation debated whether all rocks precipitated from the ocean or whether all rocks were born of volcanoes.  Anything more complex was beyond their range.  Smith, however, was not at all a British Empiricist.  The men who stole his work were.  Their chief, George Bellas Greenough, denied the validity of theory.  But Smith’s work depended on it. The gentlemen of the Geologic Society attempted to produce their own map (from Smith’s work) without theory, and failed.  They had to admit to the correctness of Smith’s method, as well as to the value of his labors.

Simon Winchester’s biography of William Smith takes you into the fields of .  He stops to explore and explain.  His college degree from St. Catherine’s is in geology.  However, after exploring , among other adventures, most of his career has been in journalism.  (His website here.) Winchester has several popular books to his credit. I read The Professor and the Madman about the Oxford English Dictionary over a decade ago.  His most recent book is The Men who United the States: 's Explorers, Inventors, Eccentrics and Mavericks, and the Creation of One Nation, Indivisible.

Seeing in the Dark: Amateurs and Astronomy
Fantastic Voyages: Teaching Science with Science Fiction
Misconduct in Science and Research