For most of the history of life sciences, major discoveries were made in labs less sophisticated than today’s kitchens … Laser meat thermometers. Handheld blenders. Microwave ovens. Ziploc bags. A steady supply of electricity, clean water, and refrigeration.

Biopunk: DIY Scientists Hack the Software of Life by Marcus Wohlsen (Current Penguin, 2011) does for the next generation of homebrew science what Steven Levy’s Hacker’s Heroes of the Computer Revolution did for the previous transformation from a world based on industrial manufacturing to one dependent on information services.  The next revolution will transform our inherited legacies into self-made potentials. 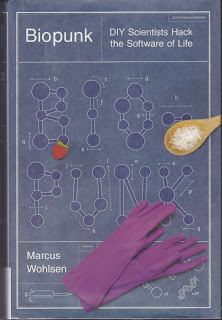 Each of us is an individual.  Individualism is not an abstract political idea.  It is a biological fact.  The consequences of genetic individualism serve as one large motivator for many of the innovators and inventors spotlighted in this book.  Many of the biohackers who build labs in kitchens, closets, and garages, seek to get beyond the medicines for mass populations, to discover the origins of individual problems and find the one exactly right solution for that person.

A point not made explicitly by Wohsen or Levy but fundamental to them both – and in reply to Pres. Barack Obama and Prof. Elizabeth Warren on the question of who built what: invention comes from individuals. Even with Wikipedia and Google, we do not share a collective mind.  Someone had to invent the shovel before “we” could build roads.  Not everyone employed in a government laboratory – or for a pharmaceutical firm – innovates invents, creates, or discovers.  As both Wohlsen and Levy demonstrate, those new ideas and processes come from outside the norm, beyond the expected, without approval or permission – or even funding.

Biohacker Kay Aull’s father was found to have hemochromatosis: his body absorbs too much iron. It is a genetic defect. She carries the gene, also.  Kay Aull verified this by building her own laboratory test in her kitchen for under $100.

Like the replication and mutation of DNA itself, Wohlsen tells the essentially the same story about very different people working in their own ways on problems they find interesting.  They hack processes on the cheap to replicates that for which industry and government laboratories pay catalog prices in the hundreds of thousands of dollars.  Meredith Patterson built her own “LavaAmp” thermocycler for polymerase chain reactions. J. Chris Anderson, Raymond McCauley, Anne Wojcicki, Linda Avery, Aubrey deGrey, Guido Nuñez-Mujica, and a dozen others have their own hacks, their own missions.

And they rely on commercial labs as needed.  In fact, the wet lab as a marketable service is one aspect of this new revolution.  In addition, the biohackers have conferences and meet-ups of their own, while they also attend mainstream events.  Many have advanced university degrees; some dropped out of college to pursue biohacking.  Many of them know each other, just as Bill Gates and Steve Jobs crossed paths in .

This is a global phenomenon.  Wohlsen tells of the cotton farmers of the Gujarat state of who arguably captured and then remarketed a Monsanto product, Bt Cotton, now known variously as BesT Cotton, Navbharat 151, etc.  ’s Law for computers found a generation every 18 months.  Biology trims a few months off of that.

Biohackers also eschew the secrecy that surrounds genetics research.  Billions of dollars are at stake.  Competition is fierce.  Corporations have every incentive to keep their knowledge base proprietary, secret, and then when announced, locked in patents.  But this retards progress.  Despite the claim that patents “promote the Progress of Science and the useful Arts” (Art. sec. 8. of the Constitution), the historical evidence is that openness works much better.  Biohackers share information.

You cannot have heroes without villains.  The bad guys hang out in the halls of Congress.  Bart Stupak represented northern which is still Paul Bunyan country; he is now retired and working as a lobbyist.  Stupak called frontline genetic research "snake oil."  Henry Waxman still speaks for Beverely Hills.  They led and lead the gang that would crush biohacking with new federal laws.  Those laws would prevent you from resequencing your own DNA to fix your own problems.

Unfortunately – something of modern trend in books like this – the notes are in the back; and lack direct references such as numbers or asterisks in text, but are listed by page number and key phrase.
This book is an excellent introduction to the open community of biopunks and gene hackers.  Wohlsen provides websites, citations, and other supporting documentation. If you are looking for a biohacker conference or website, or want to join a meet-up, this is a good overview of the culture, its arts and industries.