You Only Have to be Better to be Equal 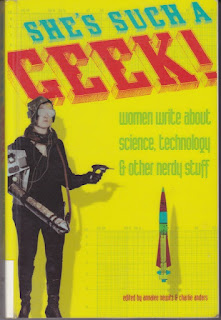 She’s Such a Geek: Women Write about Science, Technology, and other Nerdy  Stuff, Annalee Newitz and Charlie Anders, eds., (Seal Press, 2006) is an anthology of autobiographical vignettes.  In each, you meet a woman.  Some are introduced as girls.  One enters when she was a man.  Overall, each found fun, validation, achievement, intellectual challenge and social challenge in her attraction for science, technology, engineering or mathematics.  Generalizations are not easy.  These are 24 insightful essays from a field of over 200 entries.  As a guy myself, I do not get much chance to spend all the time I want with two dozen female nerds.  This is highly recommended.

Over on Prof. Mark Perry’s blog, Carpe Diem (now with the American Enterprise Institute) are numbers about the huge gender gap in the SATs, the Scholastic Aptitude Tests that figure so largely in college admissions.  The reality of the gap is unarguable. So are the social policy implications.  On the almost-free market blog, OrgTheory, is a link about gender bias in science research hiring.  Even women who head labs preferentially hire and pay men in excess of women with equal qualifications.

The full depth and breadth of prejudices active in our society is astonishing and disappointing.  While Asians tend to score higher on SATs than Caucasians, they need to: the averages are that an Asian needs to be 140 points higher to get into the same college program as a non-Asian.  The fear is that we will have “too many” in college, as 100 years ago Ivy League WASPS worried about having too many Jews and limited their enrollment, despite their qualifications.


Incidentally, SAT scores are at a 40-year low.  (Washington Post here.) But do not blame public education.  Soviet agriculture almost worked.  Maybe this experiment just needs to run a little longer, too…

The widest policy implication is that our culture is collectivized to the point where individual achievement is difficult to perceive.  Should we adopt numbers in place of names?