Arguably Heinlein’s last juvenile novel, the story is a shoot-‘em-up. I got lost in the jargon of military organization. I accepted at face value that as a corporal Juan Rico could not be promoted to assistant section leader over his platoon assistant leader, but I still have no idea what that means. Reading Heinlein’s philosophical arguments are the reward for being immersed in his futures. The movie version of Starship Troopers made the case more succinctly and forcefully than the book: When you vote, you call upon the full power of the state to do your bidding; and no one should do that who does not understand what it means. The Socratic dialog in the book that delivered the justifications for requiring military service as a condition of full citizenship was easy to jump in and argue against. 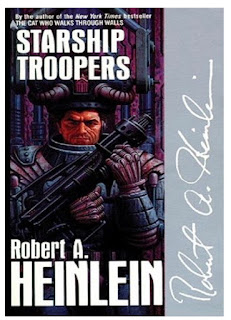 That theorem has a corollary: You cannot vote while you are in uniform. According to Heinlein's philosophy, until you complete your military obligation, you have not earned the right to vote. In real life, Ulysses S. Grant, Dwight D. Eisenhower, George C. Marshall, and George S. Patton refused to vote while serving in the Army. (See "I Fight for Your Right to Vote. But I Won't Do It Myself," by Maj. M. I. Cavanaugh in the New York Times for Oct. 19, 2016 here.)


The minor premise of Heinlein's command doctrine is interesting to consider, and we have come to absorb some of it: everyone who wants to serve has a role. After graduating from Annapolis (1929), Robert A. Heinlein was cashiered from the Navy (1935) for tuberculosis. He recovered and lived a normal active life. Today, although military fitness standards have just gotten tougher, amputees with prosthetics have been returned to active duty, even to combat.

I saw the movie on disk a couple of years ago, but very many years after reading the book. So, I read it again. I was looking for the story of the senior Rico, Emilio, the hero’s father, who enlisted after Buenos Aires was nuked. Emilio Rico was a corporate CEO from Harvard Law School. But his portrait is a shadowgraph. My intent was to write his story as a project in placing and selling military science fiction stories. “Write what you know” is the basic rule. I know the old man who enlists late in life but the Harvard lawyer is an alien.

Most of the book delivers Heinlein’s vision of the ideal boot camp. The infantry fighting is out of army field manuals. (Joe Haldeman's Forever War is the better ground battle.) Heinlein served aboard the aircraft carrier USS Lexington. Sgt. Juan Rico’s time aboard the Rodger Young is easy to understand and identify with. Write what you know.