On Saluting the Flag

When I leave home for drill, I am in uniform. I salute the flag when I step outdoors to load my vehicle; and I salute it again before I get into my car and drive off. When I come home, before I leave my vehicle, I put on my cover and I salute the flag before going indoors. Once inside, I change into civilian clothes and stand down the saluting as I unload my vehicle. I do not otherwise acknowledge Old Glory except to unfurl her if the wind has wrapped her around her pole. But what other people do is their own business. 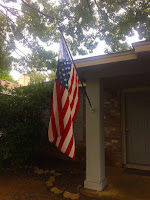 When I joined the Texas State Guard, I took this oath of office:
“I, MICHAEL MAROTTA , do solemnly swear
that I will bear true faith and allegiance
to the State of Texas
and to the United States of America;
that I will serve them honestly and faithfully
against all their enemies whomsoever,
and
that I will obey the orders
of the Governor of Texas and the orders
of the officers appointed over me,
according to the laws, rules and articles
for the government of the Military Forces of Texas.”

Someone who does not salute the flag of the United States is not (necessarily) an enemy of the USA or Texas. They might be a citizen of Canada. They might have religious, philosophical, or personal reasons of their own.

Flag salute. Jehovah’s Witnesses believe that bowing down to a flag or saluting it, often in conjunction with an anthem, is a religious act that ascribes salvation, not to God, but to the State or to its leaders. (Isaiah 43:11; 1 Corinthians 10:14; 1 John 5:21) One such leader was King Nebuchadnezzar of ancient Babylon. To impress the people with his majesty and religious ardor, this powerful monarch erected a great image and compelled his subjects to bow down to it while music, like an anthem, was being played. However, three Hebrews—Shadrach, Meshach, and Abednego—refused to bow to the image, even on pain of death.—Daniel, chapter 3.  Watchtower Online here

You can read Billy Gobitis’s letter to the Minersville School Board, at the Library of Congress American Memory here.

“And then Nate Boyer saw Kaepernick sitting and got mad.  Boyer is a former Green Beret who played football briefly with the Seattle Seahawks, and with the Longhorns at the University of Texas before that. After his initial anger of seeing Kaepernick sitting, he wrote the player a letter, saying he wished Kaepernick would stand up, but that he was willing hear him out about why he was sitting down.
“So I urged him to stand and then take action, because that's really how change will happen, and he said, “No, I'm committed to sitting until I feel that things are changing and that we're moving in the right direction.” And so through that conversation, I guess, we agreed on a middle ground of him taking a knee alongside his teammates.”
On why kneeling was better than sitting
“For me, that's a sign of reverence. You know, people take a knee to say a prayer. And then also, military personnel, it's very common to see an image of a soldier, or a marine, or an airman, or a sailor, take a knee in front of a fallen brother-in-arm's grave to pay respects. So, I just thought it was better, and it showed more about — that he's paying attention as well, he's not, in a sense, sitting it out. He's engaged.” Original NPR All Things Considered story from 17 October 2017 here.  Audio reply of 9 September 2018 ATC broadcast presenting further on the same subject. 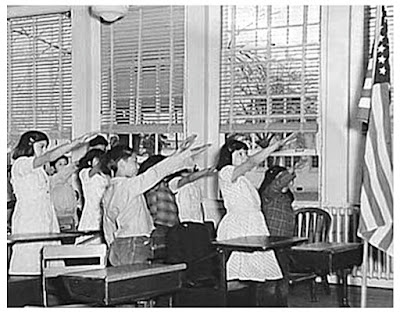 This was how my mother learned to salute the flag in the 1930s. The Pledge of Allegiance was crafted by a socialist, Francis Bellamy. He also founded a magazine called The Nationalist.