On September 26, 2018, the Texas Military Forces Museum at Camp Mabry received a gift of two pay warrants issued to sailors and marines of the Texian Navy. They are now part of the permanent collection of the Texas Military Forces Museum and will soon be on display. The pay warrants were donated by Michael E. Marotta and received by the Museum Director, Jeff Hunt 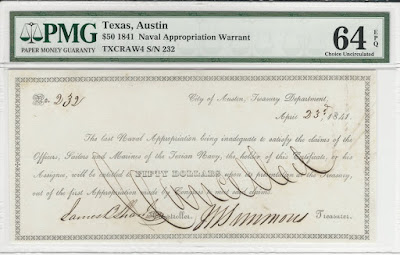 Like other Texas Republic paper money, the promissory notes quickly lost value and few were ever redeemed. These pay warrants were actually cashed in and cancelled. In April 1841, on the verbal orders of President Mirabeau Lamar, $200,000 in promissory notes were printed, signed, and handed out mostly to Texian Navy sailors at Galveston. 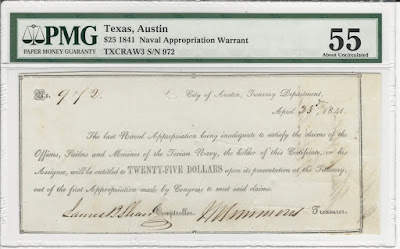 However, the only money available came from $8,000 in silver coin paid to the Texian Navy by Mexican federalist rebels at Yucatan. Very few promises were honored. Most of the silver pesos from Yucatan went for much needed repairs to the ships. Also, Sam Houston was not a supporter of the Navy. As soon as he was re-elected President in December 1841, Houston repudiated the notes. Houston so distrusted the Navy that at one point in 1838 he declared them all pirates, ordering any lawful ship to arrest them and bring them to Galveston for trial. 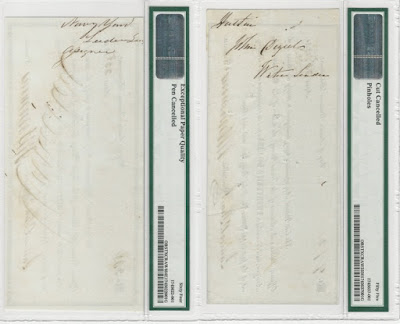 The notes are signed by the Comptroller, James R. Shaw, and the Treasurer, James W. Simmons. They are endorsed on the back by the men who whom they were given. Both notes are cancelled.
The $25 promise carries the endorsement of John Deziel. The $50 note was paid to a Navy Yeoman.
PREVIOUSLY ON NECESSARY FACTS
THE TEXAS NAVY
THE SOMERS MUTINY
MAKE YOUR BED
FROM JOINT FORCE TO UNIFIED COMMAND