On December 1, 1842, aboard the U.S. Brig-of-War Somers, as captain of the ship, Commander Alexander Slidell Mackenzie ordered the execution by hanging of an officer and two sailors on the charge of mutiny. He had held no court-martial. The leader of the mutiny was Philip Spencer, the son of the Secretary of the Navy. When the Somers docked in New York, Mackenzie faced a court-martial on five charges: murder on board a United States vessel on the high seas; oppression; illegal punishment; conduct unbecoming an officer; cruelty and oppression. He was found not guilty but he was also relieved of command. 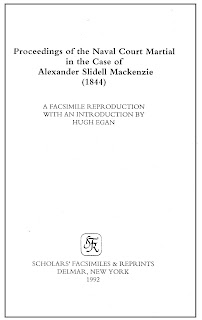 It was complicated. And every aspect reflected the character of America at that time.

The Somers was created to be an interceptor to fight piracy and slave trade. She was sleek and fast, and heavily armed for her small size. She was also a training ship. There was no Naval Academy. (Founded without funding in 1845, the Academy’s own history points to the Somers affair: https://www.usna.edu/USNAHistory/) Built for a crew of 90, she carried 120, of whom 100 were apprentices 12 to 18 years of age. Mackenzie was working with Matthew C. Perry to establish a system of training ships, in order to provide the U.S. Navy with a cadre of professional officers.

Mackenzie was born Alexander Slidell. He added his uncle’s surname to his own. Unlike many other Americans, it was not to distance himself from disgrace but to attach himself to success. Slidell’s family was prominent in both New York and Washington politics. His brother, John Slidell, became a senator from Louisiana. (Sen. Slidell was loyal to the Confederacy. See, also, the Trent Affair and the USS San Jacinto.) Among the officers on board the Somers who decided the fate of the mutineers were Matthew C. Perry, Junior, and Oliver Hazzard Perry II. Another midshipman was Henry Rodgers, son of John Rodgers, hero of the Quasi-War with France, the Barbary Wars, the War of 1812, and eventually Secretary of the Navy. Young Rodgers and the Perrys were cousins by marriage; and the Perrys were nephews-in-law to Mackenzie.
The court-martial trial was sensational. It was the first mutiny aboard a US Navy ship—arguably the only one ever, the Port Chicago Mutiny having been on land. The actors were all public figures. Among the reporters and commentators for the press were Herman Melville and James Fenimore Cooper.

According to historian Buckner F. Melton, Jr., (A Hanging Offense: The Strange Affair of the Warship Somers, Free Press, 2003), Naval officers of the time called their regulations “the rocks and shoals.” In addition to the Articles of War, Congress had published a Black Book of naval regulations. The Navy had a Blue Book of its own, and a Red Book, and hundreds of ad hoc rules from Secretary of the Navy (1838-1841) James Kirke Paulding. An amendment to the Blue Book canceled all regulations therein which contradicted the Black Book. The uncharted dangers of sea law being whatever they were, the Articles of War always took precedence. According to them, the captain of a ship had no legal authority to convene a court-martial in response to a mutiny.
Commander Mackenzie’s defense was that he acted in extremis. The close quarters and over-crowded billeting did not permit any secure location for holding prisoners until a port of jurisdiction could be reached. Moreover, the mutineers, or at least their leader, Midshipman Philip Spencer, intended not only to slay the officers, but to throw “the small fry” overboard as well because they ate much and were of no use. Furthermore, Spencer’s goal was to turn the Somers to piracy. For that, she was superbly well-designed. No merchant ship could out-gun her and no navy could catch her. Spencer spoke to his co-conspirators of murdering the crews of other ships and having their way with any women they found aboard before tossing them over.

When confronted by Mackenzie, Spencer said several times in response that it was all a joke. In the face of that weak excuse, it came out that Spencer had spoken of mutiny and piracy on his two previous postings, one of them aboard the U.S. flag ship John Adams. Moreover, he actively ingratiated himself to certain seamen by giving them tobacco and (against all rules) rum, both of which were stolen for him by another crewman. For that, when found out, the sailor had received twelve lashes. In fact, twelve lashes with a cat-o’-nine-tails was the worst punishment available to the captain, hopelessly insufficient in the face of a mutiny by perhaps as many as 20 of his adult crew.
A minor point worth noting: Commander Mackenzie absented himself from his officers' deliberations. They came to their verdict without his immediate influence. Closer to our own time, after the Bay of Pigs disaster, when faced with the Cuban Missile Crisis, President John Kennedy also left the room while his advisors debated their available options.

In response to a classroom mutiny over a controversial point of law, one of my criminal justice professors said, “You do what you have to do and you live with the consequences.” And so it was for Commander Alexander Slidell Mackenzie.

I learned about the Somers incident from the television show “Mutiny” Episode 23 Season 6 of JAG. Col. Sarah Mackenzie is preparing a review of Cdr. Mackenzie’s court-martial as a mock trial for the U.S. Naval Academy. That gave the writers the opportunity to put the cast in a dress-up play in her imagination, which they (as other writers for other shows) did before and since.  We found the series because Season 8 Episodes 20 and 21, “Ice Queen” and “Meltdown” premiered the NCIS cast ahead of their spin-off, which we back-filled to complete our NCIS collection. We picked up NCIS because we liked Mark Harmon’s portrayal of Secret Service agent Simon Donovan in The West Wing; and researching NCIS, I learned that producer Donald P. Bellasario served in the Marine Corps.

PREVIOUSLY ON NECESSARY FACTS
The Fourth Star
The Fallibility of Fingerprinting