“Even those who learn from history are surrounded by those who are doomed to repeat it.” – Chuck B. on Twitter, April 12, 2016. 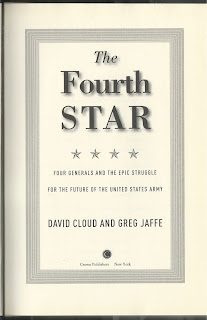 The Iraq War tested four four-star generals: John Abizaid, George Casey, Jr., Peter Chiarelli, and David Petraeus. This is their story. (The Fourth Star: Four Generals and the Epic Struggle for the Future of the United States Army by David Cloud and Greg Jaffe, Random House, 2009.) Each of them had a correct view of the challenges and answers. However, without being able to work together, their efforts could not support and reinforce each other. They were not in conflict against each other. Rather, their assignments – and their acceptances of those roles – left them distanced in space and time from each other. Beyond the specifics of the Second Gulf War, this is a book about leadership, leadership styles, and the natural limits to the complete fulfillment of our goals. The narratives here are richly detailed. The writing is tight and active. The authors were the Pentagon correspondents for the Wall Street Journal, the New York Times, and the  Washington Post.

Each of these four generals is an outside-the-box creative thinker. Each is competitive, driven, focused and intelligent. All hold advanced university degrees. Though Petraeus and Casey are connected by family ties within the military general staff, Abizaid and Chiarelli came from blue collar homes. Whereas Casey and Abazaid graduated from West Point, Chiarelli and Petraeus earned their commissions through ROTC. On their way to the top, each took detours within the military. Chiarelli and Petraeus taught in the social science department at West Point. “Sosh” is a fraternity of strategic planners and political thinkers whose connections in the Pentagon allow them to help younger peers get their careers back on track with assignments to combat brigades. Interestingly, Lt. George W. Casey, Jr. first met Lt. David Petraeus through their mothers. Casey’s father was a two-star general. That put Elaine Casey in the same social set as Peggy Knowlton, also the wife of a general, and George Petraeus’s mother-in-law. When Casey was finishing Ranger School, his mother called him and told him to introduce himself to Petraeus who was headed to the 509th Parachute Infantry, the unit Casey had just left. (page 21)

Ethnically Syrian, Gen. John Abizaid is a second-generation American whose foreign language in school was French. He learned Arabic later, completing his MA from Harvard in Middle Eastern Studies with a year at the University of Jordan in 1979-80. In 1985, Major Abizaid was assigned to a UN mission during the Israeli occupation of Lebanon. His experiences gave him an understanding of the problems that the US would face in Iraq. He believed that sectarian divisions, discord, and violence are endemic to the Middle East: no military solution is possible. He accepted the Powell Doctrine: crush the conventional forces of a conventional opponent and get out before you get bogged down in another Vietnam. As the commander of CENTCOM, Abizaid was responsible for the work of the other generals who were charged with delivering a successful conclusion to the invasion of Iraq.

Gen. George W. Casey, Jr. earned his BS in International Relations at Georgetown in 1970. An ROTC student, he expected to repay the army with four years and then go to law school.  Instead, he followed his father, Brig. Gen. George W. Casey, Sr., who was the commander of the 1st Air Cavalry Division when he was killed in Vietnam. (His father also attended Georgetown, earning an MA in international relations in 1958 before completing an MBA at George Washington in 1965. Much more in Wikipedia, of course.) Casey, Jr., went on to complete his MA in international relations at the University of Denver in 1980.  “George had become an expert in navigating the middle ground between his Georgetown friends and his family. He generally supported the war [in Vietnam], but wasn’t the kind of person to get in arguments or begrudge his friends their opinions. Neither was his dad.” (pp. 6-7)

Serving in Kosovo in 2000 was Casey’s experience in peacekeeping and counterinsurgency. Having labored to broker a ceasefire for one village, he saw the truce shattered when rifles and hand grenades were found in the home of the village mayor who had been on the negotiating committee. It taught Casey that the US military cannot keep the peace in a country that does not want the peace. But, like all soldiers, he served those who called.  “Just three months before the invasion [of Iraq] he assembled a small group of active and retired officers that was rushed to the Middle East to deal with electricity generation, clean water, and other expected postwar problems.” (p. 162)

Tasked with restoring the nation while fighting the insurgency, Casey’s plan was to draw the resistance into the government to defuse them, to make them part of the solution, and let them hassle out their problems within the structure of the government. That, too, failed.

Western political theory accepts majority rule that is always limited by constitutional law and tradition. That did not apply in Iraq. The authors do not mention that Saddam Hussein ruled like other strongmen by balancing his opponents against each other, while also favoring his power base. That meant oppressing the majority Shiites and minority Kurds, and giving power to the Sunnis. The fall of Saddam Hussein left the Sunnis at the mercy of the merciless Shiites who now controlled the government of Iraq.

Also here, the reader today can see the roots of the ISIS Caliphate. Back then, moderate Sunnis united with the Shiite authorities to fight radical Sunni Islamists from Al Qaeda who were making life hell for everyone. But it was too little, too late.

Peter Chiarelli earned his BS in political science at Seattle University where he did his ROTC. (He later completed a master’s in public administration at the University of Washington in 1980. He was granted an MA in national security strategy from Salve Regina University. Wikipedia.) Rejected three times for law school - poor at standardized tests, apparently - he entered the army. Sent on orders first to earn the master’s, Chiarelli was tapped for the social science department at West Point. He loved the challenge of teaching. He did not have to take a position personally in order to advocate it. In one class, he said that the US invited the attack at Pearl Harbor by encircling the Japanese and threatening them. Disagree as they did, the cadets were only allowed to argue back with facts. It was good training, both for them, and for him.

Chiarelli’s goal in Iraq was to win the war by rebuilding the economy. Instead of big-ticket projects to highly-placed defense contractors like Bechtel, Chiarelli wanted many small projects paid for immediately to clean the streets of garbage, to restore electricity to neighborhoods, and to distribute clean water.  He was successful. Sunni fighters left their guns behind to do the simple and dirty work of civil engineering in their neighborhoods. When the money stopped, they went back to being insurgents, and life got worse for everyone. The Sunni grievances were real. Shiite death squads under the cover of government legitimacy as police and security forces pushed the Sunnis out of mixed neighborhoods. The government closed the only bank in Sadr City, forcing Sunnis to travel through deadly Shia territory. Gen. Chiarelli’s rebuilding faltered.

General Petraeus was the most conventional of them though his winning strategy was contrary to the wisdom of the time. (Petraeus completed his doctorate from Princeton while he was teaching in the social science department at West Point.) Petraeus pushed for the deployment of 21,000 additional troops – called “The Surge” – to bolster the failing occupation. However, rather than stationing them in huge bases with swimming pools, and a BX the size of a Walmart, he placed them in 120 small detachments close to the civilians. They also worked as advisors and supporters to the Iraqi police and army who were tasked with keeping the peace. The first advantage was that the Iraqi people, civilians and military both, would stop seeing the occupying force as distant and aloof, but in and of them as collaborators. Moreover, the soldiers would come to know the people, not only gaining valuable intelligence, but also becoming less likely to stereotype the locals. More to the point, the strategy came with an exit policy: eventually, the US forces would minimize, and the Iraqi role would strengthen. The first happened. The second did not.

In the Middle Ages, military authority and civil authority were identical. As Europe reawakened, the military was subordinated to civilian control. Ever less often did dukes, kings, and emperors lead their troops into battle.The capture of Napoleon III at Sedan in 1871 was the dunce’s after school lesson. And military dictatorships are notoriously unsuccessful. So, the modern army carries out the orders it is given. The Second Gulf War was not just winnable: it was won. The fifth largest army in the world melted and evaporated. We then met them again in a new fog of war, a war that could not be won. Sometimes, being brilliantly intelligent is just not enough.